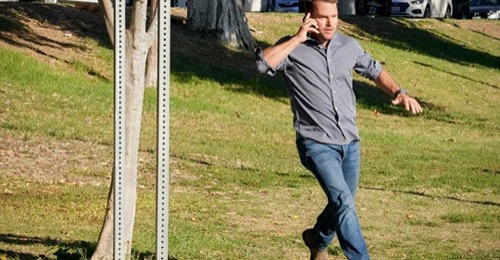 The team faced a possible security breach. They were called in because a strange young woman came to their office and she was holding a box. The box was suspicious because it could be a bomb. It also said “Hello NCIS” on it. Therefore, this woman knew where she was and that she wasn’t supposed to be there. NCIS’s building was off the grid for a reason. They didn’t want their many enemies finding them so easily and so this woman came out of her way to find them. Her face, however, wasn’t recognizable.

At least not to the team. They had never met her and the woman wasn’t showing up on any of their databases. It was like she was a ghost. The team would have liked to have questioned her except she wasn’t talking and the only thing she seems to care about was the box. The box meanwhile wasn’t a bomb. It was simply a box with two items inside. There a letter that quoted “Dante’s Inferno” and there was also a hand. The hand belonged to a former CIA Operative. The guy retired several years ago to go into private consulting and there was admittedly a chance one of his enemies caught up to him.

Barrett Fimmel trained assassins. He was technically responsible for each person those operatives went on to kill and so someone could have taken his hand to prove a point. It could be a message about how he was the one truly guilty, but it didn’t make sense why the culprit would then send it to NCIS. NCIS was still figuring that out when they went to Barrett’s home and found the rest of him. His blood was found in teacups and the upper half of his body was staged to stand upright in his bed. It was one of the oddest scenes the team has ever come across.

They thought that would be the end of it until suddenly their culprit called them. He had called himself “the fallen son” and he asked them to tell his mother he was coming home. The team hadn’t known what he meant by that. Then they talked to Hetty. Hetty said she was “mother”. She also said they were looking for Akhos Laos who had been a young boy that was abandoned by his family because they thought he was devil-born and so Hetty took over his care. She trained him. She would have liked to have finished his training and unfortunately, Fimmel took the boy away from her.

Fimmel trained Akhos into becoming a killer. Akhos did as he was told for a while and then he supposedly died a couple of years ago. At the time, everyone thought he was dead. There was no deeper investigation into it and Hetty had never even mentioned him to the team. His survival now is what’s forcing her to tell her friends what happened. She told them that Akhos was like Callen and it made Callen’s friends feel for him. They all knew that Callen had been pushed into this life. There was never a moment where he chose it and Sam for one thought Akhos was justified in being angry.

Akhos was robbed of a childhood. He never received a chance to choose what he believed in or what he should fight for and so Sam touched base with Callen because he wanted to know if Callen ever felt that way as well. Only Callen didn’t feel like opening up. He shut down the conversation and tried to ignore the similarities between him and their killer. Sam and Callen tried to go after Akhos. They used Hetty as bait and they waited for Akhos to collect her. No sooner did a henchman pick her up that the comms room went dark.

Nell and Eric were left blind. They didn’t know how to track Hetty and so Sam and Callen were derailed for quite some time. Nell and Eric had to work to get comms back under their control and by the time they did that – their locator was saying Hetty was in the middle of a lake at Echo Park. It also didn’t help that a body was supposedly found in the lake. The boys raced to the park to see if it was Hetty and thankfully wasn’t. Her other locator pin said she was in Downton and so the techies slowly tried to find her even as the rest of their team was put in danger.

Kensi and Deeks went to a location they thought held Akhos. They went there and then they were separated. It turns out they walked right into a trap. Deeks was locked in a room with a bomb and there was nothing Kensi could do. She tried breaking down the door. She kept calling the bomb squad. She even tried getting Sam on the phone because he was their resident bomb expert, but nothing seemed to work and Deeks was telling her to give up. Deeks didn’t want his wife dying too. He told her she should clear the area and she was going to do it before she saw that there was one more option left.

Kensi tied a rope to the door and she then tied the other half to the back of a car. She then used the car to rip off the door thereby freeing her man and the two escaped the building without getting hurt. Luckily, the rest of the team were also making head waves. Sam and Callen track down Hetty. Sam took care of the men outside and Callen was going to face off with Akhos. And while he thought it would be easy, Callen was losing the fight when Hetty appeared and she killed Akhos to protect him.

Hetty stayed with Akhos until the very end. She had loved him once upon a time and she didn’t want him to die alone.

Akhos’s allies including the mystery woman all fell after he did.

The mystery woman was identified and she gave Special Prosecutor Rogers information he needed.

Not that it mattered wot Callen when he finally decided to ask Hetty about the other young men she “mothered” over the years.