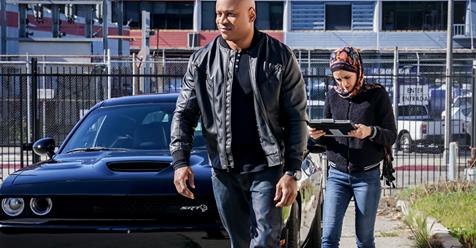 Tonight on CBS NCIS: Los Angeles returns with an all-new Sunday, March 31, 2019, season 10 episode 19 called, “Searching” and we have your weekly NCIS: Los Angeles recap below. On tonight’s NCIS Los Angeles season 10 episode 19, as per the CBS synopsis, “DoJ Agent Lance Hamilton asks Sam for assistance in locating a former U.S. border patrol tactical officer who disappeared following a threat by the cartel. Also, Kensi and Army CID Special Agent Steve Evans partner on a dangerous mission to recover a stolen hard drive with sensitive military intelligence on it.”

Sam was contacted by his old friend Hamilton because as it turns out someone wanted a favor. The favor was for Sam and the team to investigate the disappearance in the Valley. It didn’t sound like much, but this family was going by the name of Harris and the truth was that their name was Wallace as in James Wallace. He was a former Border Patrol agent who after a raid had gotten into a fight with a cartel member that led to the perp dying. It hadn’t been his fault and he wasn’t in trouble or anything. Only this cartel member was well-connected to a gang in operating in Texas and so a man named Ortega had put a hit out on Wallace for what he did. Wallace and his family were forced to go into hiding and they were there until suddenly a family was reported missing matched the details of the family.

Sam decided to take Special Agent Fatima Namazi with him to investigate. His normal partner was out on leave after getting injured in a hostage rescue mission that went awry, but Callen didn’t mind staying in LA because he got to spend time with his nephew Jake and catch up. He hasn’t seen Jake in a while because he wasn’t on speaking terms with his sister Alex and so it had been a miracle when Alex called him. Callen was literally the last person she wanted to turn to for help and it ended up being a good thing he was available because she needed someone to babysit at the last minute. She dropped Jake with him and then she was out there. Which Callen thought he could still turn into a good thing except it was awkward between him and his nephew. They used to be really close and now it’s like they don’t know each other.

Callen would typically turn to Sam when he didn’t know what to say to a kid, but Sam was gone and he was getting involved in something dangerous. He and Fatima went to go carry out surveillance on a bodega and he couldn’t go into the store because he stuck out like a sore thumb. Therefore, Fatima volunteered. She went in alone to sus out the scene and she was almost taken hostage for her trouble. She was asking all the wrong questions and so two guys pointed their guns at her. Fatima tried to get the guys to lower their weapons and when that didn’t work she kept them busy until Sam showed up with Hamilton. Both Sam and Hamilton wanted to know what was happening with the trigger happy duo and it was revealed that they recently survived an attack on their store. Its what made them a little jumpy and so they didn’t mean to threaten Fatima.

Fatima still got her hands on the security cameras from the store and she went through all of them as they searched for information on the gang. They found out Ortega was arming his troops and they even caught a sign of him with a member of the Wallace family, but it wasn’t James Wallace that was being forced into a car. It was his wife Christina. Christina was taken hostage instead and so it seemed like Ortega’s plan for vengeance could have been to kill someone that James loved. James still missing along with his daughter Amanda and so Fatima thought the two went into hiding when their cover was blown. Sam, on the other hand, thought James wouldn’t easily give up on his wife and that he went to ground with his daughter because he was planning to make a move against Ortega himself.

Unfortunately, Sam’s theory was the one that panned out. He and the others got word about a shoot-out at a gang member’s home and they went to the scene where they found a bunch of gangbangers dead. They had all been shot by James. James broke into the compound looking for information on his wife and he tortured and killed several people before he was done. The worst part was that he took his daughter Amanda with him! The little girl was overheard on security cameras to look the other way and that she shouldn’t worry. Except he was killing someone five feet from her position and so he lost his priorities along the way. It wasn’t just about the abduction of his wife anymore. James also wanted revenge and the team knew they had to stop him from reaching Ortega.

Not only was it a big gamble on James’s part, but the odds of someone getting hurt was simply too high for anyone to be comfortable. They first wanted to know what happened to his daughter and so they searched for her until they found her in the car. She was left alone with a loaded weapon and her father had given her the orders to use the gun on anyone that tried to take her. The little girl was scared and paranoid because of her father. She needed to be coaxed into giving up her weapon and once she did it was after to go after her father. They found James with a gun pointed at Ortega and Ortega with a gun pointed at Christina. It was an impasse that only ended when Sam convinced James to let the agents deal with Ortega. There was no need for revenge with so many eyes watching him and even if he didn’t know it his family still needed him.

James thankfully chose his family when pushed, but the rest of what he did to get to such a position was kindly “forgotten” by Sam and Hamilton because neither of them wanted to see a good man go down.

They dealt with Ortega and they reunited Christina with her family.

And if Sam was a little hesitant to share the details of the favor he did for Hamilton then that was on him.