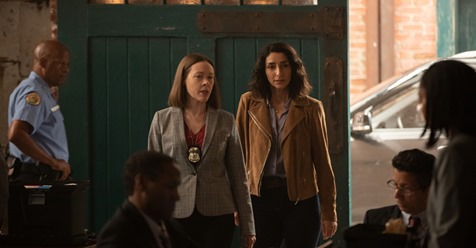 Tonight on CBS NCIS: New Orleans returns with an all-new Tuesday, May 14, 2019, season 5 episode 24 called, “The River Styx, Part 2,” and we have your NCIS: New Orleans recap below. On tonight’s NCIS: New Orleans episode as per the CBS synopsis, “The Season 5 finale: Pride is separated from the team and faces grave danger after tracking Apollyon, a deadly underground spy network, to war-torn South Ossetia. Also, in order to save Pride, the NCIS team must locate a mole who continues to feed information to Apollyon.”

LaSalle had to abandon a friend. He left behind Pride because he knew that Walker was just going to keep coming after him and so he went back to New Orleans. LaSalle returned with Agent Isler’s remains and unfortunately that brought oversight from Washington. Their superiors sent in a woman to get an update on what happened and in the meantime, Isler’s body was transferred to the morgue. Gregorio went with the body because she said someone should be with him, but her grief and LaSalle’s anger were all an act. The real reason Gregorio went with the body because she wanted to see who would photography him for proof of his death and while she didn’t catch the person that did it she does know that they are out there.

Walker has a mole inside of the investigation unit. It wasn’t NCIS because they knew they could trust their own and so it must have been the team that Agent Parker brought with her. Parker claimed to have been a part of another team that was investigated Walker and she said that right as they were making their move to arrest him – he killed her whole team. She said that’s why she wanted to get him. Walker was out there and Parker said that NCS couldn’t get him on their own much less rescue Pride without help but the team didn’t take her offer. They couldn’t trust her and the photo felt like evidence not to. The team closed ranks and later they went back to the morgue to collect Isler.

It turns out Isler wasn’t dead. He faked his death to flush out the mole and he was secretly working with NCIS to figure out where Walker was. They traced the photo of staged Isler to a burner cell and its signal. It was clearly going to Walker, but the signal kept bouncing around and Patton couldn’t get his hands on Walker’s location. Finding Walker was the key to finding Pride and so they tried a new method. They asked Isler what Walker could have wanted from Pride and Isler said that Pride has one of the last caches on Apollyon from Amelia Parson’s tattoo. Pride must have hidden somewhere and the team didn’t know where. They actually came to rely on Jimmy because he accidentally found out about Isler and Jimmy was great at figuring out Pride.

Pride left several letters to family and friends that were to be open in the event of his death. Jimmy found the letters and he read him because he knew Pride could have hidden clues in there. And he had been right. Pride asked Jimmy to go visit their brother’s grave every week as he does and Jimmy knew that Pride hasn’t been back to Cassius’s grave since they buried. It was just a clue. Jimmy took Khoury and Isler to the grave and they found the last file on Apollyon. No sooner did they discover this that Parker moved in and demanded the files. She said that Khoury broke protocol and that she wouldn’t tolerate side-investigations. Parker then took this file and left with her team.

Parker may have had others fooled but she didn’t trick Gregorio. Gregorio followed Parker with Sebastian and they even brought along Isler. Everyone believes Isler was dead and he got to be the team’s secret weapon. He couldn’t do anything to help Khoury and Jimmy, so he tried to help Gregorio when she talked Sebastian into breaking into Parker’s office. Parker had been trying to upload the Apollyon file to send to Walker and Gregorio barely managed to stop her. She fought Parker until she was able to subdue her and Sebastian stopped the file from being uploaded. He shot up the computer and that did the job. It also brought the security team in and so both Gregorio and Sebastian were going to be arrested when all of sudden Rita showed.

Rita was surprised to have gotten a phone call from a dead man. Only she didn’t let that stop her from getting the FBI involved and she found the evidence of Parker’s guilt. The woman still had the burner phone in her possession and she was being wired money from offshores account. She began accepting bribes before her team was killed and so she set that up as well. Parker cracked to the FBI and she gave up Walker. The reason Walker’s signal was bouncing so much was that he was on a flight. This information helped Patton because he finally narrowed down where Walker was and he realized the man was back stateside. He came from Eastern Europe and he traveled to Brownsville, Texas. It was a small town on the border.

No one could figure out why Walker would get there, but they hoped he brought Pride with and so they brought in backup to get to the site. They ran into some difficulties of course because Apollyon tried to fight back and so the team had to travel to a blood bath before they could get to Pride. Pride was tortured for information and it wasn’t the information everyone thought it was. He had been drugged to make him lenient and that’s the only reason why he revealed to Walker where Walker’s son is. It seems Walker put his only child up for adoption after the mother died because he didn’t want anyone to use the boy against him. His plans for the child all changed when he basically became top dog and was in a position to better to protect his son.

Walker made sure he never had the information on where the boy could have gone because he didn’t want to inadvertently expose his son’s location. He didn’t think anyone knew about the child until he saw the photo that Amelia showed him and so everything afterward was him trying to rectify it. He knew that Pride got Amelia’s cache and he tortured him to find out where the boy is. Walker left his men behind with Pride and so he wasn’t there when the team rescued their friend, but they knew where Walker was heading and cut him off. This time they had the shot and they didn’t hesitate to take it. They killed Walker before he could get to the boy and in doing so they finally put an end to Apollyon.