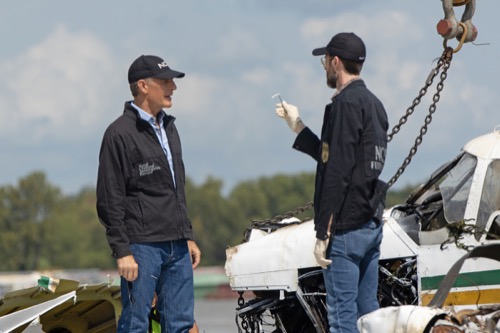 Tonight on CBS NCIS: New Orleans returns with an all-new Tuesday, September 24, 2019, season 6 episode 1 called, “Judgement Call,” and we have your NCIS: New Orleans recap below. On tonight’s NCIS: New Orleans episode as per the CBS synopsis, “ride must cut his vacation short when Hannah is suspended for breaking protocol during a joint investigation with the FBI, on the sixth season premiere of NCIS.”

Special Agent Pride received an accommodation. He went rogue several times in the past few months and he thought he was facing blowback from it, but really a panel was put together to honor him for his extensive work in taking down Apollyon. They even said that they wished there were more men like Pride. Pride hadn’t known what to expect from them so he was glad it was praise and that he wasn’t being fired. It was just unfortunate that no one will ever know about the accommodation. He was being put in his file as well as being redacted.

Pride did at least get to tell people about it. He told Rita and he even informed his mother. His mother didn’t remember it for long because of her disease though she had been happy when he mentioned it and it was also good to see her. Pride didn’t really get a chance to see her often. He was enjoying their visit when he got the call and was forced to come back home. Pride had to deal with his team’s mistake. It seem Agent Khoury had defied the FBI during a joint mission and they were now blaming her for a bomb going missing.

This joint mission was about a group called “Call to War”. They were an Aryan extremist group and they managed to get their hands on a naval bomb. They were going to sell it when the FBI located them. The FBI used thermal imaging and saw six bodies. Only there were more people inside the house. There was the two women and there was the mysterious buyer. The buyer was wearing something that would hide his body heat and so he stalked off with the bomb while the group was dealing with the FBI.

The bomb got away and the FBI were blaming Khoury because she broke protocol over the women. She acted when she saw two unarmed women. She didn’t think it was fair that they got wrapped up in all of this and she entered the building despite being warned not to. Khoury managed to secure the women on her own. She was spotted by one guy and that wasn’t enough to raise the alarm. The FBI truly had no cause to blame the failed mission on Khoury. She did her job and now she was being punished because of it.

Pride suspended Khoury. He had no choice in the matter. She was suspended and there was even going to be a review. Pride was probably going to speak up for her then. He just didn’t think they should fight the suspension in the meantime and, well, someone disagreed. Gregorio had an idea. Gregorio thought it was ego that made FBI Agent Harper report Khoury and so she was going to talk to her contacts within the organization to tell them what really happened. She thought her friends could come in handy with Khoury.

Khoury however wasn’t sure if she wanted to put up a fight. She initially wanted to locate the bomb herself and so this suspension cut her off. She couldn’t be in charge when the team found clues. They figured out it was the buyer that got the bomb and they found his car leaving the compound. There were tracking down the bomb when they heard there was an explosion at a chicken manure plant. Although they didn’t find any evidence of the nerve agent and therefore the specific bomb they were looking for was still out there.

Not that the explosion hadn’t helped them. They determined from that explosion that their bomber was sending a message and that he was doing it with a war medals. The medal found at the plant belonged to Marine Lance Corporal Angela Gaines. She was killed in action eight months ago and her medals went to her father Former Army Green Beret Holden Gaines. Gaines was thrown out of the military after several disciplinary problems. It seems he questioned the mission and had lost faith in it entirely when he had been kicked out.

Gaines has since become a conspiracy theorist. He even believed his daughter was killed because her platoon were set up and he’s so desperate to prove it that he turned to violence. He let off the bomb at the plant when he realized that NCIS was closing him. He therefore nothing holding back when it came to nerve agent bomb. NCIS couldn’t figure out why Gaines was holding onto that one so they investigated him. He’s go on about making a point and the team believed it meant he was going to the bomb on the military in revenge for what happened to his daughter.

They then learned that the most convenient target was one state away. There was a training exercise in Mississippi and everyone there was in danger. Pride left Khoury’s review to go to Mississippi and he brought Khoury with him. She was already in enough trouble as it is, but she wanted to see this mission through to end, so she went with Pride and there they interrogated everyone. They wanted to know who Angela’s Commanding Officer was. He was apparently at the training exercise and was most likely the chief target.

Gaines truly did want revenge for his daughter. He was a trained serviceman and he managed to evade several security measures around the exercise just to get close enough to their air supply. He wanted to kill everyone by releasing the nerve agent. Khoury found him with his hands on the trigger. She wanted to talk him down and the only way to do that was to get Gaines some answers. He wanted to know what happened to his daughter, so they brought the CO to him and had him declassify Angela’s mission just so that Gaines would finally get the answers he needed.

He thought his daughter had been set up and she hadn’t been. Her CO received vital information and they acted on it. Unfortunately, it didn’t end how any of them wanted it to. Angela and her platoon died because the information hadn’t panned out. And hearing that had been enough for her father to turn himself in.

He didn’t act on the bomb. He was talked down and Khoury deserved recognition in what she did and yet her review still didn’t go the way she planned. The Deputy Director of NCIS said she couldn’t be relied on. She made questionable decisions with this case and it goes beyond just her career in NCIS. The Deputy Director hadn’t trusted her because of her file. It was long and it gave the guy means to fire her. Pride tried to stop it.

Pride struck a deal in order to save Khoury’s career. Both Khoury and Pride were going to be demoted. Khoury would stay at her same pay grade and Pride was going to come back to lead the team. Khoury hadn’t been sure if she wanted to accept. She talked it out with her estranged husband and ultimately decided to take the demotion if it kept her in New Orleans with her family.

And Pride was happy because he hated the administration side of things, but Pride was also suffering from hallucinations and they were getting bad.