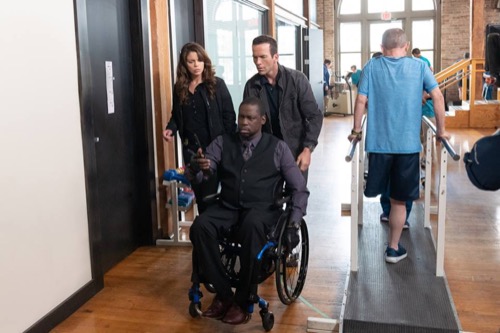 Tonight on CBS NCIS: New Orleans returns with an all-new Tuesday, April 2, 2019, season 5 episode 18 called, “In Plain Sight,” and we have your NCIS: New Orleans recap below. On tonight’s NCIS: New Orleans episode as per the CBS synopsis, “The NCIS team investigates the murder of Patton’s friend, a former Navy SEAL gunned down in a drive-by shooting while Patton watched.”

Patton witnessed a murder. The murder victim had been a friend of his and was meeting up because there was something they needed to discuss. Former Navy SEAL Nick Taylor had told Patton that he couldn’t tell him at their usual place. He asked Patton to meet him outside and that’s where Patton witnessed the drive-by. The car was speeding their way and Patton hadn’t wheeled over because he didn’t want to get hit. He just though the car was behaving erratically and he was going to wait out until the driver slows down in front of Nick. The driver or his passenger had gunned down his friend right in front of him. Patton ended up blaming himself for slowing down because he thought if he could have reached his friend then maybe he could have saved Nick.

Patton was so full of guilt that he demanded to work the case. The case had naturally gone to NCIS because even a former member of the Armed Force was still considering a member and so Pride signed off on it. He said that Patton had to be where he was needed and to be sure of his plan he also joined the task force to investigate this case. They wanted to know why Nick was killed. They dug through his life and they couldn’t find anything. He was dating his physical therapist which wasn’t an open secret, but it wasn’t a secret to kill over and so the team instead tried using ballistics to find Nick’s killer. He was shot three times and the bullet that went into his prosthetic leg was perfectly intact.

Patton and Sebastian were going to go over the leg when Sebastian noticed something. He noticed that his phone vibrated every time he came close to the leg and so they dismantled it where they found a microchip. Patton later ran it and he found several stolen files from the NAVY on the chip. It led to everyone questioning if Nick could have been a spy? They didn’t find anything in his background and the only thing that seemed off was that suddenly people knew how to get around the Coast Guard. The information that was found on the chip had clearly been sold off and everyone thought Nick was behind until Patton proved otherwise. Patton proved that the chip in Nick’s leg wasn’t the only one that was in operation.

There were several other chips taking in information. They were all traced back to the physical therapy gym where they met the Valor Brigade. The Valor Brigade was a group injured servicemen and police officers. They formed the group to pushing each other into recovery and seeing what they could for their community. It turns out that everyone in this group had had either their wheelchairs bugged or their prosthetics. This group was being used for information and the information was then being sold to a gang. So the real question was who was behind the sale? It wasn’t Nick because Patton said his friend would never do that and so he decided to check out the physical therapist, Juliette Flores.

Juliette could have lost her job if her relationship with Nick was ever discovered and unfortunately the secrecy meant she was also primed to be blackmailed. A burner cell has been calling and sending texts for weeks. The text messages even threatened physical danger if Juliette told anyone else what was happening and she must have broken that rule with Nick. Nick knew that Patton was a wiz with a computer and he probably wanted his friend’s help to find out who was blackmailing his girlfriend, but then he was killed and sadly Juliette was later found murdered as well. The blackmailers killed off everyone that could tie them to hack on several law enforcement departments and so Patton tried another way to find out who they were.

Patton went sifting through all the stolen information to determine which gang was responsible and he even had some help from the Valor Brigade. The Brigade’s leader Detective Kevin Simms had helped Patton realize that it was the Marauders behind everything. The Marauders were a motorcycle gang and they became a big name when they got a connection to Peru for cocaine. It seems an important member of this gang had gotten into a bad accident and was sent to physical therapy. Zander Reed must have been around long enough to learn about the Valor Brigade and realize he could take advantage of it because no one took the disabled seriously. Simms had wanted to prove that no one uses him without consequences and so he called upon his old contacts to find out where the Reed was going to be.

Simms also gave a bogus location to Pride and the team because he wanted to make a point by taking down Reed himself. But Patton suspected something was up and he followed Simms. He saw Simms confront Reed and he wheeled himself into the middle. Patton didn’t want his new friend to throw his life away because he wanted to prove he was still a capable cop. He was! Simms was also a good man and so Patton convinced him to put his gun down, but the rest of the team arrested Reed and the Marauders.

Patton could see that Simms needed the same support that he got from his own friends and so later he invited his cop buddy to wheelchair basketball because he knew that becoming active again was a way for Simms to make peace with losing his leg.