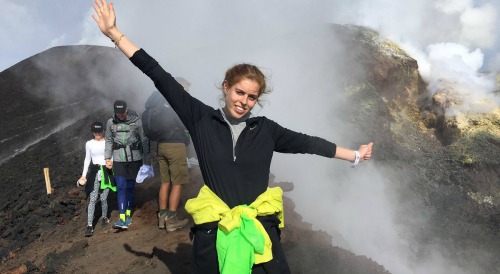 Princess Beatrice has finally found the love of her life, just like her sister, Princess Eugenie and her famous cousins, Prince William and Prince Harry. As a matter of fact, many eagle-eyed royal observers have noticed that Beatrice no longer looks like the ‘Bridget Jones’ of the royal family as she recently stepped out with her new boyfriend, Edoardo Mapelli Mozzi, for an event in London.

According to People Magazine, the new glamorous couple of the royal family made their debut at the National Portrait Gallery in London on Tuesday evening, March 12. They were joined by Prince William’s wife, Kate Middleton. The 30-year-old daughter of Prince Andrew and Sarah Ferguson wore a red velvet dress while her new boyfriend Edoardo wore a classic tux.

Just a few short months ago there was speculation that Princess Beatrice and Edoardo were dating, but insiders insisted that they were just getting to know each other. Fast forward two months later, however, and there is now talk that the two are looking to get married in the future.

Edoardo has long been a friend of the royal family. In fact, Beatrice’s mother Sarah even follows him on his Instagram account. He’s a 34-year-old multi-millionaire property tycoon who also has a son from a previous relationship.

So far Beatrice herself hasn’t made any comments about her relationship with Edoardo, although it’s safe to say that he doesn’t mind being in the public spotlight. After all, Princess Beatrice had a very high-profiled relationship with her ex, Dave Clark. The two split back in 2016.

Seeing how both Prince Harry and Meghan Markle along with Princess Eugenie and Jack Brooksbank had their royal weddings in 2018, there’s now speculation that Beatrice might be next. If she and Edoardo do get married in the near future, it will be a star-studded affair like the last two royal weddings. Sarah Ferguson was front and center while Beatrice’s sister Eugenie married her husband, Jack Brooksbank back in October.

In the meantime, check back with CDL for all the latest news on Princess Beatrice and the rest of the royal family right here.