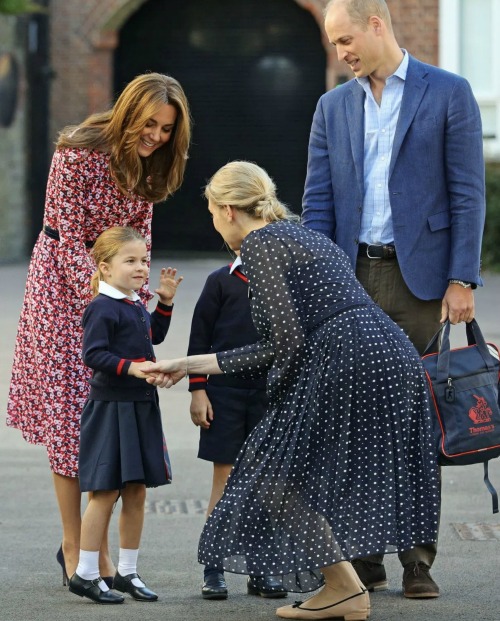 British royals news reveals that one radio host lived to regret his comments about Princess Charlotte and her teacher. BBC Radio 1 host Greg James spoke with The Mirror about an observation he made on the air. In September, Princess Charlotte joined her older brother, Prince George, at Thomas’s Battersea in London. That brought the chance for some cute first-day-of-school moments, which were shared by Kensington Palace on social media.

Prince William and Kate Middleton were naturally there to help Charlotte greet her teacher. At one point, Charlotte’s teacher leaned down to shake her hand and welcome Charlotte to the class. It was a sweet interaction, but this radio host thought it was a bit bizarre. “I saw the photo during the show and said, “Who the hell shakes hands with their teacher on the first day?’” James admitted.

Of course, we should point out that this was a special meet-and-greet event before school kicked off. Many people shake hands when they meet someone – especially if you’re trying to be warm and friendly with your new pupils. Princess Charlotte was sporting a smile, so she didn’t seem to think it was odd and clearly wasn’t uncomfortable.

Nevertheless, James mocked the handshaking and stirred up a little British royals news controversy in the process. In fact, James was confronted by Prince William and Kate a few weeks later. He eventually made a trip to Kensington Palace, where the royal couple asked to discuss his on-air comments. James had to make some updates to his original statement and clarify where he stood.

“They’d heard me saying this school was so posh they had to shake hands with their teacher every day,” James said. “They were not like that in my day. You were pleased if you got a smile.” James managed to smooth things over with Kate and Prince William, but he was undoubtedly worried about his blunder. It’s best to keep the royal children out of any on-air conversations – at least if you think Prince William and Kate might be listening!

In other British royals news, Prince George and Princess Charlotte appear to be thriving at Thomas’s Battersea. They seem like great kids with loving parents to cheer them on, so let’s hope the rest of the school year goes well for them. Stick with CDL for all the latest British royal news and updates.