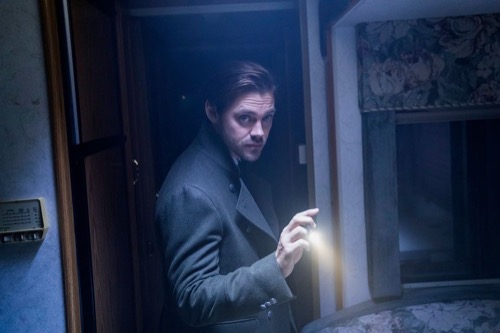 Tonight on FOX their new crime franchise Prodigal Son airs with an all-new Monday, November 11, 2019, episode and we have your Prodigal Son recap below.  On tonight’s Prodigal Son season 1 episode 8 called, “Family Friend,” as per the FOX synopsis, “As the NYPD digs into the “Junkyard Killer” case, Malcolm realizes the main suspect may have had a connection to his father.

As news regarding this serial killer spreads, Ainsley itches to be the first one on the case, while Jessica panics, fearing she may never be able to leave the past behind”

Malcolm breaks down the wall that his mother had built to block over the door to his father’s office. He busts through the sheetrock to answer his father’s old phone. Its an old friend of his dad’s who won’t disclose who he is. Malcolm chooses to call him Paul. He has called to tell Malcolm to stop interrupting his work. He knows he is a cop. His father must be disappointed.

Ainsley is watching a video of her father talking about his illness. She is in the hospital visiting her colleague who was knifed.

Back at Malcolm’s mother’s home, Gil and the team has come over to look at the walled-off room and assess who may have called. Jessica is on edge, drinking scotch. Gil offers her protection but she turns it down.

Back at the station, Malcolm thinks they have a mission-oriented killer on their hands. Edrisa talks about two victims she has who had nothing in their stomachs. Maybe the killer held them for days without food and water?

They head back to where Paul once shot at Malcolm. They dig around. Malcolm finds metal under the rocks in the dirt. He starts to dig and finds a door that leads to a trailer in the ground. Gil tells him to hold off until help comes but Malcolm jumps down through the opening. He looks around and finds a male victim chained. Malcolm tells him he is safe now after ripping the duct tape off of his mouth. The man tells him no-one can keep him safe.

At the station, Malcolm talks to Gil and Dani about the victim Ryan who was facing a mirror when he finds him. Paul wants them to reflect on their sins it seems.

A friend of Jessica’s shows up to find her a mess. Jessica explains what happened the night before. Martin seems to keep ruining most of her days.

Malcolm and Dani visit a church where Ryan stayed at the shelter. Two other female victims also stayed at the same shelter. They talk to the father who is devastated to hear the news about all three’s possible murders.

Ainsley won’t stop texting Malcolm to get news tips. Gil tells him to shut her down. They get back to the case. A courier has sent a box to the office and it looks like it is leaking blood. Edrisa opens the box to find a hand. Malcolm recognizes it like the hand of the father. The phone rings. It’s a phone hooked up to Jessica’s phone line. Malcolm answers. It’s Paul.

He is mad that Malcolm found Ryan. He gets revenge on Malcolm by mentioning the girl in the box, the one he saw when he was a kid. Malcolm starts to shake and get upset. He knew it was real, it wants a dream. Gil tries to comfort him outside where Malcolm has run to for air. Malcolm tells him he will be back soon. He spots a man in a hoodie on the street. When Malcolm looks at him he starts to move on, walking in the opposite direction. Malcolm chases after him, following him through a door into an underground hall to the trains. He threatens Malcolm, pinning him in a turnstile. Before he leaves he gives Malcolm a phone. He will call about the girl later with instructions.

Back at the station, Malcolm holds his ribs while Gil yells at him for not calling for back up. Malcolm needs to go tonight to catch Paul. Gil doesn’t like the idea but agrees. Meanwhile, Ainsley knows about Paul being at large and leaves the hospital to invent the case.

Malcolm gets a message from Paul to meet in 2 hours. His door buzzes, it’s his mother’s friend. She has stopped by to tell him Jessica is not doing well – she is drunk in the middle of the day and waving a gun around. Malcolm plans to look into it but tells her he needs to run first.

Gil and the team accompany Malcolm on his mission to capture Paul. Malcolm takes off on foot and gets a call from Paul. He finds a bag with a bracelet in it that belongs to the girl in the box. He continues to walk and finds the father, injured and bleeding. Paul tells him he is headed to finish another mission. Malcolm calls Gil. Paul is mad, Malcolm didn’t follow the instructions. Malcolm thinks about what Paul really wanted and that’s Ryan who is the hospital, the same one Ainsley is at. Malcolm calls to warn her. She doesn’t listen and looks around, finding Ryan and his guard dead. She runs while on the phone with Malcolm. She locks herself in a room. Pail tries to get in. The police arrive.

Back at her colleague’s room. She is confronted with filming his surgery. He cannot believe she would do this.

Gil and Malcolm talk about what happened. Malcolm is upset because of Paul getaway. He is always 2 steps ahead on his divine mission. He hands Gil the bracelet. Gil tells him they will find her.

Ainsley reports the news about Paul being at large. Malcolm visits Jessica to see if she is all right. He tells her the police have been outside standing guard to protect her. He didn’t tell her because she would have sent them away. She won’t stay at a hotel, her family has been living there for decades. She just wants a normal life. Gil calls – the Feds have taken Paul’s case over.