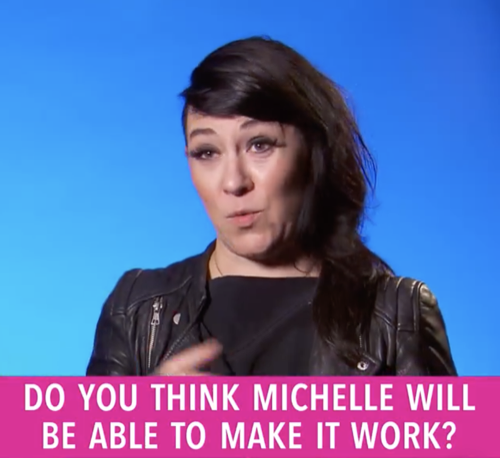 The designers got a little taste of Broadway when they were taken to the set of a new musical called  “Charlie and the Chocolate Factory”.

Everyone knows the true star of the story was Willy Wonka. He was an innovative creator and had done wonderful things with chocolate. The challenge for the designers was to see if they could be just as creative. They were asked to create a never-seen-before look and to be as innovative as possible. This challenge was therefore called the Avant-Garde Challenge. The avant-garde part was something each of the designers could understand and have a little fun with but they were lost whenever they thought about the innovation going into the piece. There were people like Anthony that thought the challenge meant creating something that no one had ever thought of and so he thought of an easy-board jacket where anyone could include their own message on it.

There was also some like Michelle who considered taking a unique spin on a classic. Her son is autistic and he’s helped her to understand how he may see the world. Therefore, she considered doing a look with a skirt that was in a sphere shape and then she went from that idea of doing something else with her son in mind. Like a  sensory deprivation jacket! She thought it was something someone could wear to turn off the world if they needed it and so her jacket had been a hit with Anne. Anne enjoyed a lot of things she saw. She liked what Anthony was doing and she enjoyed the idea of Christina creating a radio dress with speakers in the side panels. And always she had something to say to Django about his look.

Django told her that he was creating an apron that could be versatile and Anne shot it down because an apron wasn’t something she thought she could be on All-Stars. She thought it was too kitcheny and she didn’t see an innovative take to it at all. Anne was basically repeating what everyone in the room was thinking and so Django snapped the moment Anne wasn’t looking. She had left the design room and all of sudden Django was tearing into the other designers. He made fun of Anthony and he snapped at Christina when she had been nice to him. Django found a fault in everyone’s look because he said designers shouldn’t be innovators, but then he must have realized he would have failed the challenge because he tossed aside the apron idea and came up with a hat.

Now, the hat had been much better! It was a huge step up from the apron and it gave off a Southern Belle feel that Django did play into. He back on firmer footer with his hat and he knew it. It made his comments about the others even bitchier. Django was someone that didn’t like Irina’s dress because he thought she had exaggerated the pockets, he didn’t like Christina’s look because the speakers on the hips weren’t done right (according to him), and well everybody thought Sean was running the risk of going home. He threw out a dress he worked hard on and had to create something on the day of which also happened to be his birthday. And so what way to celebrate a birthday, creating a second dress even uglier than the first one.

It soon came time for the models to go on the runway. The designers had all been proud of what they created and it was the getting judged part that was hard to deal with. The judges loved Christina’s look because they said her jumpsuit was something they would love to wear and they also loved Anthony’s look. The huge jacket was a good sort of weird and everyone enjoyed the idea of it. They also enjoyed Michelle’s look because they loved the fabric more than anything else and once they heard the story they fell in love with that idea. And so the ones that struck out in a bad way were Irina’s, Django’s, and Sean’s look because the judges thought they focused too much on one thing.

They either chose to be innovative or too avant-garde. Sean’s dress was a hot mess, Django’s hat looked like a ripoff of Chanel, and Irina’s dress was basically a drape. Irina’s dress was wings on a short mini-dress and no one quite enjoyed it until the dress was fanned out. So there were a lot of things for the judges to consider. They ultimately came to decide about the winner. The winner of this challenge was Anthony Ryan.

But the bottom two were Sean and Django. They both failed to grasp the true lesson of this challenge and the judges had frankly gotten tired of not getting the best out of Django. Django was eliminated on this season of All-Stars.