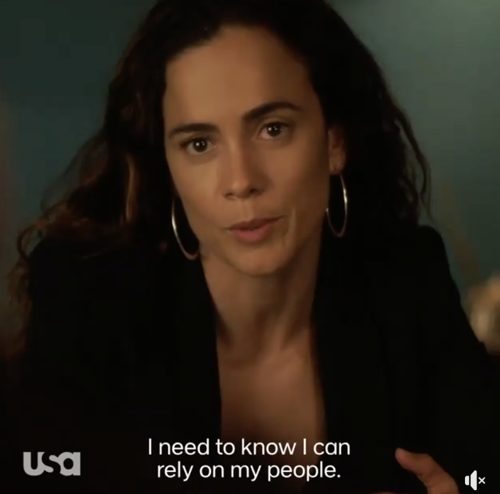 Pote returned to New Orleans with Tony, but he also brought the unwelcomed guest Kelly Anne with him and the last Teresa knew she thought James killed Kelly Anne.

And yet. Kelly Anne is alive and she’s returned to face judgement. She could have run when she had the chance and she didn’t take it. She instead came back with Tony because she was tired of running. Kelly Anne didn’t want to live without roots anymore. She wanted the chance to either live her life or die. She even told Pote as much. Its why he brought her back to New Orleans and why he explained her actions for when Teresa did show up. Teresa went there hoping to see Tony and she was glad to see for herself that he was alright, but then she saw Kelly Anne and Pote had to talk fast. He told her what happened and that one got away in the shoot-out. He also said that Kelly Anne risked her life for Tony and that has to count for something.

Teresa gave him the option of hearing him. It what the least she could so and frankly she didn’t know what to do about the situation. Therefore, she asked for time. She needed time to think and clear her head. Teresa clearly remembers that Kelly betrayed them once and so that made her hesitate to trust the woman again though Kelly Anne saved Tony’s life and so she couldn’t kill the woman for having done that. Teresa also asked for time because she was on the brink of opening the club. She needed it to succeed to wash her money and she was buying into legitimate business on top of that. Teresa was in the middle of purchasing a trucking company and she thought everything was going smoothly until the owners threw in a last-minute reveal.

Frank and Abby Salerno had some business troubles in the past and so they went to a loan shark. It was just supposed to be a quick loan. Then the guy raised his interests overnight and eventually claimed to have a thirty percent stake in the company. Joel Boucher calls himself a partner and he will want to remain a partner even as the company is sold to Teresa. This could have the deal right then and there and for some reason it didn’t. Teresa still wanted the company and so she reached out to Boucher. She invited him to her club and they got to talk alone in the back area. Teresa thought if she offered Joel enough money that would be it and far from it. The man spat on the money because as he puts it he’s well-connected.

Boucher has friends in high places within New Orleans. He knew he could do whatever he liked and no one could do a thing about it. He also didn’t want to work with “no Mexicans”. Boucher left the club and went directly to the Salernos. Frank was beaten up and a truck was torched, but it got Boucher what he wanted because the couple called Teresa afterwards. They said the deal was off. They weren’t going to sell the company to her and so Teresa tried to fix things. She left her club along with Pote because she was going to try and talk to the couple. And no sooner was she out the door that a bunch of hillbillies took her hostage. Teresa and Pote were being transferred in the back of a truck with even more hillbillies stopped by her club.

The hillbillies that kidnapped Teresa were with Boucher. He wanted to talk to Teresa alone and so he as well as his people made the mistake of leaving Pote in the van. Pote was angry and they cut him off from his Teresita. So of course he was going to break out. Pote broke his chains and he killed the man watching him. Pote then stole the car and picked up Teresa. She was being threatened over the shipping company and so his help came at the right time. The pair of them got out of there with no problem and then they ran into the same hillbillies at the club. They ran into LaFayette. He found out what Boucher was doing and he put an end to it. He killed the man and then demanded the payment that would have gone to Boucher for himself. The judge called it both a tax and a lesson. He said New Orleans was his own and that nothing happened that he didn’t know about.

LaFayette’s nephew meanwhile was at the club and making a nuisance of himself. Neither he nor his friend were willing to pay for their drinks and they said the bar had to serve them until they were ready to leave. So the whole family was a nuisance. Teresa came to an agreement with the judge, but she wondered how he knew about her possible smuggling business and so Teresa told Pote that they needed to find his weakness. They thought they would need to search for it and it turns out it was an open secret in New Orleans. The judge has a son with an anxiety disorder and Teresa just has to exploit it. She also needed to deal with Dumas because she suspected he was the leak and she brought in an end to their arrangement.

Back at the club, Javier finally lost his patience and he beat up the nephew because the little brat was a jackass. He then got carried away and odds are he killed him with Boaz as they were egging each other on.