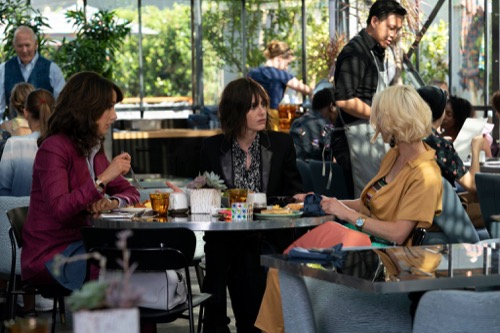 Tonight on Showtime Emmy Award-winning drama Ray Donovan airs with an all-new Sunday, December 8, 2019, episode and we have your Ray Donovan recap down below.  On tonight’s Ray Donovan season 7 episode 4 called,  “Hispes,” as per the Showtime synopsis, “Mayor Feratti ups the ante in his negotiations with the Sullivans and Ray must step in to finish the deal; Bridget and Smitty are called in to fix Jonathan Walker Hanson’s unsavory publicity scandal.”

Tonight’s Ray Donovan season 6 episode 11 is going to be exciting.  So be sure to bookmark this spot and come back from 8 PM – 9 PM ET for our Ray Donovan recap.  While you wait for our recap make sure to head over and check out all our Ray Donovan news, recap, spoilers & more!

Bunchy is at the hospital when he sees the mother of the teen boy he shot during the robbery at the convenience store. He tries to be nice to her but she lashes out. He begins to cry as security takes her away. The security guard at the hospital comforts Bunchy. He gives him a card to a support group where he can go to talk to others.

It’s night, Ray is in his office. The police come running in and cuff him while they look for evidence. Meanwhile, Terry is with the mystery woman who is trying to relieve his pain naturally. After meeting with others in his group he goes inside to find the mystery woman completely naked. She tells him to join her. He begins to undress.

Bridget sneaks into the house. Smitty wakes and begins kissing her. She pushes him away, telling him she smells from work. Meanwhile, Terry leaves the woman’s bedroom disappointed after not being able to perform sexually.

Smitty visits Ray in his office to ask him about marriage and the honeymoon phase. Ray’s client calls. The police went through all of her things but they didn’t get the memory card.

Mickey walks the beach while Darylll lay in bed with his new love interest. His mother comes in to yell at him. Mickey makes his way off the shore to a beach party where he grabs a drink.

Ray pays his new political boss a visit. He rips the phone off of his desk, ending a call. Ray is angry that his car and apartment were tossed by the police. Later, he gets a call that Jonathan has herpes and it is all over the news. Bridget also gets a call about Jonathan. She gets Smitty and a blonde wig to go see him. She arrives to see Jonathan and tells him she has a plan. He and Smitty are going to change places. Bridget’s plan works.

Mickey calls Sandy to tell her about Rose Beach and how travelers wire money to stay in houses there. Sandy plans to visit so the two can swindle people out of money.

Terry walks to the side of a lake after meeting with the shaman. He feels hopeless. An older woman who he has seen a few times at a group comes by to talk to him. She tells him she has tried everything for her cancer.

Ray comes to see Bridget who has Jonathan. He is impressed by Bridget’s plan and the fact that she told Jonathan to issue a statement in order to get in front of the bad press. But he doesn’t tell her so.

Allan calls Darylll to give his condolences on Mickey and to offer him a job as a creative executive. Sandy arrives at the bank to help Ray. She empties a safe deposit box for him belonging to Sully, collecting a stack of treasury bills and gives them quickly to Ray before she is taken in for questioning. Sandy acts crazy as they take her in. Ray leaves fast. Sandy meets up with Mickey and shows him a gold coin from the safe deposit box.

Daryll pays Bunchy a visit at work. He doesn’t know what to do. Should he take the job with Allen? Bunchy tells him he doesn’t know why he wants to be a Donovan. Bunchy hits his first meeting for white nationalists.

As Daryll and his mom wait outside for her ride, Mickey arrives. Claudette is annoyed. He shows her the coin and it explains that it is a sign. She doesn’t care. She wants Daryll to stay out of his troubles. Mickey takes Daryll with him anyways. Claudette calls Perry, the detective, to report news on Mickey.

Ray stays and has a drink with Molly. She tells him she likes him. He tells her how he is in therapy. He kisses her.