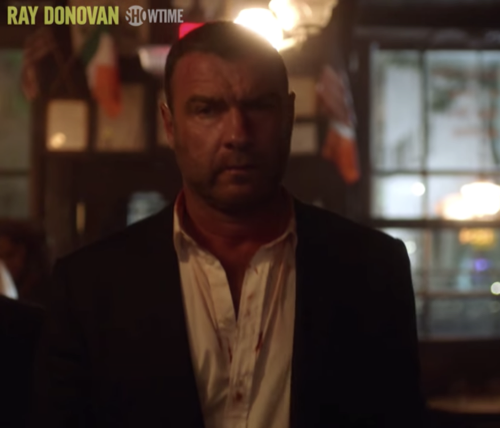 Tonight on Showtime Emmy Award-winning drama Ray Donovan airs with an all-new Sunday, December 29, 2019, episode and we have your Ray Donovan recap down below.  On tonight’s Ray Donovan season 7 episode 7 called,  “The Transfer Agent,” as per the Showtime synopsis, “Mickey finally learns the truth about the botched heist, and he’s out to get his fair share of the money. Ray reflects on his early memories of Jim Sullivan while he and Molly track down Sandy and Mickey by any means necessary. Smitty is questioned by the police and confronted with the consequences of his actions.”

Tonight’s Ray Donovan season 7 episode 7 is going to be exciting.  So be sure to bookmark this spot and come back from 10 PM – 11 PM ET for our Ray Donovan recap.  While you wait for our recap make sure to head over and check out all our Ray Donovan news, recap, spoilers & more!

Back to when Ray was a young boy, his mother calls him to her room and tells him it hurts, asks him to hold her. Mickey arrives home, he is drinking one beer after the other. He looks in the Folgers can and takes money out of it. Ray walks in and asks him what he is doing. Mickey says he needs it for an investment and not to worry about it. He kisses Ray on the head, tells him not to be so serious and goes back to bed.

Mickey heads to the bar, meets Jimmy who tells him to buy a bear for him, Mark and Arty too. Mickey gets the beers, Jimmy tells Mark and Arty to leave. Mickey slides some money over to Jimmy, who says it isn’t enough. Jimmy tells him to give him the money that he gets from selling coke to the girls. Mickey pulls out more money. Jimmy then asks for his gun, and if he doesn’t give it up, Mark and Arty are going to go to his house and break a couple of his ribs.

Ray tucks his mother in bed and leaves her room. He goes into the kitchen and removes one of the knives.
Present-day, Ray is on the ground and bloody – a man wakes him up. Mickey calls Jimmy and tells him that he is an old friend and thinks he should buy some tapes.

Ray is looking for Jimmy, who gets out of his car at McSorley’s and tells his driver to go home. Jimmy goes into the bar, then heads out the back door when all of a sudden, a black bag is put over his head.

Going back to Jimmy being at the bar after giving his money to Jimmy, when he is planning the heist. Mickey arrives home to baby Daryll and Claudia, he tells them that they are going to be rich. Meanwhile, Mickey doesn’t know that Jimmy is setting him up.

Back to the present day, the hood is taken off Jimmy’s face, Mickey is there.

Time for the heist, Jimmy’s men and Mickey take over a Fort Security truck, the police arrive within minutes and Mickey is taken down.

Jimmy is sitting across from Mickey, Sandy walks in, Daryll is there as well. Jimmy starts slinging insults and Mickey says he always had a knack for saying the nastiest things. Mickey says he is dead, he is not the same man, it all started when he set him up for the heist. When he returned home, his poor wife was dead, his daughter jumped to her death and his son hated him. What is left is hardened.

Ray heads out to the back of the bar, he finds Jimmy’s cell phone, Molly is there too and asks if his father killed all those people, he says he thinks so. She wants to call the police, but he says she can’t, it’s not what she thinks. If she calls the police, her father will be dead by morning.

Smitty is questioned by the police.

Mickey tells Jimmy that he has to make it right, he doesn’t know the man he would be if he hadn’t set him up. Mickey asks Jimmy why he did it. Jimmy says that he stole from him and got exactly what was coming from him, but he will give him a million dollars in cash tonight. Mickey tries to turn it down and Daryll is shocked. Jimmy asks Mickey for his number so he can get this over with. Mickey says he wants half of everything. Jimmy calls him a righteous piece of crap. Mickey tells Daryll to go wait in the car.

Jimmy calls his transfer agent. Mickey tells him to put it in Terry’s name, his eldest, Daryll can’t believe it.

Ray is on the phone with Sandy, he wants to know where Mickey is. Sandy tells him that he doesn’t scare her, she hangs up the phone with him. Ray asks Claudia where can he find her father’s transfer agent.

Terry calls Ray, tells him that Smitty got picked up by the cops, he is home now.

The transfer agent is on his way to meet Jimmy, Claudia and Ray are outside. Claudia gets out of the car, says she knows him her whole life and can talk to him. Claudia tries to speak to him but he won’t tell her anything. The transfer agent’s men try to take Claudia, but Ray stops it. One man is left behind with Ray who is about to kill him when Terry arrives.

Ray arrives at Claudia’s house, Bunchy is there and tells him she is not there. Ray goes into her apartment and pours gasoline everywhere. He lights a match and sets the place on fire. The fire department calls Sandy and tells her there has been an incident at her house.

Daryll is outside waiting for Mickey when he sees the transfer agent arrive. Daryll takes the briefcase and goes into the subway. Jimmy tells Mickey his boy got the papers. Mickey starts to cry.

Sandy is in her apartment, the whole apartment didn’t go up in flames but a lot of her possessions did. Ray walks in, she slaps him. Ray asks where Mickey is, she tells him that Mickey was doing this for him and his brothers, he wanted to leave them a legacy.

The next morning, Mickey calls Daryll, who doesn’t answer the phone. Mickey still has Jimmy tied up. Mickey turns around to Jimmy and asks him what he did. Ray walks in and pulls a gun on Mickey who has his gun pulled on Jimmy. Mickey tells Ray to get away from the door or he will kill Jimmy. Mickey says he is going to make it right before he goes, Ray is going to believe in him again. Mickey runs out the door and leaves Ray with Jimmy.

Back to when Ray was a kid, Mickey walks in the door and announces that he is back. Ray is cooking.

Jimmy tells Ray that he should have killed Mickey the day he walked into the bar with that knife. Ray cuts Jimmy loose. Jimmy thanks Ray, and asks him if he still has it in him to kill Mickey now.