The Young and the Restless Spoilers: Friday, July 26 – Rey and Sharon Breakup Over Adam – Phyllis Mulls Over Proposal

BY Heather Hughes on July 25, 2019 | Comments: one comment
Related : Soap Opera, Spoiler, Television, The Young and the Restless 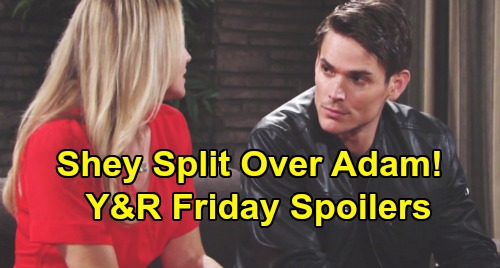 The Young and the Restless (Y&R) spoilers for Friday, July 26, tease that Rey Rosales (Jordi Vilasuso) will demand answers from Sharon Newman (Sharon Case). He’s warned Sharon time and time again about Adam Newman’s (Mark Grossman) manipulation. Sharon has also assured Rey that Adam wouldn’t come between them again. Sadly, that’s not going to be the case for much longer.

Sharon is drifting back in Adam’s direction, so Rey will object once again. He’ll wonder what kind of sick hold Adam has on Sharon. Rey thought Sharon had opened her eyes to Adam’s dirty tactics, so he’ll try to figure out what changed.

Sharon may argue that she agreed to help Adam for Christian Newman’s sake. Even though Victoria Newman (Amelia Heinle) ends up getting custody on Thursday, Sharon was willing to step up if need be. She may mention her recent conversation with Chelsea Newman (Melissa Claire Egan) and argue that she doesn’t think Adam’s a lost cause. Sharon may suggest she’s the only person who cares enough to get through to Adam.

Y&R spoilers say Rey will think Adam’s beyond help. Furthermore, he’ll be tired of all Sharon’s excuses and this twisted “Shadam” bond that’s staring him in the face. Rey was burned too many times by Mia Rosales (Noemi Gonzalez) to deal with all this, so their relationship will be hanging by a thread.

Within the next few episodes, “Shey” will be headed for Splitsville! We can understand Rey’s concerns, especially due to his history with Mia. However, we don’t blame Sharon for wanting to see the good in Adam. Someone has to! Perhaps Adam and Sharon will explore their lingering feelings for each other at some point.

Until then, Victor Newman (Eric Braeden) will have some unresolved issues to take care of. There’ll be some business he needs to address, so Victor will work fast. Will this involve Christian and all the custody drama? Victor might berate Adam and try to help Nick appeal the judge’s ruling. He’ll certainly do whatever he can to make sure his grandson stays safe and happy.

Other Young and the Restless spoilers say Phyllis Summers (Michelle Stafford) will mull over an interesting proposition. Will this be related to the new hotel and Theo Vanderway’s (Tyler Johnson) involvement? Could it relate to Adam instead? Michael Baldwin (Christian LeBlanc) might reach out to Phyllis and propose a mutually beneficial deal.

After all, Phyllis has implied she has a few tricks up her sleeve when it comes to Adam. Michael could use some of those tricks right about now! Regardless, The Young and the Restless spoilers say some fun scenes are looming. We’ll give you updates as other Y&R news comes in. Stick with the CBS soap and don’t forget to check CDL often for the latest Young and the Restless spoilers, updates and news.