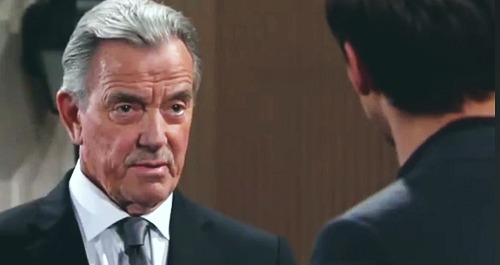 The Young and the Restless (Y&R) spoilers reveal that the custody case outcome won’t go over well with Victor Newman (Eric Braeden). He demanded that Adam Newman (Mark Grossman) stop pursuing Christian Newman, but his most sinister son refused. Will Adam pay the price now that Christian’s facing more upheaval?

The poor kid will have to spend three long months away from Nick Newman (Joshua Morrow), the man he knows as his father. Christian has already been bounced around from home to home with plenty of people walking in and out of his life. He started off as “Sully” when Sharon Newman (Sharon Case) and Dylan McAvoy (Steve Burton) were raising him.

After Nick took him back, Christian eventually bonded with Chelsea Newman (Melissa Claire Egan) and Connor Newman (Gunner and Ryder Gadbois). Later, Nick reunited with Sharon, so Christian bonded with her again. Phyllis (then Gina Tognoni, now Michelle Stafford) moved in with Nick after the “Shick” split and claims to have grown close to the boy, which must’ve been happening offscreen.

Christian Newman Ripped Away From Only Father He’s Known

Now the one constant for Christian – Nick, his dad in every way that counts – is being ripped away from him. Of course, Nick was responsible for a lot of the previously mentioned upheaval, so we’re not giving him a pass for that. However, Adam’s to blame for the current setback, and that’s what’ll matter to Victor. How far will Victor go to make this right – and at what cost to his declining health?

The Young and the Restless spoilers say Victor will take a massive risk during the week of July 29-August 2. Christian will inevitably struggle to adjust to life without Nick.

He’ll have to move out of his home and sleep in another bed at his aunt Victoria Newman’s (Amelia Heinle) home, so he may have some meltdowns. That’s the kind of thing that could prompt Victor’s gamble. He might get desperate and call in some favors.

Will Victor Newman Manage To Get Case Revisited Sooner?

Victor’s a powerful man who might get the case revisited sooner. He might even bring some dirt in the picture that calls the judge’s ruling into question. Even if Victor can’t fix anything before now and three months from now, it’s never too early to prepare for the next round of this battle. Victor can’t mess around when it comes to what’s best for Christian – and he believes the boy belongs with Nick.

This could easily lead to some heated confrontations, which aren’t a great idea right now. Victor is growing weaker and more confused thanks to his treatment. That’s on top of the illness itself, so Y&R fans know Victor’s dealing with a lot. Is all this building to a shocking episode and a trip to the hospital? Victor’s fierce feud with Adam may land him there even sooner than expected.