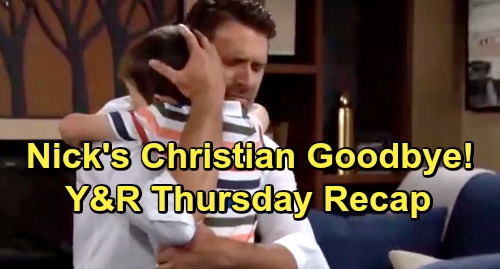 The Young and the Restless (Y&R) spoilers recap for Thursday, July 25, tease that Billy Abbott (Jason Thompson) will remain haunted by his loss. He’ll research ghosts online at Crimson Lights before Kevin Fisher (Greg Rikaart) appears. Kevin will admit he saw visions of Delia Abbott (Sophie Pollono) a lot after she died. Billy thought he’d moved on, but his own grief’s hitting him hard again.

Nick won’t be happy about that, but Adam will be pleased that the judge’s acknowledging his place in the boy’s life. Since Adam altered the paternity test and tried to distance himself from Christian initially, the judge won’t want him to get the wrong idea. He’ll insist Adam shouldn’t take his ruling as an endorsement.

At Nick’s place, he’ll fret over the situation and get encouragement from Victoria. Chelsea will hate that she had the power to stop this and didn’t come through for Nick. However, Nick won’t blame her for passing on Adam’s test. Victoria will agree that there was no need for Chelsea to demean herself like that. Besides, they wouldn’t want Connor Newman to get confused about where Chelsea stands.

Victoria will keep leaving voicemails for Billy, but she’ll assure Nick that he’ll want to help when he gets updates. Soon after, it’ll be time for Christian to say goodbye for now. Nick will tell the boy that he’ll be staying at Aunt Victoria’s house for a while. Once Christian exits with Victoria, Chelsea will comfort Nick as he breaks down in tears.

Meanwhile, Adam will grumble to Sharon Newman (Sharon Case) about not getting the outcome he wanted. Sharon will push Adam to play by the rules and prove himself worthy of parenting Christian. She’ll worry that Adam’s plotting something, but he’ll insist he isn’t.

Nevertheless, Adam will be irritated over all the hurdles and confusion for Christian. Sharon will feel like Adam’s anger is concerning, but he’ll think he’s got a grip on it. He’ll vow to get in touch if he needs Sharon’s help. Once Sharon leaves, Adam will drink alone in his penthouse and gaze at Christian’s photo. He’ll struggle to steady his hand as he processes the day’s events.

Back with Sharon, she’ll find Billy at Society and mention the custody case outcome. Sharon will note that Victoria can explain the details. Talk will turn to Billy’s rage toward Adam and how he fantasized about getting rid of him. He’ll tell Sharon about the gun, but he’ll promise he wouldn’t do anything to jeopardize his family’s future.

Sharon will har about Billy’s dreams and the signs he’s seeing. He’ll feel like Delia’s trying to tell him something and it’s stirring up anxiety. Y&R spoilers say Sharon will urge Billy to make an appointment with a therapist, but she’ll support him until he finds one. At the cemetery later, Billy will let Delia know he’s not going to lose control again. He’ll hear Delia’s voice saying, “Poor Daddy.”

Other Young and the Restless spoilers say Abby Newman (Melissa Ordway) will have some big reasons to celebrate. At Devon Hamilton’s (Bryton James) penthouse, Abby and Nate Hastings (Sean Dominic) will be thrilled over Elena Dawson’s (Brytni Sarpy) decision to officially live with Devon. Abby will also bring Devon up to speed up her partnership with the Grand Phoenix hotel.

Next, Ana Hamilton (Loren Lott) will arrive and admit Jett Slade’s (Gilbert Glenn Brown) be hospitalized. Devon will offer the jet so they can be there with Jett to hear his test results. Nate will remain in Genoa City with Abby, and they’ll head back to his place. The Young and the Restless spoilers say things will take a passionate turn, so they’ll make love on the bed.

At the Chancellor mansion, Kevin and Michael Baldwin (Christian LeBlanc) will bicker about Adam. Michael will fret about what Adam might demand next, but Kevin will think there’s a way to get Adam out of the way. He’ll assure his brother that he doesn’t mean killing Adam, but Michael will think Kevin has a golden opportunity. Adam’s distracted with the custody drama, so Kevin could just disappear.

Michael will push Kevin to get out of town while he can and go be with his family. Kevin will resist, but Michael will ultimately wear him down on the idea. The Young and the Restless spoilers say Kevin will plan to pack his bags. He’ll express his love and gratitude to Michael before he goes.

It sounds like some great scenes are on the way. We’ll keep you posted as other Y&R news comes in. Stay tuned to the CBS soap and don’t forget to check CDL often for the latest Young and the Restless spoilers, updates and news.