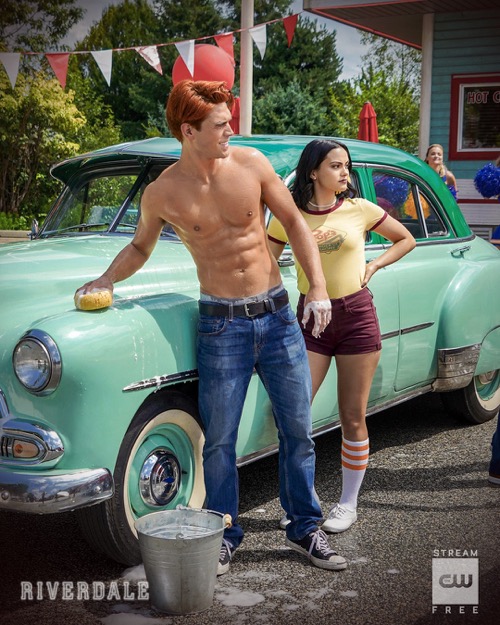 Tonight on CW their drama Riverdale airs with an all-new Wednesday, October 23, 2019, season 4 episode 3 called, “Chapter Sixty: Dog Day Afternoon,” and we have your Riverdale recap below. On tonight’s Riverdale season 4 episode 3 as per the CW synopsis, “Things take a dangerous turn when Betty and Charles track down Edgar and his Farmies.

Jughead went to Stonewall Prep. It was much harder on Betty than it was on him. She was depressed at first because she knew she was going to miss him and then Jughead reassured her. He told her that they were in it for the long game. They both believed that they were going to be together forever. Neither of them even consider the idea that they might break up again and so their beliefs allowed them to leave each other for now.

Especially as they thought it was just going to be for now. Jughead had a bright future ahead of him and Stonewall Prep was going to do wonders for him. He’ll receive a much better education there than he would at Riverdale High. He also wasn’t going to be alone. He actually had Moose with him even if Moose wasn’t going by that nickname anymore. He was now using his real name Marmaduke and it helped him fit in.

Moose, or Marmaduke as he is now, had struggled last year. His father was arrested after impersonating the Gargoyle King and Marmaduke hadn’t taken it well. He needed to be hospitalized for a while because he couldn’t envision a future for himself after everything his father did. Yet, that was all different now. He was Stonewall and he finally had his fresh start. Jughead wasn’t going to ruin that for him and so Marmaduke tried to tell what like will be like at Stonewall.

Betty meanwhile returned to her new normal. She and Veronica put together a car wash to help Archie raise enough money to turn that old gym into a community center and everything was going fine until Betty received a call from Edgar. Edgar had made that call on her mother’s cell phone. He got it off of her once he realized there was a spy at the commune and rooted them out by torturing everyone until the guilty party came forward.

Edgar was now holding Betty’s mother hostage because he wanted something from Betty. He demanded that Betty get him passports for him as well as his Farmies and he wanted cash. Edgar was so serious about what he wanted that he decided to preempt the authorities. He released a hostage and had their person go directly to Charles and Betty. That person was Polly. Polly came in wearing a strapped-on bomb and there was no telling what she could do.

The bomb was a dead man switch. Polly was holding the trigger and yet she didn’t necessarily have control of the bomb. The bomb was also on a timer. It was counting down and could potentially kill everyone in the room. Charles told Betty how the bomb could be stopped and she had to be the one to stop it because she was the only one that Polly trusted enough to let near her. Polly let Betty get close. She let her sister cut wires she wasn’t sure about and she let her sister put her own hairpin into the trigger to stop it.

Betty saved all of them. She also was given this opportunity to talk to her sister one on one and she found out how bad it was at the farm. Edgar was losing patience fast. He threatened to kill his followers if he didn’t get what he wanted and unfortunately the FBI was never going to assist a cult leader. They didn’t negotiate with terrorists and that’s what Edgar was. And so the only way Betty could protect her mother was to work outside the FBI’s reach.

Betty reached out to her contacts to get Edgar what he wanted. She got the money from Veronica who sold her mother’s Faberge eggs to raise the cash and she got the passports from Toni. Betty got Edgar everything he wanted. She even went to the Farm herself to deliver it to him and he repaid her by knocking her out. Betty was unconscious somewhere and no one knew about it or suspected anything was wrong.

They all just went about their normal lives. Veronica was thinking of changing her name to get away from her father and her father found out. Hiram Lodge paid her a visit. He owns that jail and so he comes and goes as he pleases. He also wanted to tell Veronica a story. He told her that he was born Jaime Luna. Riverdale treated him horrible for having that name and when he got older he changed it. He chose the name Lodge because he wanted his name to be respected.

When his father found out what he did, he beat Hiram for it. Hiram never understood why his father did that and then he learned that Veronica had been planning on the same thing. He told his daughter in no uncertain terms that she wouldn’t be changing her name and so Veronica tried to find other ways to clean their legacy. She tried to hand Archie’s mom a check. And the woman refused to accept it.

Mary didn’t want to tie Archie to this town. She wanted Archie to leave Riverdale and go to college. It didn’t matter that Archie didn’t want this. Archie was so set on starting up a community center that he provoked a gang and stole their money. Archie thought they could use the cash to revitalize Riverdale. He didn’t know that the cash was dirty or that it needed to be cleaned, but Malcolm did know and he suggested that they clean the money using Veronica’s help.

Archie was so obsessed with saving his town that he was now considering going into business with drug money. His friends would normally have talked him out of this and the only reason they didn’t because they were so separated. Jughead was off dealing with a bully at his new school, Betty was breaking herself and her mom out of a compound, and Cheryl was fighting with the new night nurse that Toni hired behind her bad.

Not to mention her dead brother’s body seems to have moved all on its own. So, Cheryl had her own drama. She couldn’t be there for anyone else and the only one around Archie with any common sense was Veronica. Veronica tried to get Archie to take her money. It would be safer for everyone and she didn’t want Archie paying her back. And if that wasn’t trippy enough, the situation Betty was dealing with had gotten almost comical.

Betty and her mom didn’t just want to leave the compound. They wanted to get everyone else out of there as well and they had to do it before Edgar got to his rocket. He actually built a rocket. He even wore a daredevil outfit if that other part wasn’t funny enough and so Elvis impersonator was boarding his rocket when Alice Cooper shot him. She wanted this craziness to be over and the only way to do that was to get Edgar to “ascend”.

Mothers were amazing. Mary eventually came around and she was working to get Archie’s center approved as a nonprofit. She also wasn’t going to leave Riverdale. She was going to stick around and be there for her son. This means Archie didn’t have to worry about anything. His mother helped him to raise money legally and he now didn’t have to take Veronica up on her offer. Veronica also came to a decision about her own future. She decided to change her name to Veronica Luna. This way she goes back to her heritage and she got her father off her back.

And meanwhile, Toni found Cheryl with her brother’s dead body, which was creepy and yet it explained so much.