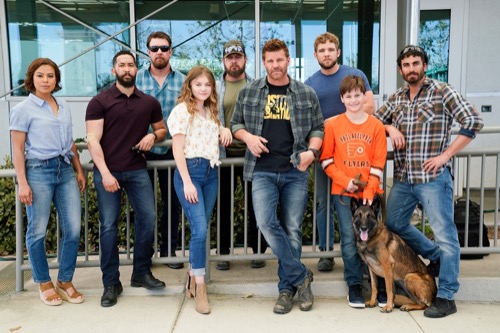 Tonight on CBS their new military drama Seal Team airs with an all-new Wednesday, May 22, 2019, episode and we have your Seal Team recap below. On tonight’s Seal Team season 2 finale episode 22, “Never Out of the Fight,” as per the CBS synopsis, “Bravo team’s future is on the line when Commander Shaw recommends they be split up, but Jason’s unit has one final mission to prove him wrong.”

Following the recovery of Ray, Eric and Mandy are in trouble with their superior Shaw for not getting Khan. Meanwhile, Ray and Jason talk. Ray is feeling happy and grateful. He cannot wait to see his family. And he is so happy for his teammates. The woman in the hut with him was his salvation, Ray tells Jason. Jason apologizes for Mexico.

Clay watches his father discuss Brett and TBIs in an interview for TV. The Bravo Team get back together. They all clap when Ray arrives. Eric comes in. Khan is in the wind and Shaw, his superior is splitting them up. Jason gets angry. He leaves to get a minute. Mandy comes in. He wonders if it is him with all this bad luck with his family and the team.

Clay’s dad gets a call from a congressman about the interview. Mandy tracks down the team as they make their way off base. She catches them in time to tell them she found Khan. They could do one last mission.

Mandy, Eric and the team get together to talk about the mission. Shaw arrives. They need to head to Pakistan.

The team arrives at their location. They take a painter’s van into the city. The target building doesn’t have a back door. They plan to use a ladder and the fire escape. They head in after Sonny shoots some lights out. After making it to the roof, they work their way down floor by floor. They take out several men on their way until they reach a room. They enter in quickly and take out a table of men. Khan runs. They chase him. Jason grabs him. Ray takes out two men, saving Jason’s life as he has Khan cuffed on the floor. They get to exfil quickly.

On their flight home, Eric tells the team they took out Khan and four very dangerous terrorists. It looks like Shaw can’t break up Bravo after all. Meanwhile, Clay meets his dad who tells him the congressman looks to be focused on his own agenda.

Clay and Davis arrive to wait for Bravo. Jason’s kids are there waiting too. The team arrives to hugs. Sonny and Davis can’t wait to get alone. Ray rushes to see his wife at the hospital. He kisses her. He’s back and back to his old self.

Jason tells Emma that Mikey might be staying at hockey camp for the summer. He also wants her to go to complete a summer program before freshmen year. He’ll be alone but it will be okay. He can’t let fear ruin their family. He is going to work the problem. She hugs him.

Mandy is informed that she is in trouble for going rogue. She explains that an asset was killed to save the seal team. Her superiors don’t care. They pull her from the field. She is done.

The team attends Brett’s funeral. Clay gets up to speak. He is sorry so many people failed Brett and most importantly himself.

Clay and Stella meet up for a drink with the team. Davis tells Sonny she heads out in six weeks. They plan to make their time count. Jason asks Mandy if she is alright. She lies and says she is tired. Jason makes a toast. He talks about the pain that has made them all who they are.

Jason drops Emma off at NYU. Stella comes home to Clay. Sonny and Davis share coffee while holding hands. Mandy stares out the window of her office. Ray baptizes his child. Jason stands in his empty home, shutting the light off. He walks past a sold sign out front. He heads to the bar for a whiskey.