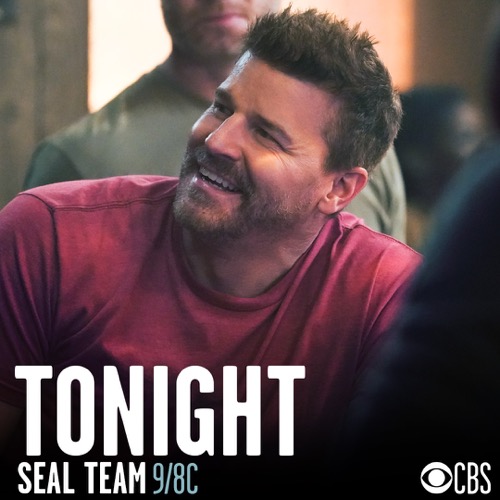 Tonight on CBS their new military drama Seal Team airs with an all-new Wednesday, December 4, 2019, episode and we have your Seal Team recap below. On tonight’s Seal Team season 3 episode 9, “Kill or Cure,” as per the CBS synopsis, “Bravo team is on a mission to protect aid convoys in an Ebola hot zone after a warlord steals preserved samples of the virus that can be weaponized.”

Nothing is the same anymore. Davis doesn’t even hang around all that much with the team anymore. She told Clay it was because things were different now that she was an officer and the truth is things have been different since the whole she and Sonny. The two were an item for a short time and now they weren’t even sure if they were friends anymore. It was awkward for them to be around each other and that’s why Davis has been slowly pulling away from Bravo. She was withdrawing because she was trying to protect herself.

Which wasn’t fair on her friendships. They still all had to work together and they received their latest mission. Bravo Team was being sent to Sinoe, Liberia. There was an outbreak of Ebola in the region and aid workers had been sent in with the vaccine. They were supposed to help people on the ground, but for some reason, the self-appointed commander of the Holy Vengeance Militia has decided to stop them. He and his crew have robbed and sometimes killed aide workers in order to get their hands on the vaccine supply.

Bravo Team has been asked to go in to protect the vaccine. They were leaving and unfortunately Jason was staying behind. His doctor wasn’t around. So, the man couldn’t clear him in time for the mission and so sadly Jason was stuck being miserable at home. He also was still going to therapy. He told his therapist about how he asked a woman out and how he’s been seeing his friends. It all seemed like he was on the road to recovery. Jason has been feeling more like himself and his doctor was very happy with his progress.

Despite how much Jason, himself, hated it. Jason wanted to go with his team and it hurt when they had to leave without him. They flew directly to the hot zone. They went to an area infected by the disease and were warned against breathing the air. Davis hadn’t gone with. She had stayed behind and arranged to meet up with her estranged sister. So she and Jason were the lucky ones. They weren’t running the risk of catching a disease while everyone that did go on the trip had come to realize how dangerous it was.

They had to cover up. They couldn’t let their skin show or breathe in the air without ventilation masks and so not for one moment did they forget why they were there. They were there to assist people like Dr. Alice Lizer. She and people like her were trying to stop the outbreak from spreading. The team had no problem with escorting her around and so the real problem was when the militia showed up. Someone must have warned the baddies about the Americans because this time militia came with guns.

They usually only needed machetes. They would threaten to cut someone in half and get what they wanted, but this time they knew that the other team was better armed and so they made sure to bring semiautomatics. They tried rushing Bravo and were eventually killed for it. Then came the intel. Mandy informed Bravo how this Dioh Morlu had managed to steal something important. His crew had stolen supplies from an aide truck and one of the supplies was a weapons-grade sample of Ebola.

Once Morlu figures out what he has, he can sell it to the highest bidder. So Bravo had to stop him and the only way to do that was to get the sample back. Clay had spoken up around then. He wanted to know why it had taken the higher-ups so long to inform Bravo of the danger and he kept pushing back. He was disgruntled with how intel treated them. They were the ones doing the hard work and it felt like they were only needed after intel ran out of options. And so Clay was upset with them, he felt Bravo deserved better.

Maybe he shouldn’t have been as vocal as he was about it, but its how he felt, and he made himself heard before he was shut down. Blackburn warned him against talking up like that again. He reminded Clay to remember his place and that actually seemed a part of the problem. Clay didn’t like being at the bottom of the food chain anymore. He wanted more and the new kid was the first to see it. The new kid had talked to Sonny about the team. He said that Ray was playing catchup, Clay wanted more out of this life, and that Sonny was the most depressed because he was desperately trying to keep the team together.

Sonny had denied it at first. But then he looked around and realized the new kid was right. He also acknowledged his own sadness about how much things are changing. He was still upset about losing Davis and Davis for her part seems to be taking the breakup hard as well. She got into a fight at a bar and got into some trouble when she punched the cop. It had been an accident. Not that the cop was seeing it that way when he arrested her. Davis was later charges for drunken disorderly and funnily enough Jason was meanwhile throwing himself into a new relationship.

And so Jason’s life was finally coming together even as everything else was falling apart.

Most especially the team.