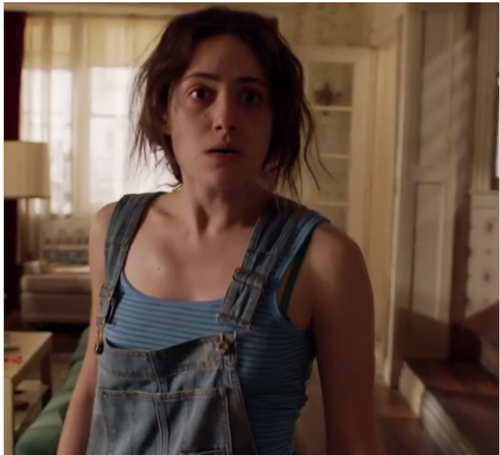 Tonight on Showtime the uniquely twisted and highly entertaining show Shameless returns with an all-new Sunday, February 24, season 9 episode 12 called, “You’ll Know The Bottom When You Hit It,” and we have your weekly Shameless recap below. On tonight’s Shameless episode, as per the Showtime synopsis, “When a blackout hits the South Side, Kevin and Veronica come up with a plan to bring the neighborhood together.

Carl grows suspicious of Debbie’s attempts to get closer with Kelly; Fiona receives guidance from an unexpected person.”

Tonight’s Shameless season 9 episode 12 is going to be great, and you won’t want to miss it. So be sure to bookmark this page and tune in for our coverage of Shameless tonight between 9 PM – 10 PM ET! While you wait for our recap, make sure to check out all our Shameless spoilers, recap, news & more, right here!

Frank is asleep outside on the front step. Lip his helping Xan pack, then they head downstairs, he wants to make her something to eat, but she says no. He says he is sorry she has to leave, but it is the best thing right now. Lip gives her some money and she gives him a bracelet she made for him. Xan leaves with DCFS.

Lip fights back the tears, then after Xan is gone, he runs upstairs and packs Fiona’s things and throws them outside. Lip has to leave, he tells Deb that Tammy is pregnant and he has to go deal with it.

Fiona goes to the diner to pick up her final pay cheque. She gets it, but not before making a fool of herself in front of the diners.

Carl is at work, Laurie is hitting on him. He goes outside and calls Kelly. He tells her that the Buccaneer Biscuits that were his idea were a big hit.

Kevin is on ice from the vasectomy when Fiona walks in. V has no pity for Kevin. Fiona asks V to cash her cheque, then she tells her to keep it because she is ready to drink. All of a sudden the power goes out, it is a citywide problem.

Frank wakes up, its a blackout and he goes to the see the professor, he has a generator, Frank makes a deal for cost plus 15% to sell his supplies at a higher price.

V tells Kevin that she spent $500 on steaks if the power doesn’t go back on they are going to lose everything.

At work, Carl and the guys want to leave, Laurie says no, they could all clean the kitchen. Laurie ends up letting Carl leave so he can spend time with Kelly, but he soon finds out she can’t.

Lip goes to see Tammy, she tells him that the pregnancy doesn’t involve him at all. He tells her that if she decides she wants to keep the baby, he wants to be a part of it. He tells her about Xan, but she has only known she is pregnant for two days and needs time to think about it.

Frank arrives at the bar and says hello to all the sweat hogs. He sees Fiona and she tells him that she was fired. He tells her that Ingrid left him and took all his children with her, life is not all rainbows. Frank tells her about his blackout supplies, he charges a little more, but it is all a business, he offers to let her in on it.

Deb is texting Kelly and Carl is furious because Kelly is not supposed to text. Deb stops texting, she says she is going to meet Kelly, Carl follows her.

Kevin heads over to Gallagher’s house and takes a lot of clothing out of the closets.

Frank and Fiona are talking and walking through the neighborhood, she has an idea, they steal a kids pool from a yard. They then go to the diner and steal ice from there.

Lip is at work, Tammy being pregnant is driving him crazy and he is having trouble working. Tammy’s sisters drop by, they warn him that if he hurts her, they will mess him up. Lip says he wants to do the right thing. Brad tells Lip to take the day off, he is having a bad day.

Fiona and Frank’s business is booming. They have a stand setup that is called Gallagher Blackout Stand.

Fiona arrives home and finds her clothes outside on the front yard, she grabs the bags and runs inside. Lip is there, Fiona freaks out and he tells her that he is not letting her life there. She starts screaming the title is in her name. Lip tells her to get to a meeting, she opens the fridge and grabs a beer. Frank tells lip that he should be thanking Fiona, he couldn’t have raised six kids without her.

Kevin is back in the bar, he put all the coats on the freezer to keep it cold but it didn’t work, the steaks are already unthawed. He has an idea, have a $5 cookout, surf and turf for the community.

Frank and Fiona are going over the money they made, he gives her her half and she wants to renegotiate. Frank gives her more and says she is worse than the mafia. Frank has the share for the professor and she says screw the professor. He tells her that she is a bad drunk, she gets mean.

Carl is with Kelly, she is packing her things up, while Deb moved into the front seat beside Kelly. Deb says the Alibi is having a cookout, they head over there.

At the cookout, Kelly has just about had it with Carl and Deb fighting over her. Frank gives Kevin some ice, free of charge, to help him with the swelling. Music is playing and everyone starts dancing. All of a sudden they find out that 90% have power, but the south side. Fiona organizes a march, everyone joins in.

The march continues, then all of a sudden power is back. Frank turns the crowd around to go to the Alibi and get a drink. Fiona says she is continuing on to tell the north side it’s not right, everyone leaves with Frank. At the Alibi, Kevin makes an announcement, it was a good day. They found the true power of the south side, don’t work and get drunk. Fiona screams and tells them to f-off because they did nothing. She says they talk a big game and do nothing. V goes around to the other side of the bar and tells Fiona to calm down. She then tells Fiona that she can’t stay with them. Fiona says she understands, V says she is sorry and gets up.

Deb, Kelly, and Carl are back at the house. Deb goes upstairs to bathe the little one and Carl grabs a beer, then he asks Kelly if she is screwing Deb. She calls him insane and tells him that he is overthinking things. She tells him that she wants to break up, she leaves. Tammy arrives at the door to see Lip. They start talking about the baby and being together, they end up laughing.

The next day, Fiona wakes up, she slept on the floor, she starts vomiting, has one shoe on. She starts crying and realizes everything she lost.

Lip is at AA when Fiona walks in. He turns around and sees her.