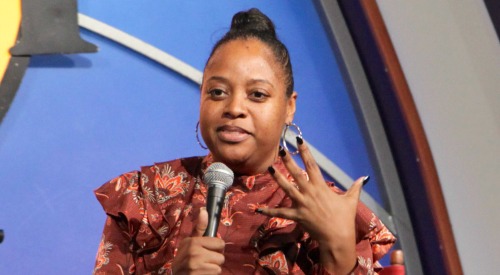 Sherri Sheperd has weighed in on the college bribery scandal that has rocked the celebrity world. The comedienne called fellow Hollywood actress Lori Loughlin “stupid” for reportedly paying up to $500,000 to have her daughters, Olivia Jade and Isabella, accepted into the University of Southern California. Along with her husband Mossimo Giannulli and actress Felicity Huffman, Loughlin has been indicted for what many are calling the largest admissions scam prosecuted by the Department of Justice.

According to TMZ, Sherri went off on the difference between black and white parents, while hinting that many of the parents might have taken their cue from certain sitcoms. When asked about the scandal, Sheperd told the site, “It tripped me out. White privilege. I think everyone has a good run. It’s over. I even saw the same storyline with Aunt Becky on Fuller House. It was also a storyline on Shameless. You will never see that storyline on Good Times, Livin’ Single, Girlfriends, never. It’s a problem for them, not us. We actually go by the adage to work hard, be twice as good and work twice as hard.”

Sheri also said that the parents involved, including Lori Loughlin, were stupid to pay for college mostly because all their children wanted to do was party. Olivia Jade herself made it pretty clear in numerous vlogs that she wasn’t interested in studying or attending any of her classes for that matter.

In fact, the YouTube personality said that the one thing that has kept her at USC are the “game days and the parties.” She’s also said in interviews that her parents have pressured her to go to college even though she has zero interest in her studies.

Meanwhile, it’s been reported that Loughlin’s daughters Olivia Jade and Isabella will not be returning to the University of South California because they are afraid of the vicious bullying they might endure from their peers. If that weren’t enough, it doesn’t look like they will be enrolling in any other schools in the near future, either. So far Loughlin herself hasn’t made any comments about the scandal, although it’s been reported that both the Hallmark Channel and Netflix’s Fuller House have cut ties with the actress.

In the meantime, don’t forget to check back with CDL for all the latest news and updates on Lori Loughlin and your favorite celebrities right here.