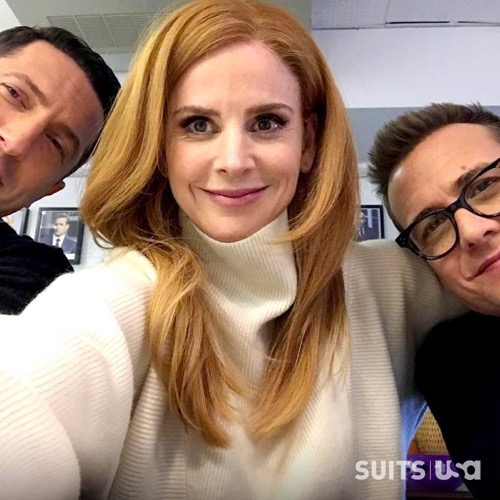 Tonight on the USA Network their critically acclaimed drama, Suits returns with an all-new Wednesday,  February 20, 2019, episode and we have your Suits recap below. On tonight’s Suits season, 8 episode 15, “Stalking Horse,” as per the USA Network synopsis, “Donna’s relationship complicates a deal for Harvey and Alex. Samantha helps Louis get justice.”

Tonight’s episode opens as we look back at a younger Donna with her mother who surprises her that they are going to Paris after she graduates.

Donna is in bed, Thomas tells her that he is happy about a deal that is going great and loves that he can share it with her.

Harvey meets Simon at 8 am, he tells him that he has invited Thomas Kessler furniture into the deal. Harvey tells him that it is a conflict because he represents Kessler. Simon says they are a national chain, flowing with cash and they need tenants. Harvey reconsiders, tells him that if he wants Kessler, he gets it.

Louis is out shopping with Sheila, they are actually putting together a baby registry. Louis gets a call from a detective who asks him if his wallet was stolen recently. The detective says they may have just arrested the man who stole it and wants Louis to go down there and identify him in a lineup.

Harvey goes to see Alex and tells him that Simon wants Kessler to be their anchor in twenty new malls. Alex tells him it is a conflict but he will take it to him.

Katrina gives Brian his first client and he wants her to work with him.

Donna is in her office, Harvey walks in and she tells him she wants to talk about her seeing Thomas. Harvey tells her that she doesn’t have to tell him every time she sees a client. He goes on to tell here about Simon’s offer, he has set up a meeting for them tonight. Donna is happy, Thomas’ business means everything to him.

Louis goes to speak to Samantha and tells her that the detective wants him to go on the stand and point the finger on his attacker. She tells him that if he doesn’t take the stand, the fear will never go away. Samantha tells him to go and she will support him every step of the way.

Harvey, Alex, Simon, and Thomas meet. Simon says he chose him because he believes in him. Harvey says it is a good offer. Thomas and Simon shake hands.

Samantha and Louis are still talking, he tells her that his attacker hurt him and he is afraid to talk about it in court. Samantha tells him that if he doesn’t put him away he will haunt him for the rest of his life. Louis says that when he pointed the gun at him he had never been that afraid.

Louis goes to court, Samantha is in the courtroom for support while he tells his story. The defense says that there is no need to cross because everything that Louis just said is irrelevant, the date on the warrant doesn’t match the date of the search, therefore the evidence against his clients is inadmissible. The judge says that the guy is free to go.

The next morning Harvey is on the phone with Simon who says he is not signing the paperwork because restoration came back to the table an hour ago. Harvey is upset, Simon shook Thomas’ hand and lied to Harvey’s face. Simon says he did what he had to to make a deal happen and he doesn’t need to justify himself to his own lawyer. Furthermore, he instructs Harvey as his lawyer not to say anything yet to Alex or Thomas.

Katrina is helping Brian with his case. Samantha is waiting for Louis when he arrives in his offer, she tells him that she wants to talk about what happened in court. Louis says it is over, Samantha says it doesn’t have to be. Louis doesn’t want to talk about it, he tells her he is mad that she convinced him to testify and it is over.

Harvey is in his office and Alex walks in, he asks him a hypothetical question about one client maybe screwing another one. Harvey tells him the truth, and the idea is to stop the deal with restoration so that Simon is forced to do the deal with Thomas without Thomas knowing the truth.

Louis has a nightmare about his attacker coming into his bedroom and shooting Sheila.

The next morning, Louis tells Samantha that he is in, she says to let her do what she does best.

Donna goes in to see Harvey and tells him that Thomas is so excited about the deal, she wants to take him out to celebrate and is hoping it will close by tonight. Harvey says it won’t be tonight, they need to still need to get approval from Simon’s board. Donna guesses that something is up and tells Harvey he better tell her what is going on or she will go to Thomas. Harvey tells Donna the truth. Harvey tells her that he is working on fixing this, but Thomas can’t know about it and he is busting his ass to get them out of it.

Robert goes to see Samantha and asks her what is going on with her and Louis. He says he heard about what happened in court and wants her not to do what he knows she is going to do, she will regret it. Robert tells her to find another way.

Donna calls her mom, asks her if she remembers when they were going to go to Paris, she says yes. Donna asks her if she regrets giving dad the money, she says no, he never let her down and he is the kindest and gentlest man and if she didn’t have faith in him, it would have gotten to him for the rest of his life. She says that she regrets not taking the trip and to not let those once in a lifetime moments pass her by.

Later, Brian tells Katrina that she continues to surprise him.

Samantha tells Louis change of plans, she hands him a folder about the attacker’s family, he is reluctant and she tells him that it is about his family too.

Thomas and Donna are enjoying a glass of wine, he tells her that he was offered a deal better than Simons but turned it down because he shook Thomas’ hand. Donna tells him that she doesn’t feel well, she is going to go get some fresh air and some ginger ale. Donna calls Harvey and tells him what Thomas said, he tells her just to have faith, he will fix it.

Samantha and Louis go to see his attacker and tell him that they know that the mother of his child is a recipient of section eight benefits as is in fear of losing them. They threaten to go to the housing authority and tell them he is living there and has a criminal record. The guy tries to scare Louis but he isn’t scared in the least. Louis tells him to admit that he did the crime or he is calling housing authority and getting them all evicted. The attacker has no choice.

Back to Donna when she was younger, her mom goes into her room and tells her that she has to give the Paris money to her father to buy a building.

Thomas is up, Donna looks at him and tells him the truth about everything regarding the deal. She tells him that Alex and Harvey are trying to fix it.

Thomas goes to see Alex, he says he is taking the other offer, it is his business and reputation.

Katrina says good morning to Brian, he says that last night he was having dinner with his wife talking about the case and her, his wife noticed a look on his face, she asked if anything ever happened between them and he said no. He announces that he can no longer work there, she begs him not to do this, but she respects his decision, he says goodbye.

Alex tells Harvey that Donna told Thomas everything, he is pulling out. Simon is furious, he wants to know who told Thomas. Simon fires Harvey and walks out.

Robert asks Samantha what she did, she says she did what she had to. He says she can’t take matters in her own hands and he is afraid it is going to become a bad thing for her.

Brian goes in to see Louis, he tells him that he is leaving. Louis asks if it is about Katrina, he says yes.

Donna goes in to see Harvey,, he tells her that he doesn’t want to speak to her. She says that she is not going to feel bad about putting someone she loves over the business. Harvey is upset and she tells him that the only reason he is upset is that she choose Thomas over him. He says that he is angry because she lost faith in him and that has never happened. Daniel walks in, Simon hired him after he offered his services free of charge. Daniel says that Harvey broke privilege and now he is going to make him pay.