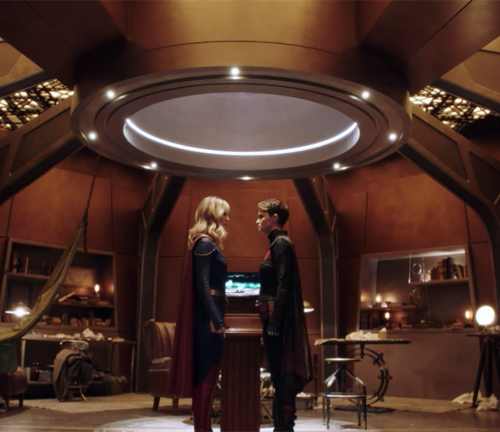 With their worlds in imminent danger, the superheroes suit up for battle while J’onn (David Harewood) and Alex (Chyler Leigh) recruit Lena (Katie McGrath) to help them find a way to save the people of Earth-38.”

The multiverse wasn’t that complicated. It was basically several possibilities played out over several different universes and in each one there was a hero. Someone with unique capabilities if not powers that were willing to step up to protect the planet. Supergirl was one such hero. She was doing her part for the planet when she felt the first of many earthquakes and had to deal with the results. She had to help the pets in the area because they were all going crazy. It seems they were sensing something she wasn’t and so she flew back to base the first moment she could to find out what was happening.

Thankfully, Brainiac-5 had answers for her. He said a shockwave has been set out over the universes and that it could even destroy planets. The first planet in its way was Argo City. Kara called the planet and she warned Superman that it was coming. He didn’t have time to evacuate with Lois Lane and so they did the next best thing. They sent their baby son Jonathan in air pod bound for earth. The parents had wanted their son to survive even if they didn’t and so it was by chance that the Harbinger arrived to save them. The Harbinger was sent by the Monitor to gather the greatest heroes and she saved Superman and Lois before they were killed.

The two can now help with the wave of dark matter that’s attacking the planets. All that they asked is for someone to track down their son and Brainy said he was on that, but the Harbinger also brought other heroes as well. Lyla or the Harbinger as she’s now known has brought together the Flash, the Legends, Batwoman, the Green Arrow, and his daughter Mia to help. There also something called the Quantum Towers. The Monitor set up the tower ages ago and that’s what these waves are going to be attacking. And so everyone needed to focus on protecting the tower even if it meant they couldn’t personally go find their son.

Oliver talked to Clark. He was a father himself and he knew what Superman was feeling. He also said that the whole planet was in danger. It would be safer for the baby if the planet were first saved and it’s not like Lois couldn’t look for him. She was going to try finding Jonathan with Brainy’s help. She has to search for her son over the multiverse and she promised Clark that she would find him. Not that it helped him much. Clark told Kara that he wonders if everything that was happening was somehow because he dared to have a normal life. They even lost Kara’s mother because they thought they could start over at Argos and so he blames himself for taking his eye off the ball.

Clark wasn’t the only one having a crisis. The Flash told his good buddy the Green Arrow that he talked to the Monitor and that the man confirmed that he was supposed to die this year. Only this came as a shock to Oliver because he has his own deal with the Monitor. He demanded that the Monitor see him right then and there and then he confronted the man once they were face to face. He made a deal with the Monitor that was supposed to protect his friends and so he was demanding to know what happened to that deal. Why the Monitor suddenly saying something else now? The Monitor as it turns out had saved Barry and Kara last year and that was the deal.

What’s happening now is something new. Barry is going to die as the Flash and there’s nothing Oliver can do to stop it. Anyways, that has no bearing on what’s happening with the multiverse. Oliver had to go back and he did. He went to go support his friends. He took Mia with him and he finally gave her her own arrow. Oliver then took the others into the tower. They had to protect the building from an impending alien army and speaking of aliens – J’onn had an idea. He suggested that they turn to the many aliens on the planet and ask them for help in evacuating the whole planet.

He also realized they needed Lena Luthor’s help. Alex went to go ask for it and, despite her fears, Lena didn’t turn her down. Lena was willing to help because she’s not the monster everyone thinks she is. She does have a heart and she knows better than to trust in a fake friendship. Lena was now working with Alex to evacuate the planet and the planet was running out of time. The tower was losing its power. The red sky had come back and the alien army was stronger than ever. The heroes banded together to stop the shadow demons that were attacking and in the meantime, the planet was being evacuated.

The heroes planned on fighting to the last minute, but then Monitor showed up. He said the battle is lost and they had to save their resources. He started collecting the heroes and the only one he didn’t get was Oliver. Oliver shot the Monitor just to make sure he wouldn’t be taken. He wanted to fight until everyone was evacuated and that’s what he did. He fought to the last. He didn’t die there though. He was still grabbed by the Monitor and was taken to Eath-1. He saved millions with what he did and thanks to him at least three out of seven billion made it off that dying planet. And so Oliver died being the hero that is.

The Monitor just made sure that he was surrounded by friends and family when it happened. He did that because he didn’t foresee this ending for Oliver. He saw something else and the release of the Anti-Monitor has changed everything and everyone’s fate.

And so it’s only fair that the man that released the monster now has to watch how it unfolds.