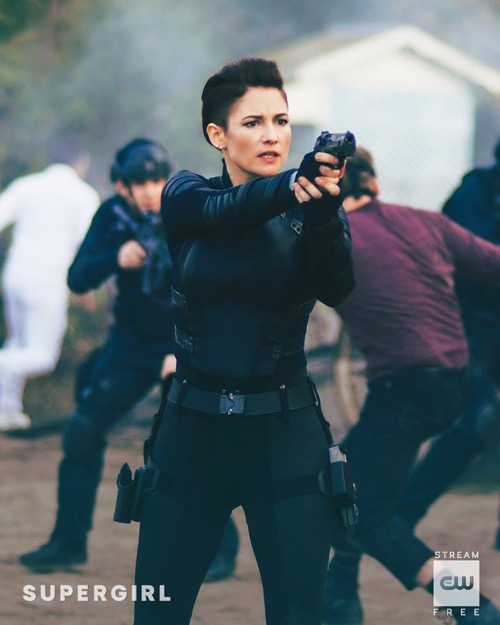 Tonight on the CW the series Supergirl airs with an all-new Sunday, January 27, 2019, season 4 episode 11 and we have your Supergirl recap below. On tonight’s episode called, “Blood Memory” as per the CW synopsis, “Kara joins Nia on a trip to Nia’s hometown to visit her family during the town’s annual Harvest Festival. While home, Nia’s mother encourages her daughter to embrace her destiny.

Meanwhile, Alex deals with a street drug that is turning people violent and giving them temporary superpowers.”

Kara flies through the air and grabs a missile for a Russian leader. She returns to the ground and realizes she is bleeding from her nose. She faints. They rush her to the medics.

A group of teen boys is hanging out. One of them takes a pill and turns into the Hulk. The other 2 runs back inside their trailer.

Kara, Brainy, J’onn, Alex and the others are playing games. Alex cannot remember Kara’s favorite movie. Luckily, she gets a text from work ending the awkwardness. Alex runs to the scene of a teen boy fighting with a group of others. Supergirl arrives to help. After, Alex asks her to call her Agent Danvers not Alex.

Kara talks to Jimmy. Alex’s mind wipe is bothering her. One of Jimmy’s reporters interrupts. She wants to pitch a sensitive story about Luthor Corp. After she tells him the company is hiding something, he gives her the green light.

Brainy tells Alex the contusions she has on her hand is from the truth seeker. They will go away soon. In the meantime, he has figured out the species they were dealing with the night before, frat boys.

Kara offers to go back to Nia’s hometown with her. In the car on the way, they talk about Nia being trans and her family being so accepting. She asks Kara not to mention her dreaming powers.

Alex pulls the frat boys in to ask them where the pills came from. She can’t seem to crack them. Meanwhile, the other frat boys who weren’t brought in decide they need to see their pills after seeing the reaction to the video posted online.

In the car, Nia dreams of her mother combing her hair at vanity with a glass of wine. Suddenly she bursts into a crow and flies away.

Nia introduces Kara to her family. They sit for lunch. Nia’s sister is growing impatient about not dreaming like her mother yet. Alex feels like she is missing something, some information that was important to her. She asks J’onn to scan her and make sure she is all right.

Nia tells Kara she feels so guilty she got the dreaming powers and not her sister. Meanwhile, J’onn pretends to scan Alex to give her piece of mind.

Alex has Brainy pose as a frat boy. He enters the cell of the guys who won’t talk and pretends to also have been arrested to get information.

Later, Nia is dreaming of her sister. They are sitting for a meal with wine. Suddenly spiders are all over the table. Her sister wakes her. The town is having an impromptu memorial for their mother. Nia’s sister shares that she should be a dreamer by now and she could have saved their mother.

Jimmy arrives to see Lena who is preparing a trivia game for them.

The frat boys make a stop to meet some customers they plan to sell their pills to. Before they can get their money, the deal goes sideways and they get jumped. One of the dealer’s sisters is inside the van. She sees a purple pill on the ground and picks it up.

Nia tells Kara she dreamt about her mother on their ride there. She would have understood the dream if she studied like her sister. Kara consoles her.

Alex, Brainy, and J’onn arrive at the scene of the frat boys. They arrest them. The guys admit they were robbed and one of their sisters took the van. The customers mentioned going to an alien festival.

The dealer’s sister takes the pill as she drives to the festival.

Nia’s father pulls her aside to talk to her. He has a box for her. It is from her mother. At the memorial, all is dressed in white. Nia’s sister talks at the podium about her mother. Nia sees the future. She runs to push her sister out of the way just as a madman with an ax breaks down the wall of the barn they are in. Several men with superhuman strength start attacking the crowd. Kara transforms into Supergirl. Alex and the guys arrive. They all try to take control of the situation. Supergirl interferes when Alex touches the dealer’s sister. Alex gets angry and tells Supergirl to back off. They get into a dispute. Alex doesn’t think Supergirl has ever felt vulnerable and weak. Supergirl shares that she has even if she is the girl of steel.

On the ride home, Kara shows Nia that she is Supergirl. She does it because she doesn’t want her to feel alone.

Jimmy calls his reporter in and tells her to squash the Luthor Corp story. Everything is above board.

At home, Nia opens the box from her mother. It is a dress.

J’onn tells Kara that the mind wipe on Alex has affected her perspective on the alien race.

Supergirl lays on a stretcher unconscious. A Russian soldier calls into his base and tells them he needs to reach someone in America.