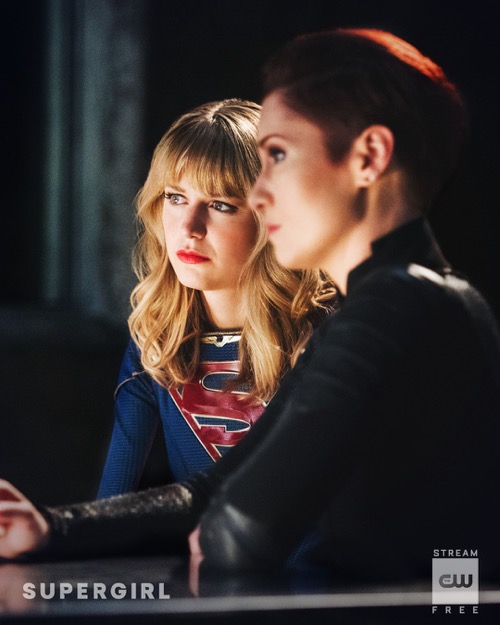 Tonight on the CW the series Supergirl airs with an all-new Sunday, November 3, 2019, season 5 episode 5 and we have your Supergirl recap below. On tonight’s episode called, “Dangerous Liaisons” as per the CW synopsis, “Kara and William team up on an investigation that exposes a terrorist plot on the eve of the worldwide launch of Andrea Rojas’s VR contact lenses. Meanwhile, Kelly and Alex celebrate an anniversary, but Alex’s safety is in jeopardy.”

Kara was trying to keep William’s secret. She really was and therefore it wasn’t her fault that an opportunity fell into her lap. Kara found out her sister recently arrested an assassin. It was believed this assassin connected to William’s case against the Rojas and so Kara had a way to tie her two worlds together, but to do that she had to convince William to let her in on his investigation. She talked to him and did her best to explain what had happened. She didn’t want much in return so all William had to do was agree.

He had to agree to her becoming involved in the story. Kara didn’t want to be a part of it because she didn’t necessarily see it as a story and so she wanted to become involved because she wanted to help. Kara eventually got William to agree to her demands. He let her in on the case and he signed an NDA with Alex. With that out of the way, Kara took William to Alex. Alex hadn’t questioned her assassin yet and so she let both Kara and William sit it on it. There were just there as observers. They weren’t supposed to question the suspect themselves.

Which fine at first. Kara and William listened as the assassin otherwise known as Breathtaker. She described being paid with cryptocurrency and that she didn’t know much besides her own assignments. This got to William because he swore she knew more. He tried questioning her himself and he grew so out of control that Alex had to order him out of the room. Kara followed him because she wanted to know what happened there. She believed there was more to his story than what he told her and so she pushed until she got the truth.

William told her about Rip Roar. Rip Roar was another assassin for the Rojas and William said the man killed his best friend. He believes that if they find this Rip Roar that they could finally get the evidence against Andrea Rojas. His other source Elena Torres had alluded to it. William just needed to prove it definitively and so Kara agreed to help. She secretly used her other persona as Supergirl to get answers and with Brandy’s help, she heard firsthand how the assassin doesn’t care who gets hurt. And so Kara wanted to stop Rip Roar as well as Andrea at any cost.

Especially as Rip Roar stole tech from Lex Luthor. He managed to get his hands on a weapon called Marathon Laser and this weapon could allow him to kill a bunch of people crowded together. This Meta Assassin could also be working with Andrea again and so Kara thinks that they might be planning something for the VR launch. Kara later told her sister that the way she feels reminded her of how she felt when Lex Luthor came close to ruining the world. She knew in her bones that something bad was coming.

Kara believes Andrea to be dangerous. Its why she started taking bigger risks and why she broke into Andrea’s inner sanctuary. She broke in around the same time that William did. Luckily, it was just the two of them there. They search the office and they found foreign currency plus a picture of Andrea with William’s friend. It turns out there was more to the story. William said his friend Russell Rogers had been dating Andrea and that Russell was nervous about introducing her to anyone because he felt he had to prove himself.

Russell told William that Andrea’s family had secrets. William had joked back then if it involved bodies and Russell had been very grim. He wouldn’t exactly say what the Rojas was doing. He just inferred that he needed to make them happy and that was the last time the two friends spoke. The next time William went over to Russell’s place he ran into Rip Roar. Rip Roar wouldn’t tell William what happened to his friend or if the Rojas were involved and so William had attacked the assassin. They got into a fight and Rip Roar won.

Only he didn’t kill William when he had the chance. He let William live and William has been searching for him ever since. William said he tried to get justice for his friend. He went to the police and they couldn’t do anything because there was no evidence of a relationship between Russell and Andrea and there was nobody. It was hard to prove a murder if there wasn’t a body. The police came to believe that Russell simply left and so it just been William that’s been left looking. Kara had promised him that would keep digging and she did.

She soon found Rip Roar. Kara confronted him and they got into a nasty battle that he ended up winning again. Kara was left weak. She had needed J’onn to come to her aid and while he was at it he also took a look at the supposedly late Russell’s apartment. J’onn said the only thing he psychically found was evidence of the fight between Rip Roar and William. He didn’t see Russell’s death and that leads him to believe Russell might still be alive. The two of them would have liked to have followed up on it though they were left with little choice when they found out Rip Roar’s plan.

Rip Roar had taken the weapon to Lake Vostok. It was a base in Antarctica base and if the assassin used the Marathon Laser there. he could unleash a flood large enough to rival that of the biblical age. Kara and J’onn flew to the base and unfortunately, there were too late to stop Rip Roar. He released a crack into the glacier that could put the entire planet at risk. Kara and J’onn stopped the cracking from becoming something bigger and their allies back in the states stopped the tidal wave from hitting pedestrians.

Kara and J’onn also brought in Rip Roar. They couldn’t break him like everyone else because his armor acted as a mental shield and most importantly they learned he wasn’t working for the Rojas. The Rojas’s manufacturing plant would have been affected by the tidal wave. They could have lost millions if Rip Roar’s plan succeeded and so he was working for someone else. Someone even more sinister. And if that wasn’t bad enough, Rip Roar was revealed to be Russell.

But there was some good news.

Alex never told Kelly that her boss could be evil and so they got to celebrate their anniversary in peace. So, they didn’t know Andrea met with this sinister force. There was also what Lena has been doing. Lena used J’onn’s brother to understand mind control and now she has the power to control him. With that last part being both a good and bad thing.