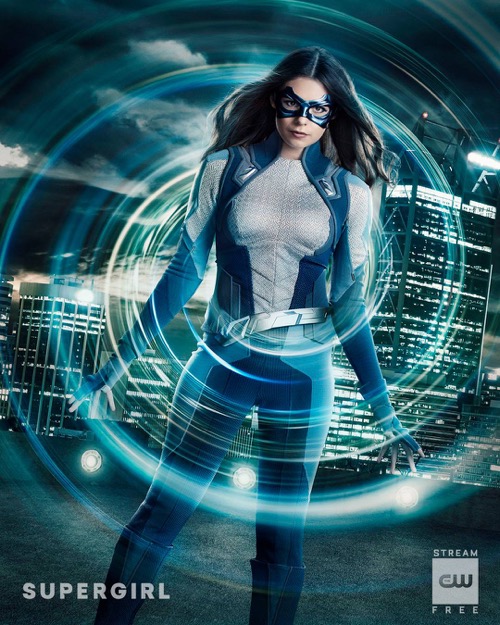 Tonight on the CW the series Supergirl airs with an all-new Sunday, January 20, 2019, season 4 episode 10 and we have your Supergirl recap below. On tonight’s episode called, “Suspicious Minds” as per the CW synopsis, “Colonel Haley is upset after Supergirl responds to a distress call from a Navy ship that turned out to be a deadly alien attack. Colonel Haley reclaims the site as DEO territory and demands that Supergirl step aside.

After Supergirl refuses to be told what to do, Haley refocuses her energy on finding out Supergirl’s true identity and begins to interrogate all DEO agents, including Alex. Meanwhile, Brainiac-5 tries to persuade Nia to embrace her superpowers but she misinterprets his motives.”

Kara takes out a missile in the sky. In the distance, the Russian military talks about training her harder.

Kara and Lena are in cycle class. They haven’t seen each other in a while. Lena has been working too hard. Kara hears something in the distance. She fakes a leg cramp to leave and get to the scene of a troubled shoulder. She helps the soldier and discovers several dead soldiers on a ship with a bomb. One of the soldiers gets pulled into the ocean. Kara hurls the bomb into the sky. It explodes.

Colonel Haley arrives to question Kara who tells her about the bomb and the creature that pulled one of the soldiers into the water. Alex is also there. The colonel questions Kara about the scene and then comments on why she is still helping when the DEO dismissed her. She tells the colonel she doesn’t care, she is still going to be a hero.

Brainy meets with J’onn and offers him money to help Kara. J’onn doesn’t want the money. He will help her. Meanwhile, Alex talks with the colonel who wants her to help find this creature and find out what Supergirl’s real identity is. Kara texts her that the coast guard knew nothing about the ship.

Alex meets with Brainy and the team and tells them that the colonel wants Supergirl’s identity. They all agree to protect her. The colonel shows up. She wants to know why they are all talking. Alex tells her they are being debriefed.

Alex and Brainy talk. There is no record of the ship or Colonel McAllister who died on it. It seems like a cover-up. Later, Alex tells Kara all about what is going on.

Lena shows up to see Jimmy. It has been awhile. He admits that while he blamed her for selling out, he did the same thing. They kiss.

Brainy calls Nia to ask her out. It’s awkward but sweet. She says yes. The colonel interrupts Brainy to talk about Supergirl.

J’onn shows up to see Kara and help her with the shimmer creature they are looking for. They go through files and find proof that McAllister did in fact exist. Haley is also named in the file, proving she knew who he was.

Alex runs into Brainy who has used his “brain compartmentalization” technique so well he doesn’t think Kara and Supergirl are the same people.

J’onn, Alex, and Kara meet up with Colonel Tan who admits that the ship was taken out by alien children trained to be assassins. The president handed down the orders to no longer work with aliens but the soldiers were unable to stop them. Just then, one of the aliens arrives and goes after Tan who gets in his car and tries to flee. He flips his car over while Kara and Alex try to talk to the alien. The alien says no DEO or Haley. It falls to the ground and collapses.

Alex confronts Haley who says she never worked with a McAllister. She denies it all. Alex tells her about the alien collapsing and killing itself at the mention of being brought in to the DEO. Haley tells her that they are going to come for her next. She tells Alex to prepare everyone for an assault.

Brainy tells Nia on their date that he is surprised she wanted to go out with him. He asks her if she wants to help Supergirl. She is reluctant to help. He tells her to think about it before leaving.

Jimmy attempts to make a souffle. Lena teases him as they hang out in the kitchen. She confesses to him her latest project involving enhancing human capabilities. She needs him to support her and not be mad. He tells her he will.

Alex and the team talk strategy for the assault. Lawrence tells Alex that Haley has demanded they use lethal force and not just stun guns. Alex calls Kara and tells her she cannot work with Haley anymore. She wants to resign. Kara tells her not to. They need her. Alex heads to see Haley how tells her she knows her secret after talking to one of her peers. The alarm sounds, interrupting them.

Haley tells the team to open fire as soon as they see anything. They take out one. Brainy is attacked by another and thrown from the top level. Haley attempts to get one on her own and is grabbed. Her gun goes flying. Supergirl shows up and saves her life. Haley tells her she knows who she is. She demands she obey her orders. Alex arrives. Haley demands the same from her. Alex knocks her out. They call J’onn and have him erase her mind.

The next day, Haley has a truth seeker brought in. Alex, J’onn and Brainy meet with Kara to tell her. Alex wants to have her mind erased too to keep her safe. Kara cries. She doesn’t want that. Alex tells her they need to do it.

Later, J’onn works to erase the team’s minds of all things Supergirl while Jimmy thinks about what Lena told him.