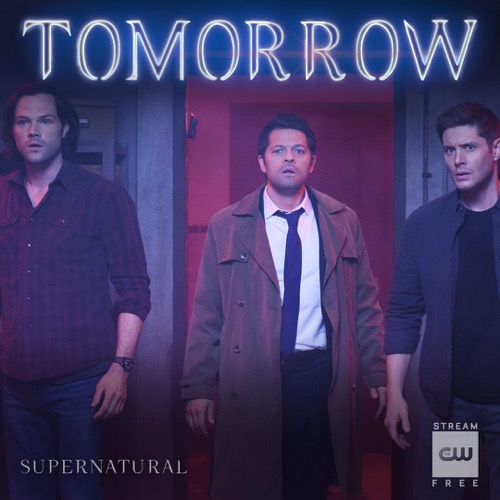 Supernatural airs tonight on the CW with an all new Thursday, April 11, season 14 episode 19 called “Jack in the Box,” and we have your Supernatural recap below. On tonight’s Supernatural episode as per the CW synopsis, “Sam, Dean and Castiel investigate a string of suspicious deaths that have a biblical element to them..”

Sam, Dean, and Cas host a memorial for their mom in the bunker with those that knew her. Dean toasts the time they had with her. Bobby arrives in a violent manner, throwing a hatchet across the room at a monster who arrived to gloat. Bobby wants to talk about Jack and what happened.

Jack sits alone and talks to Lucifer about what he has done, recalling Mary’s pleas for help. Meanwhile, Cas has arrived in heaven. He wants to see Naomi but Dumah tells him she is busy. He needs to talk to her about Jack. Dumah offers to help Jack.

Dumah tracks down Jack and plays to his good side, telling him she knows it was all a mistake he made with Mary. She tells him he has so much more to offer that would make the world better. Something that would make Sam and Dean happy. She brings him to see a university professor who Jack punishes. Dumah looks pleased.

Cas arrives to tell Sam and Dean about how heaven is going to help them find Jack. Sam has other news – a professor was killed and in a very suspicious way.

Jack arrives at a church where they are having a meeting. He introduces himself. He offers them an invite to heaven. They are all in awe after he spreads his wings. One man doesn’t believe him. Jack attacks him with worms that eat his body.

Sam and Dean head to the hospital where they meet the man attacked by Jack. He identifies Jack and shares how he took them all to heaven. After Sam and Dean leave the room a work comes out of the man’s mouth.

Sam and Dean talk. How are they going to try and stop him? Containment seems to be the only way. Dean thinks they need to lock him in the box that he made for himself and Michael. They can get him into the box by telling him they plan to fix his soul. Dean wants Sam to tell him as sincere as possible. If he does it he will lose it.

Cas is told that heaven has been closed to him. Meanwhile, Jack has brought the church group to heaven and has begun making angels per Dumah. Cas manages to break in. Cas tells him that Sam has a message for him. Cas talks to Dumah while Sam tells him they need to talk. They need to see him. Cas tells Dumah he is taking Jack. She tells him he isn’t. All she has to do is snap her fingers and its over. Cas takes her out with the angel sword. She drops.

Jack arrives in the bunker and tells them he has been working to purify the world. He regrets what happened. It was all an accident. They talk him into going into the casket that was made. He is reluctant at first but then goes in. Sam tells them they have this. After a few minutes, he yells for them but they don’t answer.

Inside the box, Jack talks to Lucifer. Cas arrives to see Sam and Dean. Dumah was the one manipulating Jack. He asks where he is. Sam and Dean tell him that Jack in the box and that is where he is going to stay for a while.

Lucifer tells Jack that this is it. He killed their mother. He isn’t going to get out. Cas is angry with Sam and Dean. Jack tries to get out, shaking the box so much it makes the alarms in the bunker goes off. The guys run to him. He is out of the box.