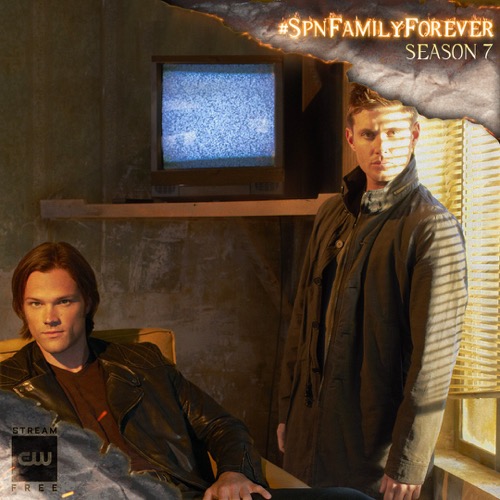 Supernatural airs tonight on the CW with an all-new Thursday, November 14, 2019, season 15 episode 5 called “Proverbs 17: 3,” and we have your Supernatural recap below. On tonight’s Supernatural episode as per the CW synopsis, “Sam and Dean’s routine case turns out to be anything but.”

A group of girls are on their annual camping trip in the forest of Colorado. While in their tent drinking they hear a noise. One of them goes to get more rum when she lets out a scream. The other two girls sit still, terrified. When one goes to look she is attacked.

Dean returns back to the bunker after going on a supply run. He scares Sam who is trying to text Cas. Dean eats some hot ghost jerky and pretends he likes it before begging Sam fo this water. Dean tries to talk about their latest case, three dead by a supposed mountain lion. His eyes are watering and he is sweating.

Sam appears to be having bad dreams again when he wears all white, sitting at a table. Dean tries to kill him with the colt but it doesn’t work. Sam sets him on fire. He wakes up next to Dean. They are on the road headed to their latest case. Dean asks Sam to tell him about his dream – he will “Freud” him. But Sam says no.

They arrive in Colorado where they dress up as Fish and Wildfire – Dean’s idea! They speak with the female sheriff who tells them they don’t see like animal attacks.

Sam and Dean meet with the one surviving girl, Ashley. She can’t talk about it. She gets upset. Dean talks to her alone. He tells her whatever she has to say he will believe. She tells him it was a man with claws and fangs. He thinks its a werewolf. She tells him there is no such thing. He tells her it was real. Monsters are real. She tells him how the man threatened her. She gives Dean a name – Andy. He promises to protect her.

Dean and Sam head out to the woods, arriving at a cabin where Andy is said to live with his brother. They don’t get much from either of them. After Sam and Dean leave the brothers to get into a fight. Andy is scarred. He doesn’t want to hurt people and he is mad at his brother for killing two of the girls while he just scared Ashley. The brother says they can be done all of this after they take care of Ashley.

Ashley calls Sam and Dean. She is scared. They take her with them back to the hotel. The brothers sit outside of the hotel. They can smell her in there. Ashley asks Dean to stay with her while she falls asleep. Before she goes to bed she asks him if he likes his job. He tells her yes, he likes helping people. He is where he is supposed to be. She is lost. She graduated from college with a bad degree and now her friends are gone. She wishes things were just planned out for her, already decided.

Hours later, Sam wakes Dean. Ashley is missing. Sam just went out for food. They run to the brother’s house where she is tied up. The brothers hide while they Ashley. On their way out, the brothers surprise them. They all fight. Andy freaks out when his brother overpowers Dean. Andy shoots his brother and then himself. Sam and Dean are shocked and don’t understand. When Dean reaches to help Ashley, she falls on a pair of antlers. They pierced her right through the heart. Seconds later, she gets up annoyed. They both stare at her. She says high to Sam first, upset he doesn’t remember her. It’s Lilith!

She explains that God brought her back. He plucked her right out of the empty and now she wants the gun back, the equalizer. Dean laughs at her. If God wants it, he can come get it. When she reaches to hurt Sam, Dean tells her he will show her where the gun is. If he is lying, she can kill him. She tells him she can’t do that but she’ll torture him and make him beg to die. He calls it a deal.

Sam is dreaming again. He and Dean fight in the bunker. The Mark of Cain has returned and Dean is stronger than ever. He stabs Sam, killing him. Sam wakes. Lilith and Dean are gone. They are on the road. Dean asks her why? She tells him she has to, God (Chuck) wrote it this way. She can’t hurt him so she is going to mess with Dean and Sam. She talks about how Sam and Dean are going to die, kind of like the werewolf brothers. That’s God’s kind of ending.

At the hotel, Dean tells Lilith that he forgot the gone. She cuts him with a spell on both sides of his face. Sam breaks in. He shoots her in between the eyes with the gun. She is frozen on the spot but quickly fights the devil’s trap. They run for it. She freezes them on the spot. Judging by their actions and how they left the room without grabbing anything, the gun has to be somewhere. She finds it in the glove box of the Impala and melts it into nothing. Laughing, she says her goodbyes.

Back at the bunker. The boys share a beer while trying to call Cas to give him a heads up on Lilith. Dean tells him about how Chuck wants the ending of their story to go. Sam admits he has been having all kinds of dreams about how they kill each other. Maybe they are all Chuck’s possible endings? Maybe he is linked to Chuck? Dean is distraught. Sam, on the other hand, thinks they need to fight God. Dean wants to know how?