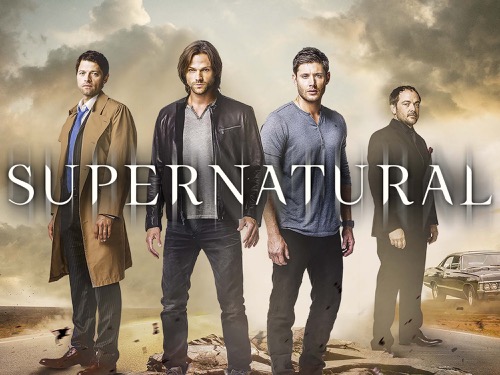 Supernatural airs tonight on the CW with an all new Thursday, January 17, season 14 episode 10 Winter Premiere called “Nihilism,” and we have your Supernatural recap below. On tonight’s Supernatural episode as per the CW synopsis, “Michael has re-taken control of Dean as his army of monsters continues to move in on the heroes. Sam devises a plan to try and reach Dean and stop Michael before anyone else has to die..”

Dean is behind the bar at Rocky’s. There is a storm outside. Pamela shows up with the limes. They share a drink. A businesswoman comes in. She wants to buy the bar from Dean. He isn’t selling even of the place isn’t doing well. She leaves in a huff. The storm rages on outside as Dean does paperwork. Pamela has more shots for them. They toast. A vamp comes in the door. He has a score to settle with Dean. Dean and Pamela fight him and his friends.

Michael has taken over Dean’s body. They are in the office. He tortures Cas, Sam, and Jack but they manage to cuff him. They try to talk to Dean but he isn’t coming to the surface. They get ready to bring Michael cuffed back to the bunker. They need to make their way out of there and past Michael’s army of monsters. Sam calls out for the reaper that watches over him and Dean. Another one comes. They work in shifts now. She tells him she cannot intervene. Suddenly they are back in the bunker but she didn’t make that happen. They are all confused.

At the bunker, Sam, Cas, and Jack try to figure out how to drive Michael from Dean’s body. Maggie calls. The monsters have stopped attacking people. They are on the move, heading to the bunker. Michael tells them that either way he is getting out. Tonight, everybody dies, he tells them.

Dean and Pamela are back at it, enjoying shots and cutting limes. The businesswoman shows up again with papers. They kill the vamps and time continues in a loop. Dean tells Pam he feels some serious deja vu.

Michael tells Jack that he is in Dean’s head and has everything under control. He tells Jack that Dean really didn’t care when he died, he was just pretending. Cas interrupts and tells Jack not to believe him.

Maggie and the other hunters all wait for the monsters. They cannot let them get back to the bunker.

Michael goes on a rant about how God did nothing and told them nothing. But now he can even die.

Cas and Sam visit the empty so that Cas can hear what is going on. He hears a lot of trauma. Dean is strong, Cas tells Sam.

At Rocky’s, Cas and Sam stand in front of Dean confused as he pours them a beer. Sam tells Dean and Pam that none of this is real. Cas thinks this is all a distraction in Dean’s mind. Sam tells him about Michael and how all of this is a set-up. The vamps come in and the loop continues. Sam picks up on this and tells Dean that none of this is real. Pamela was blinded and then killed by a demon. She disappears from the bar. Dean fights them. This is his life until Sam says one word “Poughkeepsie.” Dean remembers. Michael shows up clapping. He tells them what he sees in Dean’s head. He tolerates Cas and he really liked when Sam quit hunting and it was just him and his dad. Cas calls Michael out – he is stalling.

Back at the bunker, Maggie and the others arrive. The monsters are coming. Michael, Cas, and Sam all sit in a trance while Jack tells her they are trying to help Dean. Meanwhile, the guys call Michael. He can’t do anything right now. That’s why he is wasting time. They all fight and attempt to take out Michael but he takes them down one by one.

Inside the bunker, the hunters realize one of their own has been turned. He didn’t lock the door. All of the monsters come in. They all fight. Jack uses his powers to disintegrate the monsters.

The guys all get up off the floor. They come up with another quick plan, throwing Michael in the bar’s walk-in fridge. Its Dean’s reality, his rules. He is the cage and Michael cannot get out, pounding on the door from the inside.

Sam is back in the bunker. Maggie tells him how all the monsters took off. Michael cannot control them. He thanks her. She tells him it was all Jack. Meanwhile, Cas tells Jack that he cannot do what he did anymore. It could kill him.

Dean is in his room in the mirror. He hears banging and screaming from Michael in his head. He tells himself over and over – it’s all you. Billie the reaper shows up. He tells her Michael is all locked up. She has already warned him about jumping worlds and now the library she brought him to before that tells all the ways he could die has been rewritten. They all say the same thing about how Michael escapes his mind and burns down the city. All except one. She hands him the different version. He peers at it somewhat scared and confused.