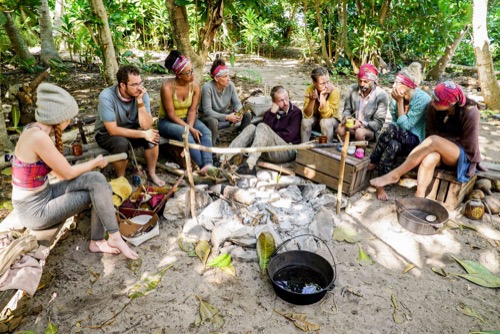 Tonight on CBS Survivor: Edge of Extinction airs with an all-new Wednesday, April 3, 2019, Season 38 Episode 8 and we have your Survivor recap below. On tonight’s Survivor season, 38 episode 8 called “I’m the Puppet Master,” as per the CBS synopsis, “The puppet master attempts to pull the strings on other castaways, and one castaway struggles to find balance at an immunity challenge after exhaustion takes its toll.”

After a crazy Tribal Council, it is time for a challenge. For today’s challenge, they are going to race through a series of obstacles, retrieve a bag of puzzle pieces, then race to the finish, THey will then use them to solve a plank puzzle. First six to finish wins reward, Chinese takeout, loses nothing.

Aurora, Eric, Devens, Wardog, Julie, and Victoria won! Ron is thrilled that Lauren and Wentworth to lose, he wants them weak, he considers himself the puppet master and he wants to break them down.

Lauren is so hungry, she feels like she is cursed. Wentworth feels like she is on the bottom and tries to warm up to David to see where he is at. If the Lesu five stick together, they can get one of the Kama people out. David is excited with what Wentworth is proposing. They need to band together and flip this game on its head. Wardog goes to Rick to try and get him to work with them, he doesn’t want to. David goes to speak to Rick and tells him that they are both puppets in this game, Eric and Ron are driving the game, they need to navigate their own ships. Rick is letting emotions run his game, he asks David for the idol, he says no.

Chris comes back from the beach with all these wine bottles, they have a note “Its been rocky thus far but your game still at stake, step back… and assess.. an advantage awaits.” Aubry already got her shoes on, she knows that something is coming and she has to be ready for it. Everybody heads out to the rocky part of the island and starts searching. Aubry takes a step back and looks while everyone is searching, she sees a hole in the wall, heads over there and she finds a key wrapped up with a clue that reads, follows the rocks to where your practice begins. Aubry finds a practice advantage and an extra vote for someone in the game. Not only does she get to practice to get back in the game, but she has to decide who to give that extra vote to.

Time for the Immunity Challenge. For today’s challenge, they are going to balance on their toes, with a block wedged on the top of their head and the frame. The longer the challenge goes, the more fatigued they will become. The last person standing will win immunity. Wardog is the first one out in 25 seconds. Eric is out and one after the other, they keep dropping. Twenty-five minutes in, David, Victoria, Lauren and Aurora still fighting for immunity. Lauren blacks out, medic comes and she is going to be ok. While Lauren is passed out, Aurora tries to talk game with Victoria. Out of nowhere, Victoria drops and Aurora wins immunity.

Aurora gets the extra vote from Aubry and can’t believe her luck.

Ron and Eric are running the game, but Lauren and Kelley know they are on the chopping block and will probably play their idols. Wardog thinks Ron and Eric are trying to pull in David and Devins to build their final four and get rid of everyone else. Julia thinks Wardog just might be right and she tests Eric by trying to push a David or Devens vote to see who is working with who. Wardog is right, they are going to use David and Devens to get rid of the other Kama members down the road.

Time for Tribal Council, first the members of the jury come out. Ron says that they are Kama seven that have made their decision on who to vote out tonight. Devens says that Lesu threw him out, he is on the Kama train. Julia says that everyone is thinking about make a move, but they are wavering on when to do it. Ron says they have limited spaces open on the Kama tribe right now. Aurora says there is a lot of talk about how the strong Kama is, but they are not, it is just a matter of who is going to decide to take control of this game.

Time to vote. Nobody plays their idol. First vote, Kelley, then Lauren, Lauren again, Kelley, Eric, Eric, Eric, Eric, Eric; the eighth person voted out, Eric. The look on Devens’ face is hilarious, he is obviously stunned. Eric decides to head to Edge of Extinction.