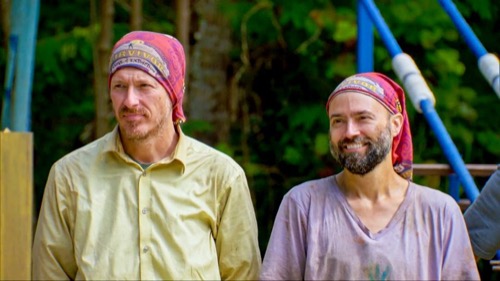 Tonight on CBS Survivor: Edge of Extinction airs with an all-new Wednesday, April 17, 2019, Season 38 Episode 10 and we have your Survivor recap below. On tonight’s Survivor season, 38 episode 10 called “Blood of a Blindside,” as per the CBS synopsis, “Two tribal councils in one hour, and a surprise advantage may pay off for one castaway’s game.”

Tonight’s episode of survivor opens with the castaways getting back from tribal council.  David talks about how tribal council went crazy after Aurora spoke.  David talks about using is an idol and he didn’t need it so it was a wasted idol, but he does not care but it was complete chaos.  The rest of the castaways spoke about how Aurora blew everything up.  Wardog speaks about how he wants to set up a six-person alliance and then once they get down to six it is everyman’s game.

Meanwhile, Aurora is upset she feels she put her foot in her mouth and she may have ruined her game.  She notices everyone is walking in groups and not asking her.

Immunity Challenge – You have a bar resting on their shoulders it will force everyone into an uncomfortable position.  If the castaway goes too low their flag pops and if they go too high their urn drops. Jeff offers them if they are comfortable they can sit out and eat a mountain of pizza and beer.  Wentworth, Lorne, Victoria, and Ron have decided to sit out and eat.

First out is Wardog, then Gavin, then Julie, three are left after 10-minutes.  Devon drops out and we are down to two Aurora and David.  Finally, David cannot do it anymore and he drops.  Aurora wins her second immunity idol, she is safe tonight.

Julie is upset she wanted Aurora to go tonight, she says she, “does not know what she is going to do tonight.”

Day 25 the castaways get back to camp and they congratulate Aurora on a great win.  Kelly is frustrated she wanted her gone.  Kelly says the group of six are strong and they decide that they are going to vote out David.  Gavin feels he is a great threat.  Wardog is good with it but cautious because there have been so many blindsides this season.

David and Devon feel they are going to go home tonight.  So they decided they have to fight.  David wants Wardog gone.  Devon talks to Victoria and she thinks to get Wardog out is a good plan.  David speaks to Aurora and tells her they should get one of the Power Trio out.  David talks to Victoria about who she and Ron are voting off.  Victoria is not sure about the final 6 she is in.  She is not comfortable that Wardog wants to make the decision who goes home.

Ron is unsure what he wants to do he thinks Wardog is good and could win but he also is uncomfortable working with David because he thinks he is sneaky.  Julie is expecting fireworks at tribal council tonight.

Tribal Council – Jeff talks about how crazy last week’s immunity challenge was.  Devon tells Jeff he and David feel like they are in trouble.  Julie says last week she feels like she was a passenger on someone else’s plane but this week she feels better.  Wardog speaks about the Power trio and how they all voted together.  Devon says he thinks the Power Trio always vote together and he is shocked people don’t see it.

David says his brand is loyalty and everyone laughs and argues.  Wardog says David always squirms and is a good talker and that is the reason he has to go.  David says he is wondering, “how far the ship has to sink before the rest of realizes we are drowning.”

David’s first morning on Edge of Extinction Island and Joe walks in with 7 bottles with 7 clues.  They receive a clue to an advantage.  David takes off to look and so do the rest of the people.  Eric has an idea where it could be.  He is wrong.  Everyone is searching David thinks it has to be in the rocks and he finds it under a rock.  David’s advantage also him to help someone else in the game.  David is excited.

Days 27 – Another immunity challenge, the castaways have to balance a paddle on a stand and roll a ball down the paddle and get the ball in a dimple.  The first person who gets all 5 balls in the dimples wins immunity.  Devon interrupts and tells Jeff he has an advantage from David.  Jeff tells him unlike everyone else he only has to land 4 balls instead of 5.  Devon is in the lead with 2 balls done. Ron and Aurora get 2.  Devon has 3 balls.  Aurora has 3 balls.  Ron has 3 balls.  Devon lands his fourth ball and he wins individual immunity.  Devon cannot be voted out tonight.

Julie feels Aurora should go tonight.  Devon is thrilled he has immunity because there are too many blindsides.  Wardog wants the group of six to vote Kelley Wentworth out.  Wardog talks to Devon and Aurora to get them to help blindside Kelley Wentworth.  Wardog talks to Ron and tells him Kelley is the biggest threat she is a returning and it is a good story for the end.  Ron is shocked and thinks Julie will be furious.

Aurora has an extra vote and knows she may go tonight if Wardog is lying.  Aurora goes to Ron and gives him her extra vote.  She makes him agree to give it back to her if she is not voted out. Ron considers betraying her, voting her out and keeping the advantage for herself.

Tribal Council: Jeff asks with all the craziness how does anyone know if they are going to be blindsided.  Ron says once people taste the blood of the blindside they want more.  He says that is why they tried to form a group.  Kelley says a blindside is not always the right decision, Wardog agrees.  Victoria says they have to start thinking about who they want to sit with at the end of the game.  Jeff says it is unusual there has been one idol and one advantage played and they were both played by Devon.