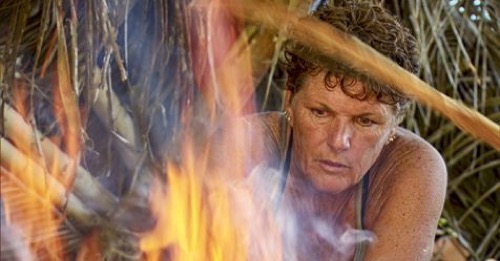 Tonight on CBS Survivor airs with an all-new Wednesday, December 11, 2019, Season 39 episode 12 and we have your Survivor recap below. On tonight’s Survivor season, 39 episode 12 called “Just Go For It,” as per the CBS synopsis, “The fourteenth castaway is voted out and joins the jury, on the penultimate episode of the season.”

Tommy is angry about what went down at the meeting. Nora is apologizing while sharing that Dean went crazy. Nora takes Dean’s prized sneakers and hides them up high on the sign. Meanwhile, Elaine is searching for an idol. The next morning, Tommy also goes on the hunt as well as Janet and Dean. Janet has found the idol! She shows Tommy. Dean and Elaine spot the two from a distance reading something. Dean thinks they found the idol.

Elaine gets into Lauren’s head by sharing that the guys are working on a final 3 all guy alliance. Lauren talks to Tommy, who lies to her and tells her he is in alliance with her.

A boat arrives, Dean is chosen to the Island of the Idols. He arrives to meet Rob and Sandra. They eat fish and talk about the game. Dean shows them what they believe is a fake legacy advantage. They talk to him about jury management. They also offer him a game of chance, a coin flip. If he wins he gets an idol nullifier if not he loses his vote. He wins the nullifier.

Dean is sent back to the island. He tells everybody he lost the coin flip. Later, he tells Tommy, Lauren, and Dan. Tommy believes Dean is more of a player than he thought. He starts to think he is a threat and needs to go.

It is competition time. The gang must run through a brief obstacle course with a beam before solving a puzzle. Elaine almost had it but Dean beats her. She gets mad.

Elaine is annoyed so she goes for a swim. Tommy talks to his alliance about Elaine. She is a threat. Meanwhile, Lauren is starting to worry that she is a threat and they will get rid of her. Lauren tells Elaine about her feelings again. They discuss getting rid of Nora.

They all sit. Elaine makes it know she is annoyed with Dean. She had the puzzle figured out and he won. She also knows she is target number one because she is a threat. They all go back and forth about who is the real threat. Lauren whispers to Janet, who then tells the group she and Elaine very are similar. She also feels like she is a target because she is seen as a threat. Elaine starts to cry which makes Lauren cry. The ladies all hug. Elaine talks about the lessons she has learned, her hardships and her journey. She is going to keep fighting. Janet tells Elaine she will find her way no matter what in her personal life.

It is time to vote. Nora goes first followed by the rest of the gang. Jeff tallies the votes. It’s between Elaine and Nora until the last vote. Elaine is out. She puts out her torch before hugging Jeff goodbye. They all head to bed.

Jeff shows up to share some news in the morning. Dan will not be returning to the game. He has been removed from the game due to an incident that happened off camera that didn’t involve another player. They are all shocked but know they need to go on.