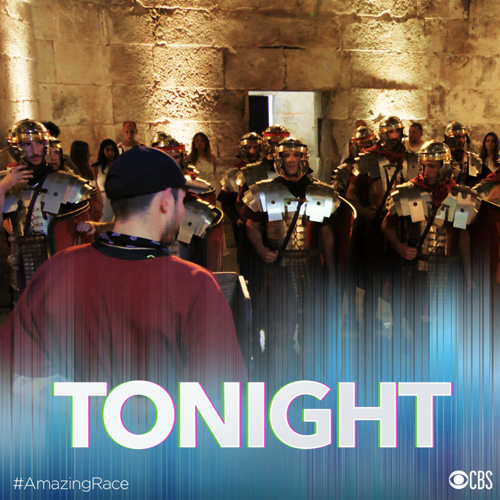 Teams must fly southeast from Brienz, Switzerland to Split, Croatia; Tyler & Korey are the first team to depart. Founded by the Romans, Split is home to the oldest Catholic cathedral in the world, Saint Domnius. Once they land, teams must make their way to Kasjuni Beach, a popular place in Split and meet up with their traveling companion for this leg of the race, their Travelocity gnome.

Tyler & Korey are coming off their third first place in a row. Chris & Bret hope they catch up, if Tyler & Korey make a mistake, they believe they will come in first place. Tyler & Korey, Chris & Bret, are on the first train to the Zurich airport – they all get on the same flight, and the very last seats. The first plane is going to arrive one hour before the second. Nicole & Victor hit a dead end, all the flights taken by the other contestants are fully booked.

The first flight leaves and arrives in Berlin at 11:20 am. The second flight leaves and is scheduled to arrive at 11:30 am; Nicole & Victor get a break, they are on standby and get on that plane. Everyone else is on the third flight, arriving at 12:25 am.

Chris & Bret, Tyler & Korey have landed and head to the beach. They find Caffee Bar Zbirac for their next clue. Teams must serve six filled to the brim glasses of punch to sunbathers on the beach. This is where they will meet up with their travel companion for this leg of the race. Once they empty their serving trays, they will return them to the bartender and get their next clue.

Teams will pick up their Detour clue at the Marjan Cave Church and help their Travelocity gnome deliver a piece of bread to a monk to get their next clue. Chris & Bret are currently in the first place. Meanwhile, Nicole & Victor have landed and can’t believe they are in third place. The teams on the third flight are delayed and will be an extra hour than anticipated before landing.

For this Detour, teams must choose between Poetry in Motion where they will race on a flying tube and not have any time to enjoy it, because they will have to memorize a tongue-twisting poem, and if they get it wrong, they will have to go again. In Washed In From The Ocean, teams will have a chance to snorkel underwater treasure hunters; they have to find a goblet and find gold coins. Chris & Bret choose to snorkel because they have snorkeled before on Survivor. Tyler & Korey arrive to give the snorkeling a go while Nicole & Victor are trying the poem; they learn quickly that they have to hold on tight or they will be thrown into the water; they don’t make it the first try.

Tyler & Korey decide to switch detours. The third plane has finally landed, teams are on the beach serving drinks. Nicole & Victor finish their poem, are in the first place and get their next clue; they must head to the catacomb entrance at Diocletian’s Palace on the riverside and search for their next clue. Tyler & Korey are in second place, finished their poem and Chris & Bret are giving up and changing detours; they do the poem once, then head back to the snorkeling again.

Nicole & Victor get their next clue, it is a RoadBlock, “Who’s Ready To Get Their Marching Orders?” They have to keep on eye on some Roman soldiers who have red bands around their helmets, there are actually 18 soldiers and they have to keep their eye on five of them. It’s almost like playing shells and the soldiers are instead hidden by their shields. Nicole & Victor, Tyler & Korey decide to team up and play together. It’s different every time, so if they get it wrong, it is always a new rotation. It doesn’t take long for both teams to get their next clues. Teams must now head to the Pit Stop at Matejuska at Split Harbor.

Chris & Bret are back to the poem and trying yet again; they arrived in first place and they are now in last place. Meanwhile, Colin & Christie forgot their gnome and have to head back after finishing the poem.

Leo & Jamal, Colin & Christie work together and finish as teams number four and five at the Pit Stop.

Chris & Bret are the last team to arrive and have been eliminated from the race.