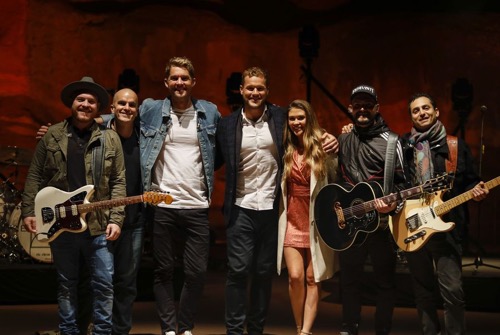 The Bachelor 2019 airs on ABC this evening with an all-new Monday, February 18, 2019, season 23 episode 7 and we have your The Bachelor recap below. On tonight’s The Bachelor season 23 episode 7 as per the ABC synopsis, “The pressure mounts as Colton and the seven remaining women return to the U.S. and his hometown of Denver. He meets with popular Bachelor Ben Higgins for his advice, sharing his fear of being blindsided by a bachelorette who is not as serious as he is.

Tayshia and Colton escape to explore Denver, and she shares earthshattering news that shakes his world. Caelynn meets Colton on the ski slopes, and country music star Brett Young builds the romance with a surprise concert for the couple.”

More than one woman has tried to warn Colton. He’s been warned that their women still in the competition that wasn’t ready for a relationship with him much less an engagement. Colton heard all of this from the beginning, but he ignored it because he thought he was getting a feel of the girls as well as their motives. He thought everyone that was still around was there because he had a connection with them that was worth pursuing. Colton would have cut his losses if he thought they weren’t being honest with him and so he wanted to use their trip to his hometown in Denver to clear up the confusion.

Colton had the choice of spending one on one time with someone and he chose it to spend it with Tayshia. Tayshia seemed to be genuinely into him and that was one in her favor. She was also really honest. Tayshia had an idea about who this person that was sticking around for no good reason and so she talked about it with Colton. Colton said he needed all the information he could find because he was falling in love with people and he wanted it to mean something. So he asked Tayshia about it and the first thing she said was that she heard conversations around the house. She didn’t want to be tattletale but she’s heard women discussing whether they’ll be the next Bachelorette.

With the ladies saying crap like that, they weren’t serious about Colton and were just in it for the television fame. Tayshia named names and she told Colton what she heard. He hadn’t liked it because he truly hoped the rumors had been merely that through finding out the truth had helped and plus he needed the distraction that Tayshia offered. They loved spending time together and she’s proven she’s loyal. Tayshia became the best bet for someone like Colton and so he wanted to learn more about her. He asked her about her family and learned how protective her father could be.

Tayshia said it would be hard for her father to let go, but Colton would need a father’s blessing before he ever proposed to a woman and so her father might prove to be a roadblock except Colton believed he could win the other man over. He was bound to be asked a lot of questions and Tayshia warned him that her dad was going to put him to test to see if they fit. Only Colton wasn’t afraid. He said he was falling in love with Tayshia and that he was willing to fight for her. And so Tayshia’s honesty came in handy for her date with Colton because he now trusts her word while there were others he was now side-eyeing.

Colton chose Caelynn for his next date and it wasn’t for reasons that she thought. She thought Colton was getting serious about her and it wasn’t that. Colton had questions to ask about what Tayshia told him. He was told that Caelynn discussed being the next Bachelorette with Cassie and that neither of them said they wanted to get married anytime soon, but that had come as a shock to Colton because he thought he and Caelynn had taken a huge step in their relationship when they were back in Singapore. They had both opened themselves and had been truly vulnerable with each other.

Colton was hoping that there was more to the story and so he was upfront about what he had been told. He mentioned to Caelynn that he had doubts about her sincerity. She had tried to defend herself and said that she had never talked about the Bachelorette or suggested that she might be the next one after this season, but there was no middle ground between her story and Tayshia’s. He either had to believe Tayshia or Caelynn and both women were making it hard for him. Tayshia was convincing and it didn’t seem like her to lie about something so important. And then again Caelynn defended herself by saying she couldn’t wait to get married and that she wasn’t playing with his feelings.

Colton was left not knowing who to believe. He more or less made his decision on feeling and he couldn’t quite dismiss the feelings he had for Caelynn. Caelynn received a rose at the end of her date and Colton even through in a surprise concert by Brett Young. So while he didn’t know it, he made his choice. He had already given a rose to Tayshia and with Caelynn also receiving one he was down two. Colton next asked Hannah B. to a one on one. He wanted to see if she was in it for the right reasons and so his doubts were starting to get to him. He wasn’t in the best of mood when he went on a date with Hannah.

Back at the house, Caelynn confronted Tayshia. She wanted to know why Tayshia said the things she did and it turns out Tayshia hadn’t even been sure that it had been Caelynn that said something. She said she heard the rumors and that everyone pretty much thought it was either Cassie that said them or Caelynn. Caelynn called out Tayshia was using rumors to try and ruin things for her except Tayshia wasn’t embarrassed. She said Caelynn would have done the same if she was in her place and Carlynn denied that she would. She said she never would have done that to another girl and so she called Tayshia’s actions “low”.

Colton was so fixated on who could be playing him that he sort of let it ruin his date with Hannah. Hannah received the rare chance of meeting Colton’s parents and even spending time with them. They had really liked her and the only one that hadn’t been in a great mood was Colton. Colton talked about what was happening behind the scenes with his family and it seems he chose to bring Hannah along to his parents’ home because he knew he could trust her, but not because he’s falling in love with her and so there weird silences. Moments in which Hannah asked what was wrong and Colton wouldn’t say. And that night, he didn’t give her a rose.

Hannah had been confused. She thought that Colton taking Hannah to meet his parents was led to all the confusion because she thought it was one step forward for them, but he wasn’t serious and he didn’t want to meet her family when he knew he wasn’t serious about her. Hannah went home that night and it had shocked the rest of the house. None of them knew what Colton was thinking or he could do next and so the girls that hadn’t gotten the chance to go on a one on one had tried to make the best impressions in the group date. And the one person that went to Colton with doubts was Heather.

Heather wasn’t sure of the relationship had with Colton. She’s been having her doubts and Colton never took the time to reassure her. So Heather thought it best to leave. She left at the start of the group date and so it wasn’t long before the other girls realized. They knew that Heather wasn’t getting the signals she wanted and that’s she was feeling lost in developing a relationship with Colton. Therefore, it wasn’t surprising that Heather went home because her heart wasn’t in it. The others had all claimed that they wanted to be with Colton and perhaps even marry him yet he still had his doubts and so he continued to question everyone.

He talked to Cassie. She said she wanted to be with him and that she was serious about the relationship, but then right afterward Colton spent time with Kirpa. Kirpa hadn’t waited to be asked. She offered up her own two cents and told Colton all about who she suspects including why. Kripa explained how she heard the rumors and how she began suspecting Cassie and Caelynn because after Colton’s big speech it had been them that were freaking out. She said why would anyone be worried about Colton second-guessing their motives? Either they were innocent or they had something to hide.

Again, Colton was put in the position where he didn’t know who to trust and so he left it the final rose up in the air between Kirpa and Cassie.

He was about to make a decision when Caelynn came to speak to him about how he shouldn’t let rumors control who he gave the last rose to and so he took her advice over everyone else’s.