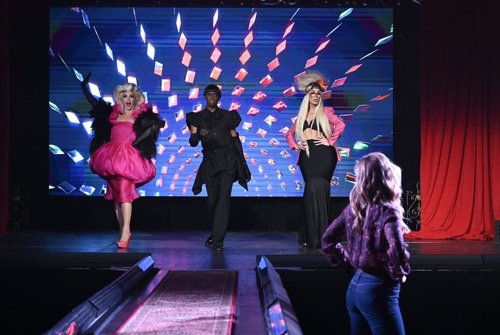 The Bachelorette Season 15 Episode 2 airs on ABC this evening with an all-new Monday, May 20, 2019, season 15 episode 2 and we have your weekly The Bachelorette recap below. On tonight’s season 15 episode 2 as per the ABC synopsis, “Hannah’s search for love is anything but a drag when world-famous drag queens Alaska and Alyssa Edwards, and renowned runway coach Miss J. Alexander (“America’s Next Top Model”), host a pageant for eight hopeful bachelors vying for the coveted title of the Bachelorette’s Mr. Right.

The stakes are high when one bachelor must overcome his fears and race through the mud on a one-on-one date, while eight others gear up for a hazardous roller derby competition hosted by legendary comedic actor Fred Willard and Chris Harrison.”

Hannah B. is ready for her first date. Jonathan is also ready, for a beautiful love story and he and Hannah are front and center of it. Cam is ready for a new day with Hannah. Luke P already sees himself marrying Hannah and having a family with her.

Chris asks the guys how they are feeling. Luke P says he is really confident because he got the first impression rose. The first date card is for Grant, Luke S., Mike, Jed, Jonathan, John Paul Jones, Dylan, Luke P. – she is looking for her Mr. Right. Hannah brings the men into her world for this date with world-famous drag queens Alaska and Alyssa Edwards, and renowned runway coach Miss J. Alexander as they host a pageant for Mr. Right.

The men have to wear Speedos and perform in front of an audience. Hannah is not looking for talent, she is looking for personality and for the men to show up.

It is time for the competition. The men have their Speedos on and a robe, Hannah is looking forward to seeing them strut their stuff.

The men really do a good job. Hannah is really enjoying themselves. Chris gives the judges 20 seconds to calm down. John Paul Jones says that Luke P. has the body of a Greek God. Time for the talent competition. John Paul Jones rides a unicycle, Mike comes out in heels, Jed sings a song; can’t do better than that, Luke P. gets up and tells Hannah that he is genuinely starting to fall in love with her, seals it with a kiss.

The winner is announced, Mr. Right is Luke P.

Time for the cocktail party after the date, Hannah cheers with all the men. Luke S. can’t believe that Luke P. said he was falling in love with Hannah. Mike makes a toast to keeping it real and not about getting your 15 minutes. Luke P. than takes Hannah away from the group; they are left to talk about what he said earlier in the day, most think it is foolish.

Luke P. asks Hannah how she is handling what he said. She says that she barely knows him 48 hours, how can he know he is falling in love with her, it scares her. Words are so important to her, she wants him to be very sure before he says something. Luke P. says his feelings for her started before he even met her, he is starting to fall in love with her and was scared to tell her because he can’t hide it. She says she asked for bold, and he is bold. Luke P. leans in for a kiss. Hannah believes what he said, it makes her feels excited. He is saying everything her heart needs him to say.

Mike calls Luke P. a dog, says he doesn’t want her to be frazzled because he is making this up, in the history of man, someone hasn’t fallen in love after spent 2 hours together. Luke P. says it is in his personality if he wants something, he is going to fight for it and do whatever it takes to get what he wants.

Back at the mansion, the doorbell rings, its another date card. This one is for Tyler G – falling in love can be messy.

Hannah is sitting with Jed and tells him that she loves his southern charm, it is super attractive, and she loved his singing. Jed leans in and kisses her.

Hannah liked Jed because he calms her, Luke P. on that other hand makes her feel excited.

Hannah decides to give her one rose tonight to Jed – he says it is the best feeling in the world. Luke P. doesn’t seem thrilled, not surprised. Its time for Hannah’s first one on one date, this one is with Tyler G. A helicopter arrives to pick them up, Tyler G. says he feels like the luckiest guy in the world.

At the mansion, Jed sings a rap guy to the guys.

The helicopters land in the green area, they get out and both get on four wheelers. Hannah is dressed in white; they are both full of mud. They stop to rest and enjoy some wine together. They talk, Hannah talks about her experience with Colton. He said he is going to do his best to be real with her, he knows it is their first date, but he feels like the luckiest guy in the world.

Time for dinner, Hannah is really excited to see how the two progress. She tells him that he impressed her a lot when he got out of the limo, it was natural and a really good start to this journey. He says he is not worried about being vulnerable or being cool, because that doesn’t matter. Life is to short, people just need to be genuine. He asks her what she is wanting to do in her life. She says she always wanted to have a family and be a mom, have her own career where she can help people. Hannah gives a rose to Tyler G., they seal it with a kiss. He is so happy, he thinks Hannah is everything you would want in a woman. Hannah had a blast, she felt truly free with Tyler G.

It’s a roller derby race for this group date. The men have to get dressed in roller skates and safety gear before they head on the track. Hannah is a little nervous, the last time she was on skates, she broke her arm. One after the other, the men hit the ground; they all suck.

At the mansion, Cam is feeling really disappointed because he wasn’t asked to go on either of the dates. He knows he has to be bold if he is going to get some time with Hannah.

Time for The Bachelorette Derby Dudes Derby. The men are separated into two teams; green and orange. The men continue to fall, Hannah runs out of the way so she doesn’t get run over. Dustin gets injured, he came for love and is leaving with an injured ankle. Fred Willard and Chris H. are the judges, the champions of this derby are the green team.

Time for the cocktail party of the derby. Hannah takes Dustin aside to see how he is feeling, he is doing well after the injury, just a little sore. They kiss, Dustin is thrilled; he is a shy quiet guy, and he is on cloud nine.

Its a big night for all the guys, Hannah moves around from man to man, and they are all thrilled.

Cam arrives in a limo, he was invited but decides to do something bold. Cam arrives with flowers, interrupts Hannah talking to one of the men, she apologizes to him. Not sure if she is going to be happy about this. The other guys think Cam showing up is not cool, it is a lack of respect for the other guys. They think Cam’s actions make him look like a stalker. Hannah politely tells Cam that it is a good surprise, but I think she is just being polite. Cam is thrilled at the outcome, he thinks Hannah is looking for a man that comes out of his comfort zone, and he did.

Todd has words with Cam, tells him that he shouldn’t have done what he did. Kevin lost a lot of respect for Cam, because of him, he did not have any alone time with Hannah.

Hannah gives the group date rose to Dustin because she asked for someone to get back up if they fall and he did that literally.

Time for the cocktail party, Hannah wants to speak to the men and she starts crying. She tells them that she has asked them to be real, so she is going to be real. She says that she had a great week with them and it has been really special, but it is also scary – it is hard to make a decision when she doesn’t know them all as much as she wants to. Love can be messy, but also something that you just roll with.

Kevin is spending alone time with Hannah and Cam walks up, says he has something planned for the three of them. They walk to these cushions with roses on the ground, Cam has nuggets to share with Hannah and asks Kevin to clear up when they are done. Kevin is furious when the guys head back to the mansion, Kevin throws Cam’s nuggets on the floor in front of him.

Tyler C. has an opportunity to spend time with Hannah, he tells her that he gave her amazing butterflies when he first met her, in fact, he continues to feel butterflies every time he spends time with her. Hannah says she loves the way he looks at her.

Jed feels super confident because he has a rose; but he wants the other men to also have their chances to spend time with her. Luke P. is alone with Hannah, he tells her that he is really good with his hands and if ever he wants a massage, he is in. The two start kissing, she thinks he is so hot and it so easy to get caught up in him. Hannah makes him take off his shirt, and Jed walks in. Hannah feels awkward, she doesn’t know what to do. Luke P. tells her it is his fault.

Hannah searches out Jed and apologizes to him. She tells him that it looked way more than it was with Luke P.

Matthew, Connor J., and Daron are heading home and have lost their chance to win Hannah’s heart.