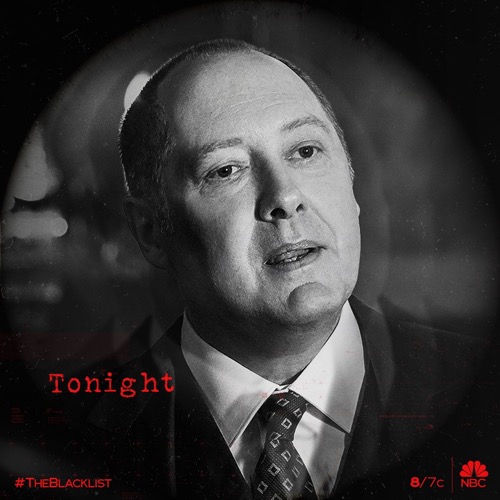 Meanwhile, Katarina delves into the memories of an old friend in order to get additional information about the Townsend Directive. Laila Robins, Laura Sohn and Brett Cullen guest star.”

Katarina still has her hostage, Red visits Liz with Dembe. When they sit down Red tells Liz that he can’t believe that Katarina got ahead of him, she has a dear friend of his, and she got to Steinhill. And, his friend has information, and Katarina will do anything to get it. Red goes on to say that they have a lead, Orion Relocation Services, she paid them to get a brand new identity, a home, a new life; he doesn’t know where she is or who she is pretending to be. Red says the man she took is like a brother to him. Liz says she has gone after the people he cares about, she can go after them too.

Liz updates the task force about Orion Relocation Services, they not only give people new id’s, but they also kill people and give them their id’s. Liz says there is a thief looking for a new identity, Sophia Burke, her partner took the fall when they tried to steal the Dresden green; the world’s largest green diamond – he is awaiting trial.

Aram gives Liz an envelope that came for her through the Hoover building; inside there is a USB drive. The drive contains a video of the birthday party in the park from when Agnes said she saw a dead body.

Back to Katarina and her hostage, Ilya – he is being injected with some kind of drug while he is being hypnotized, sent back to 1991.

Liz watched the video, but unfortunately, the quality isn’t good enough to do facial recognition, but she circulated the video to every FBI office worldwide.

We see Burke, she cuts her hair short and liquidates all her investments, getting ready to vanish and assume a new identity.

Red and Liz attend a dinner to meet up with a man who may know where Burke is. Little did Red and Liz know, this is a dining event in the dark, the lights go out.

Ilya is back in 1991, he sees himself with Katarina when they were much younger; he says he is relieved, he thought she was gone. She was in trouble, she needed help, she was being hunted by the KGB. Her father helped them get out of Russia, but it wasn’t enough, they needed a plan. He suggested to her to becoming Reddington, purposely stepping into the shoes of a trader – steal the money and disappear. The plan involved himself, Katarina, Dr. Core, and the man who impersonated Reddington. Katarina pushes hard to find out who impersonated Red, Ilya’s blood pressure is going through the roof.

Red and Liz are at their dinner, they start talking about Bourke with their lead; offer a finder’s fee to locate her. The chef hosting the dinner tells the guests that they are going to eat a rare owl that they are going to kill in front of them. Red switches on the lights and pulls out his gun, he refuses to see the animal killed. Red tells the chef that he is taking the owl with him.

Red and Liz are waiting for Burke at a bar, she tells Red that she will not steal the Dresden again. They sit down, Red tells her they are looking for information about Orion Relocation Services, Burke says she doesn’t know them. Red produces a briefcase with money and asks Burke how it all works. Red wants to know how to initiate contact. Her new name was to be Denise Young.

Liz gets a call, they have found the identity of one of the men at the park. It was a man named Tommy Petrov, the Russian mafia. Liz tells Red about the guy, Red says he knows him, he shot him.

Ilya is back in 1991 again, Katarina is there with him – they wanted him to call off Tommy and protect Marsha. Its early in the morning, still dark, Katarina comes out of the house – her husband wakes up, he screams at her, she tells him it’s her last job. Ilia is there to kill her, everyone is there, even Dominic. This was there last chance to get the infamous Katarina. Her husband insists to go with her, he turns on the engine to the car and it blows up. He died right before her eyes, in front of Ilya. Everything then went wrong.

The task force has a lead on Denise Young, Liz and Ressler head over there.

Katarina gets a call from Liz, who asks her if she can take care of Agnes, and there were men in the park, they were after Agnes.

Ilya is still under, he says that Red deserves to know about this. Katarina is yelling at Ilya who is shaking violently. Katarina only wants the truth, but she is risking Ilya’s life to get it and with him dead, she will get nothing.

Denise Young is packing up her things, a woman from Orion is with her and all of a sudden, a man behind her puts plastic wrap over her face and tries to kill her. Red and Dembe arrive, they hear a gunshot and go inside the house. Denise shoots the woman, it’s too late, she is dead and Red can’t get any information from her.

Liz goes to see Red and tells her they have the Orion files in the war room. She tells him to come to the war room, and they will save his friend.

There are 792 files, somewhere in there is the woman who abducted Red in Paris. Liz finds a file, it is her nanny, the woman with Agnes. Liz makes her excuses, says that her nanny has to go. Liz gets home, Agnes is in bed, Katarina is in a chair enjoying a drink. Liz goes into Agnes’room, takes out her gun, and holds it beside her. When she comes out of the room, Katarina is in the kitchen.

Katarina asks why the men would be after Agnes in the park, Liz tells her they were not after Agnes, they were after her. Liz tells her that she knows she is Katarina, a natural-born killer. Liz raises her gun, she says that part of her knew who she was; she shot her father, put her granddaughter in harm’s way. Liz raises the gun and asks her to give her reason why she shouldn’t shoot her right now, Katarina says she is her mother.