The Bold and the Beautiful Spoilers: 2 Weeks Ahead – Flo Plants a Kiss on Wyatt – Jealous Sally Must Fight for Her Man 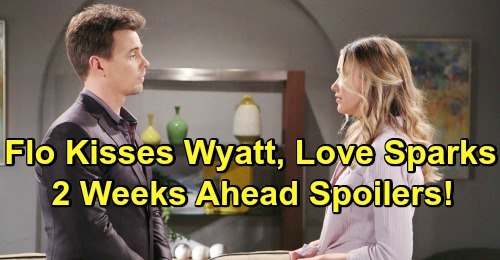 The Bold and the Beautiful (B&B) spoilers tease that Wyatt Spencer (Darin Brooks) will offer encouragement to Florence “Flo” Fulton (Katrina Bowden) this week. He’ll sense that Flo really wants to know who her father is, so he’ll give her a push in the right direction. Wyatt will just want Flo to find peace and happiness, but she’ll still be wary about her search for answers.

Nevertheless, Flo will ultimately take Wyatt’s advice. She’ll appreciate having someone in her corner, especially someone as handsome and kind as Wyatt. There’s still a spark between Wyatt and Flo, so it’ll become much harder to ignore soon. Despite Wyatt’s relationship with Sally Spectra (Courtney Hope), Flo will find it difficult to stay away.

Of course, Sally and Wyatt have been having some problems lately. After Sally decided to back out of her deal with Bill, Wyatt was definitely disappointed. He vowed to support Sally anyway, but it’s clear that their romance took a hit. Perhaps that’ll play a role in what’s about to happen between Wyatt and Flo.

During the week of April 8-12, The Bold and the Beautiful spoilers say Flo will plant a kiss on Wyatt. You could argue that Wyatt’s not to blame, but it takes two sets of lips for a full-fledged smooch. Wyatt could easily pull back and shut it down, but it doesn’t sound like he will – at least not immediately. If Wyatt lets Flo truly kiss him, he’s just as culpable here.

Wyatt may remind Flo of his girlfriend when this lip lock ends, but the damage will be done. Will a guilty Wyatt confess to Sally later? Will someone else witness this kiss and pass the news along? Whatever the case, more “Wally” drama is brewing on B&B. Let’s hope that Wyatt can resist temptation and eventually get his relationship with Sally back on track.

The Bold and the Beautiful spoilers say some exciting developments are on the way. Will Flo rev up her efforts to drive Sally and Wyatt apart? If so, Sally just might get jealous and fight for her man! We’ll give you updates as other B&B details come in. Stay tuned to the CBS soap and don’t forget to check CDL often for the latest Bold and the Beautiful spoilers, updates, and news.