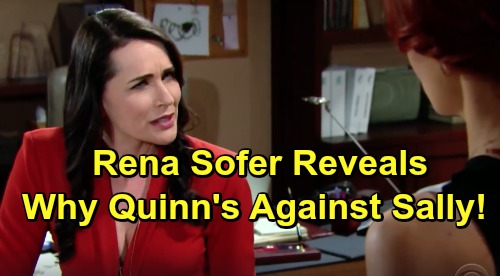 The Bold and the Beautiful (B&B) spoilers tease that Quinn Forrester (Rena Sofer) will remain convinced that Wyatt Spencer (Darin Brooks) belongs with Florence “Flo” Fulton (Katrina Bowden). She may have a bit of a scare when it comes to Flo’s father, but Bill Spencer (Don Diamont) probably won’t be the final answer. Eric Forrester (John McCook) still seems to be the most likely option.

That’ll leave a clear path to Flo and Wyatt if Quinn can get Sally Spectra (Courtney Hope) out of the way. She’ll certainly be determined to pull it off, especially once her bestie from Las Vegas arrives. Of course, we’re talking about Shauna Fulton (Denise Richards), Flo’s mother. Quinn and Shauna go way back, so they’ll catch up and be in agreement that their kids were always the ideal match.

In a recent issue of Soap Opera Digest, Rena Sofer opened up about Quinn’s thoughts on Wyatt’s love life. She assured B&B fans that Quinn has made her choice and has no intention of wavering. “Quinn loves Flo,” Sofer said. “There’s nothing about Flo that Quinn doesn’t love. Flo is perfection to her. Ironically, what Quinn sees in Sally is that they’re a lot alike.”

“Flo, to Quinn, is the be-all, end-all,” Sofer said. “Quinn truly believes that no one could make Wyatt happier, and we’ll see Quinn acting on that impulse.” Whether Flo’s father turns out to be Eric or someone else, it doesn’t seem like it’ll matter. As long as they aren’t related by blood, it sounds like Quinn will be all in on playing Cupid for Flo and Wyatt.

How far will Quinn go to bring these high school sweethearts back together? The Bold and the Beautiful spoilers say Quinn’s sneaky side will come roaring back, so stay tuned. We’ll give you updates as other B&B news comes in. Stick with the CBS soap and don’t forget to check CDL often for the latest Bold and the Beautiful spoilers, updates, and news.