The Bold and the Beautiful Spoilers: Bill Wants Katie Back – Uses Will’s Love To Recreate Family

BY hellodrdavis on February 14, 2019 | Comments: one comment
Related : Soap Opera, Spoiler, Television, The Bold and the Beautiful 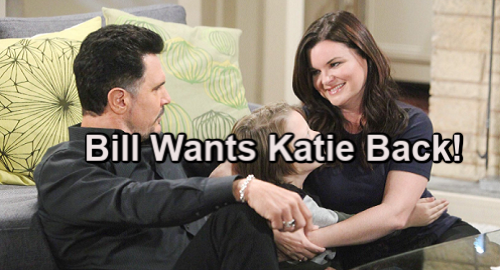 The Bold and the Beautiful (B&B) spoilers tease that Bill Spencer (Don Diamont) will soon get some very interesting news. He’ll learn from his son Wyatt Spencer (Darin Brooks) that Katie Forrester (Heather Tom) and Thorne Forrester (Ingo Rademacher) are on the rocks. After Thorne tells Katie that he doesn’t want to be married to her anymore, Katie will confide in Wyatt, who runs straight right to Bill with the news.

This piece of information will get the wheels in Bill’s head thinking.  Now, that Katie’s going to be a free woman again, Bill will probably surmise that he’ll be able to spend even more time with his son Will Spencer (Finnegan George). With Thorne out of the way as another father-figure, that will leave even more time for Bill to bond with Will.

Bill may also think that he could have a future with Katie, now that Thorne will be out of the picture. Since Bill’s obsession with Brooke Forrester (Katherine Kelly Lang) seems to have died down, he needs a new object of his attention. And, it seems that he’ll focus on getting his family back.

According to B&B spoilers, Bill will soon have a strategy session with Justin Barber (Aaron D. Spears) on how to get his family back. It doesn’t sound like he’s talking about his grown sons here; rather, it sounds like he wants to get back together with Katie and live together as a nuclear family.

Of course, that may take some time and patience on Bill’s part. Katie’s going to be hurting for a while after her split with Thorne, so Bill will need to take things slowly. But Bill does have one thing on his side…he and Katie both want what’s best for Will. If Bill plays his cards right, he can bond with Katie over Will.

Will might also have something to say about his parents’ relationship status once Thorne is gone as well. Will seems to be keen on his parents being together, so maybe they can conspire a bit to get Katie on board for a reunion.

Would you like to see Bill and Katie get back together? Stay tuned to the CBS soap and don’t forget to check CDL often for the latest Bold and the Beautiful spoilers, updates, and news.