The Bold and the Beautiful Spoilers: Thorne Shocks Katie On Valentine’s Day – Divorce News Sends Her Running To Wyatt For Comfort 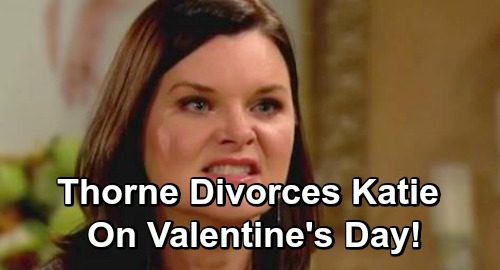 The Bold and the Beautiful spoilers tease that Katie Forrester (Heather Tom) will get a major shock. She’ll get all geared up for Valentine’s Day, and she’ll plan a romantic evening for herself and Thorne Forrester (Ingo Rademacher). She’ll want the evening to be just right and she’ll go to great pains to make sure that they’re alone and have the perfect romantic setting.

But Thorne will throw a wrench into Katie’s plans. It seems that as she’s preparing for an evening to remember, he’ll be wrestling with something big on his mind. Thorne’s been doing a lot of soul-searching lately, and he’s been keenly aware that Katie and Bill Spencer (Don Diamont) have gotten closer.

Thorne’s also been feeling like a fourth wheel lately when it comes to Katie, Bill, and Will Spencer (Finnegan George). He’s noticed just how close Will has gotten to Bill, and he may be questioning his place in the family or even his marriage to Katie.

B&B spoilers say that Thorne will drop a huge bomb on Katie on Valentine’s Day. Whatever it is, it’s sure to rock Katie to her core. Could Thorne tell Katie that he’s re-evaluated their marriage and wants a divorce? Or perhaps he’ll just need some time away to think about their marriage and what he really wants for his future.

Either way, it will leave Katie very upset, and she’ll feel that she needs some advice. She’ll probably turn to Brooke Forrester (Katherine Kelly Lang) for support, but B&B spoilers also say that she’ll turn to her old flame Wyatt Spencer (Darin Brooks). She’ll confide in Wyatt about what’s going on with Thorne.

That’s sure to be an awkward conversation, especially since Thorne actively pursued Katie while she and Wyatt were still together. But still, Katie and Wyatt will talk, and Wyatt will do his best to give good advice. It sounds like Katie will be really torn up about whatever Thorne has thrown her way.

What bomb do you think Thorne will drop on Katie? Stay tuned to the CBS soap and don’t forget to check CDL often for the latest Bold and the Beautiful spoilers, updates, and news.