The Bold and the Beautiful Spoilers: Ridge Suspicious Of Steffy’s Speedy Adoption – Catches Taylor With Loads Of Cash 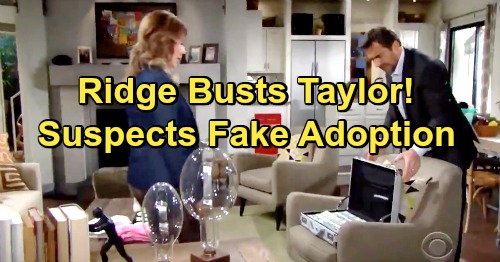 The Bold and the Beautiful spoilers tease that Ridge Forrester (Thorsten Kaye) will find himself on the receiving end of some big news – he’s going to be a grandfather again! He knew that Steffy Forrester (Jacqueline MacInnes Wood) was thinking about adoption, but as far as he knew she was just toying with the idea. He’ll be shocked when he learns not only that Steffy is definitely adopting, but that she’s already got a baby lined up.

Of course, Ridge will be overjoyed to welcome a new grandchild into the family, and he’ll be overcome with emotion when he hears the news. But he’ll naturally have some questions about the whole thing, especially about how it came about so quickly.

Adoptions generally take months or years to finalize, so Ridge will think that it all just sounds too good to be true. But Taylor Hayes (Hunter Tylo) and Steffy will explain that a “colleague” of Taylor’s happened to know of a mother who wanted to give her child up for adoption, and that things just worked out as if they were meant to be.

Of course, at this point only Taylor knows that the “colleague” in question is Reese Buckingham (Wayne Brady), the same doctor who delivered Beth Spencer on Catalina Island. Taylor promised Reese she’d leave his name out of it, so she’ll hold on to that tidbit of information.

But still, Ridge will be skeptical about how it could all come together so perfectly. And red flags will really go up when he sees just how much money Taylor is forking over for the baby. According to B&B spoilers, he’ll catch Taylor with a briefcase full of cash and it just won’t feel right to him, but at this point it will probably be out of his hands.

Plus, Steffy and Taylor will have a good explanation for everything. They’ll have met the birth mom directly, so it’s not like anyone would suspect that the baby in question might be stolen. And Ridge will just want his daughter to be happy, so he might lay off the questions after a while.

Still, Ridge may continue to get that nagging feeling that something is wrong. Do you think he’ll investigate further? Stay tuned to the CBS soap and don’t forget to check CDL often for the latest Bold and the Beautiful spoilers, updates, and news.