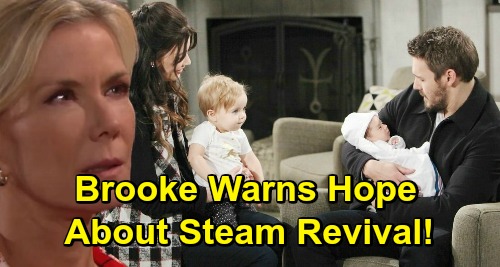 The Bold and the Beautiful (B&B) spoilers tease that Liam Spencer (Scott Clifton) will determine that honesty is the best policy. He’ll decide to come clean to Hope Spencer (Annika Noelle) about Steffy Forrester’s (Jacqueline MacInnes Wood) new baby girl and hope she understands. Liam will explain the adoption news as gently as possible. He won’t want to send Hope into a downward spiral if he can help it.

Hope will cycle through several strong emotions once she gets updates. She’ll be completely floored at first, so she should struggle to even wrap her head around this. Hope will certainly wonder how this happened so fast.

Liam will offer an explanation based on what Steffy’s told him. He’ll assure Hope that Beth Spencer will never be forgotten. Liam won’t want Hope to think Steffy’s new little girl is just a replacement, but she’ll undoubtedly feel that way. Her shock will turn to despair and anger, but she’ll manage to calm down sooner or later.

In fact, The Bold and the Beautiful spoilers say Hope will decide to nudge Liam toward Steffy, Kelly Spencer (Zoe Pennington and Chloe Teperman) and “Phoebe Forrester” (Rosalind Aune and Isabella de Armes). She’ll sense that his visit with the new baby helped him heal, so she’ll want more of that for her husband. Hope will remain stuck in grief, but she won’t think Liam has to stay stuck with her.

Liam won’t want to hurt Hope, but he’ll indeed be drawn to Steffy and the girls. He doesn’t know it yet, but they’re both his daughters. Thanks to Dr. Reese Buckingham’s (Wayne Brady) baby swap plot, Steffy is making Beth part of her own family. The Bold and the Beautiful spoilers say that scheme will lead to plenty of drama.

After Liam starts spending more time at Steffy’s place, Brooke Forrester (Katherine Kelly Lang) will express concern. She’ll find out that Hope pushed for it, so she’ll definitely be taken aback. B&B fans can expect a stern warning next. Brooke will think Hope is setting herself up for disaster here. We all know what a waffler Liam can be!

Brooke knows that as well, so she’ll warn Hope that she’s shoving Liam right into his ex’s arms. She’ll worry that Hope will end up heartbroken and alone if this keeps up. Will Brooke be right about that? Will Hope’s pain intensify due to a “Steam” reunion? We’ll keep you posted as other B&B details emerge. Stick with the CBS soap and don’t forget to check CDL often for the latest Bold and the Beautiful spoilers, updates, and news.