The Bold and the Beautiful Spoilers: Liam and Hope Fall In Love With Steffy’s Baby – Competition For Phoebe Erupts

BY hellodrdavis on January 26, 2019 | Comments: one comment
Related : Soap Opera, Spoiler, Television, The Bold and the Beautiful 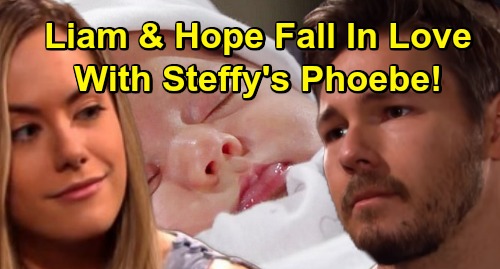 The Bold and the Beautiful spoilers tease that Hope Spencer (Annika Noelle) and Liam Spencer (Scott Clifton) will have a challenging time ahead. They’ve just lost their baby Beth Spencer, and their world has crumbled. Hope is despondent and can barely function due to the loss, and Liam is barely holding it together and trying to be strong for Hope.

But they’ll have to go on with life soon enough. According to B&B spoilers, Hope will finally go back to work at Forrester and resurrect her Hope For The Future line. It will be difficult, but she’ll force herself to be strong and honor Beth’s memory.

Nothing about the moving on process will be easy for Lope, but there will be one part of their lives that will be a particular challenge, and that’s the fact that Steffy Forrester (Jacqueline MacInnes Wood) will move ahead with her adoption plans. She’ll adopt the baby that she believes belongs to Florence (Katrina Bowden).

The adoption will be tough for Liam and Hope to take, as they’ll be forced to watch Steffy welcome home a new baby who’s the same age as Beth would be. Of course, viewers know that the baby that Steffy will adopt and name Phoebe is in fact Beth.

While it will be difficult for Liam and Hope, they’ll ultimately support Steffy, and eventually Hope will meet baby Phoebe. She’ll probably be emotional because she won’t be able to help think about Beth, but she’ll have no idea that the baby in front of her is actually her daughter.

Still, Hope will feel a remarkable and strong connection to baby Phoebe. She won’t be able to explain it, but it will feel like she already knows this baby. And it looks like Liam will soon admit to Hope that he got the same feeling around Phoebe.

Lope will probably just chalk up their feelings to grief, but their feelings of a bond with baby Phoebe won’t go away. In fact, the feelings may just get stronger over time. We’ll see how Liam and Hope handle their feelings going forward, but it seems that they’ll continue to feel a strong pull toward little Phoebe.

Do you think that Steffy will get concerned about how close Lope feel toward Phoebe? Stay tuned to the CBS soap and don’t forget to check CDL often for the latest Bold and the Beautiful spoilers, updates, and news.