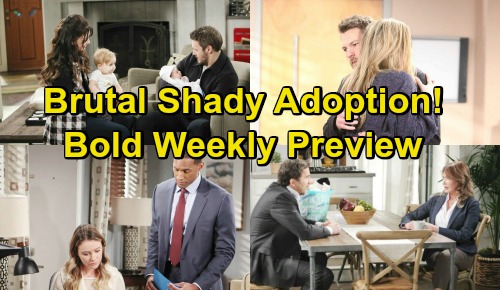 The Bold and the Beautiful (B&B) spoilers for the week of January 28-February 1 tease that some risky business is on the way. Dr. Reese Buckingham (Wayne Brady) just scored $50,000 as the down payment for Steffy Forrester’s (Jacqueline MacInnes Wood) new bundle of joy. Dr. Taylor Hayes (Hunter Tylo) gladly handed it over to ensure her daughter’s happiness. She’s just happy this family’s coming together.

Unfortunately, Taylor is also blind to the fact that all of this is incredibly shady. She’s just too close to the situation right now. Taylor’s smitten with the baby like Steffy is, so she just doesn’t see the problem. Ridge Forrester (Thorsten Kaye), on the other hand, will definitely spot some red flags. He’ll do his best to make Taylor open her eyes and see that none of this adds up.

Ridge will see the money for Taylor’s next payment and notice that it’s a huge amount. He’ll think it’s highly suspicious that Florence “Flo” Fulton (Katrina Bowden) will only take cash. However, that won’t be the only warning sign. The speed of this process alone will be enough to leave Ridge concerned.

Ridge just won’t understand how this baby fell into Steffy’s lap. He’ll lash out at Taylor when she can’t offer satisfactory answers. Taylor promised to keep Dr. Reese Buckingham’s name out of it, but will she keep her word? Ridge will be awfully riled up, so we’ll see how much Taylor ends up blurting out.

The Bold and the Beautiful spoilers say Ridge just won’t think this feels right. It looks like he may tell Steffy that as well, but she’s already madly in love with Phoebe Forrester (Rosalind Aune and Isabella de Armes). Steffy and Taylor will find ways to explain away any suspicions. They’ll be determined to seal the deal on this adoption.

Carter Walton (Lawrence Saint-Victor) will draw up the adoption papers and hand Flo a pen to sign. She’ll seem nervous, but she should push through her anxiety and put her signature down. Flo will worry about breaking the law with this illegal adoption, but Reese will insist they crossed that line a long time ago. They’re in this deep, so they might as well see it through to the end.

Other B&B spoilers say Liam Spencer’s (Scott Clifton) heart will be full. He just met Steffy’s new baby, so it won’t take long for their connection to intensify. Liam won’t be able to nail down what it is, but he’ll know there’s something special about this little one. He’ll remain grateful that Steffy’s expanding her family, which includes him through Kelly Spencer (Zoe Pennington and Chloe Teperman).

Of course, Liam isn’t in the loop on the real connection! This is Beth Spencer, so he feels drawn to his own daughter. Will Liam get any clues about that soon? The Bold and the Beautiful spoilers say the excitement’s about to rev up, so stay tuned. We’ll give you updates as other news comes in. Stick with B&B and don’t forget to check CDL often for the latest Bold and the Beautiful spoilers, updates, and news.