BY hellodrdavis on January 25, 2019 | Comments: one comment
Related : Soap Opera, Spoiler, Television, The Bold and the Beautiful 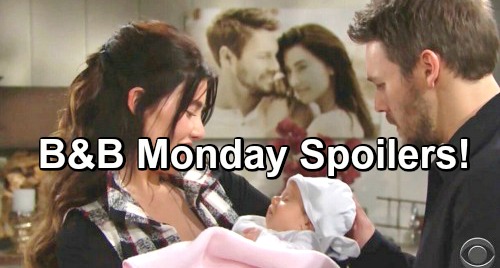 The Bold and the Beautiful spoilers for Monday, January 28, tease that things will get desperate for Reese Buckingham (Wayne Brady), as he arrives at the talent show to save his daughter Zoe Buckingham (Kiara Barnes) from the thug who is after her. Reese owes some serious cash to the thug’s employer, and the thug is determined to physically harm Zoe as payback for Reese not coughing up the money he owes.

On Monday’s episode, Reese will watch as Zoe, Emma Barber (Nia Sioux), and Emma’s friend Tiffany (Maile Brady) prepare for their audition. But the thug will be watching from the wings as well, and soon Reese will spot him. Reese will sweat it out, and he’ll think that if he can just get to the thug and pay him the $50,000 that Taylor Hayes (Hunter Tylo) gave him, he’ll be able to save Zoe.

Unfortunately, though, it looks like the thug will be hell-bent on hurting Zoe to prove a point. The thug will move toward her, and Reese will have no choice but to rush onto the soundstage and interrupt Zoe, Emma, and Tiffany. It looks like Reese will be successful in saving Zoe from harm, but now Zoe will be super suspicious of her dad.

Zoe already thinks that Reese is hiding something, and after this stunt, she’ll be more convinced than ever. She’ll be happy that her dad is taking an interest in her, but this will all seem very sudden and strange to her. Trailing her to her audition will be the last straw, and Zoe will decide to get to the bottom of what her dad is hiding.

Meanwhile, on the new B&B episode on Monday, January 28, Steffy Forrester (Jacqueline MacInnes Wood) and Liam Spencer (Scott Clifton) will continue their visit with the baby Steffy is going to adopt. Flo (Katrina Bowden) has stepped out for a walk on the beach, leaving Steffy and Liam alone with the baby.

From the moment that Steffy put the baby in Liam’s arms, he felt an instant connection, and he’ll continue to marvel at just how “right” this baby feels to him. He’ll think that the baby will make Kelly Spencer (Zoe Pennington & Chloe Teperman) a wonderful sister, and he’ll give Steffy his wholehearted blessing to continue with the adoption.