The Bold and the Beautiful Spoilers: Liam Drifts Toward Steffy’s Family, Serves as Dad to Phoebe – Hope Goes Berserk 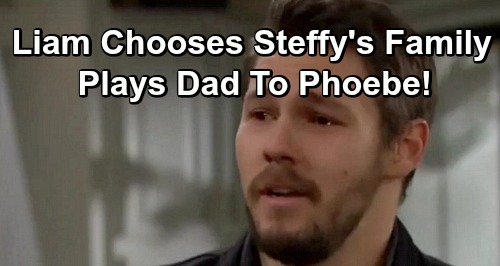 The Bold and the Beautiful (B&B) spoilers tease that Liam Spencer (Scott Clifton) will make promises to the women who matter most to him. He’ll want Hope Spencer (Annika Noelle) and Steffy Forrester (Jacqueline MacInnes Wood) to know where he stands. Liam has already made crucial vows to these ladies, but he’ll want to make himself perfectly clear. With so many changes going on, he’ll think it’s necessary.

B&B fans know Hope is really struggling with her loss. Beth Spencer’s “death” has crushed her spirit, so she doesn’t have much of her namesake right now. In other words, Hope feels completely hopeless. Steffy is feeling far more joyful since she’s about to adopt a sister for Kelly Spencer (Zoe Pennington and Chloe Teperman). However, she’ll definitely battle some guilt about that.

It may be hard for Steffy to bring “Phoebe Forrester” (Rosalind Aune and Isabella de Armes) home while Hope’s stuck in such deep grief. It’ll be even tougher once Hope finds out about the adoption. Nevertheless, Liam will want both Hope and Steffy to know he’s got their backs. He’ll make a promise to each of them and urge them to have faith in him.

The Bold and the Beautiful spoilers say Liam will have a heart-to-heart chat with Hope. He’ll encourage her to climb out of this mourning period. Liam may want to focus on them as a couple. Since Hope can’t even think about having another baby right now, Liam might think concentrating on their marriage is their best option. This ordeal has been a test, but Liam will hope they can pass it.

Liam will assure Hope that he’s always going to be in her corner. He’ll vow to be a great husband that Hope can truly count on. Unfortunately, Liam can be a bit of a waffler. He may run into some trouble keeping that promise. That’s because of another one he intends to make to Steffy.

The Bold and the Beautiful spoilers say Liam will remind Steffy that he’s going to be there for Kelly. He may suggest that he’ll be there for “Phoebe,” too. Liam may contend that he can be a father figure if Steffy wants him to. He’s already in Kelly’s life and Steffy wants Kelly to be close to her sister. It makes sense for Liam to be involved with both girls. Little does he know he really is a father to both of them!

Regardless, Liam will vow to be the best father possible. He won’t want to let Steffy down, but juggling the two sides of his life will be difficult. It seems likely that Hope will feel left out soon enough. She may think Liam’s moving on and building the “Steam” family he secretly wanted.

It sounds like more relationship hurdles are ahead for Liam and Hope. We’ll give you updates as other B&B news comes in. Stay tuned to the CBS soap and don’t forget to check CDL often for the latest Bold and the Beautiful spoilers, updates, and news.