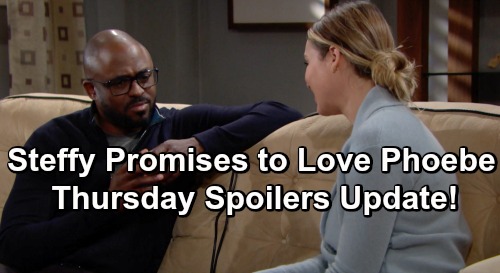 The Bold and the Beautiful (B&B) spoilers for Thursday, January 24, tease that Steffy Forrester (Jacqueline MacInnes Wood) will keep cuddling her new potential family member. She was overwhelmed with joy when she first met this adorable baby. Her future daughter even smiled back, so Steffy’s feeling like this is fate. She can’t help but wonder if they were always meant to be together.

Dr. Taylor Hayes (Hunter Tylo) will beam as she watches Steffy with this little girl. She’ll see how much love Steffy already has in her heart for her. Steffy will admit that she feels an intense bond with the kid. There’s an inexplicable connection here, so Steffy will think she has to take advantage of it. She’ll quickly decide that this is Kelly Spencer’s (Zoe Pennington and Chloe Teperman) new sister.

Steffy has tried not to get her hopes up about all this. She didn’t want to set herself up for heartbreak if the adoption fell through or it somehow wasn’t a good fit. However, that plan is out now that Steffy’s met the baby. She’ll love “Phoebe Forrester” (Rosalind Aune and Isabella de Armes) more every second she’s in her arms.

Steffy would be devastated if she wasn’t able to take this baby home with her soon. She’ll have to trust that Florence aka “Flo” (Katrina Bowden) will stick with her decision to give the kid up. Of course, Steffy wouldn’t blame Flo for changing her mind. She would certainly understand why since this little one’s so precious.

Thanks to Flo’s strange behavior, Steffy may even think this fake birth mom’s on the verge of backing out. Flo knows the details of Dr. Reese Buckingham’s (Wayne Brady) scheme, so she’s suddenly wary about the mess. She’s concerned about Hope Spencer’s (Annika Noelle) pain and the possibility of getting caught.

The Bold and the Beautiful spoilers say Steffy may pick up on the tense vibe, but she’ll probably just chalk it up to adoption nerves. She may think Flo needs reassurance that her daughter will be in good hands. Steffy will indeed make promises and hope Flo hands the baby over eventually. She has no clue this is Hope and Liam Spencer’s (Scott Clifton) child, so she’ll look forward to making this adoption official.

As for Liam, he’ll fret about the consequences of Steffy’s actions. Liam isn’t standing in Steffy’s way, but he knows Hope could be adversely affected. He told Wyatt Spencer (Darin Brooks) not to mention anything about adoption to Hope, which led to setback fears. Wyatt warned Liam about what this could do to the grieving mother, so Liam may mull over that warning in Thursday’s B&B episode.