BY hellodrdavis on January 23, 2019 | Comments: one comment
Related : Soap Opera, Spoiler, Television, The Bold and the Beautiful 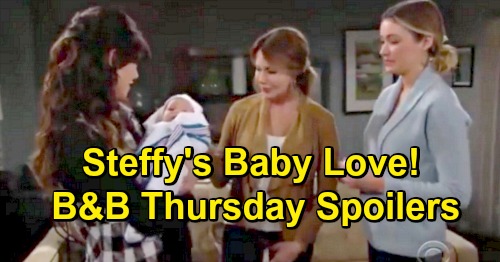 The Bold and the Beautiful spoilers for Thursday, January 24, tease that Steffy Forrester (Jacqueline MacInnes Wood) will be enchanted with the infant that Flo (Katrina Bowden) has just put in her arms. Steffy will think that the baby is absolutely beautiful, and she’ll feel an instant connection to her.

Of course, Reese Buckingham (Wayne Brady) will be nowhere to be seen during Steffy’s baby visit. He doesn’t want Steffy putting two and two together and sensing a connection between this baby and the baby Hope Spencer (Annika Noelle) lost on Catalina Island.

Viewers know that the baby Steffy’s holding is fact Beth Spencer, and that Reese led Hope and Liam Spencer (Scott Clifton) to believe that Beth died. But Steffy will have no idea about the connection and she’ll wind up thinking that Flo’s baby would make Kelly Spencer (Chloe Teperman and Zoe Pennington) a great sister.

Meanwhile, on the new episode of B&B on Thursday, January 24, Liam will get a warning. He told his brother Wyatt Spencer (Darin Brooks) about Steffy’s newfound adoption opportunity, and Wyatt didn’t think that was such a good idea. Wyatt’s worried that it will just be too soon after Hope’s loss for Steffy to welcome a new baby home.

On Thursday’s episode, Liam will ask Wyatt to keep some sort of secret. He may want Wyatt to keep lid on Steffy’s adoption opportunity for him. It looks like Wyatt will agree, but he’ll issue his brother a warning about keeping secrets from his wife.