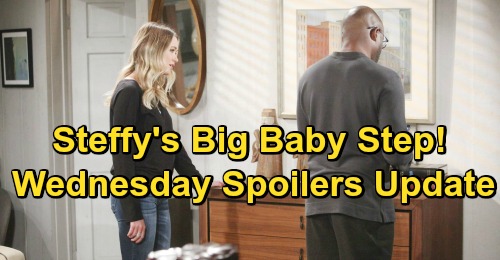 The Bold and the Beautiful (B&B) spoilers for Wednesday, January 16, tease that Will Spencer (Finnegan George) will make his father beam with pride. Of course, the quickest way to do that is to show off some serious financial knowhow. The only thing Bill Spencer (Don Diamont) loves more than money is his family, so he’ll get a little taste of both in some heartwarming scenes.

Once Will displays some profitable skills, Bill will let his son know he’s impressed. “The Bold and the Beautiful spoilers say they’ll connect over cash and just enjoy each other’s company. Katie Forrester (Heather Tom) will notice how close Will and Bill are getting. She’ll be pleased at the way Bill has stayed involved in Will’s life since the custody battle. He meant it when he said he would step up.

At some point during this family bonding session, Will’s going to ask an interesting question. It’s sure to catch Katie off guard, but she’ll answer it honestly. B&B spoilers say it’ll involve Katie’s feelings for Bill. Will will wonder if his mom still loves his dad, so that could bring some awkward moments.

Katie will assure Will that there’s always going to be love between them. She may not be married to Bill anymore, but they’re still a family. Katie will promise Will that nothing could ever change that. In fact, a “Batie” reunion could be brewing down the road.

Katie is currently with Thorne Forrester (Ingo Rademacher), but that should change soon enough. Thorne will grow jealous of Katie and Bill’s lingering connection, so The Bold and the Beautiful fans can expect some trouble. It won’t be long until Katie and Thorne are headed for a split.

In the meantime, we can watch Steffy Forrester (Jacqueline MacInnes Wood) inch toward another shot at motherhood. She’s a great mom to Kelly Spencer (Zoe Pennington and Chloe Teperman), but she’d love to give Kelly a sister as well. Adoption is the easiest route for Steffy, especially since there’s already a baby up for grabs.

As Steffy keeps mulling over the offer, Dr. Taylor Hayes (Hunter Tylo) will be downright giddy. She’ll sense that Steffy’s about to go for it, so she’ll seek confirmation. The Bold and the Beautiful spoilers say Steffy will agree to take the next step. She’ll believe this could actually be fantastic news for her family, so she’ll want to meet Florence and hopefully get the process started.

Dr. Reese Buckingham (Wayne Brady) will do his best to keep his name out of this and pass Beth Spencer over to her new mother! We’ll give you updates as other B&B details emerge. Stick the CBS soap and don’t forget to check CDL often for the latest Bold and the Beautiful spoilers, updates, and news.