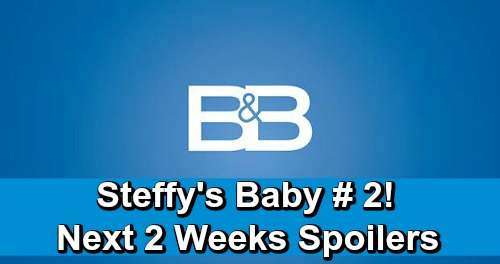 The Bold and the Beautiful (B&B) spoilers for the next two weeks tease that some shocking baby developments are on the way. During the week of January 14-18, Liam Spencer (Scott Clifton) and Hope Spencer (Annika Noelle) will take steps toward healing – at least they’ll try to. Letting go of their previous Beth will certainly prove difficult.

Liam will find solace in helping Steffy Forrester (Jacqueline MacInnes Wood) care for their daughter. He’ll be glad he still has Kelly Spencer (Zoe Pennington) to light up his life. Liam will promise Steffy and Kelly that they’re always going to be a family. He’ll assure them that he’s never going to let them down.

Over with Hope, she’ll get a visit from some comforting faces. Sally Spectra (Courtney Hope) and Wyatt Spencer (Darin Brooks) will want to check on Hope in the week ahead. B&B fans can expect Sally to have a friend with her at some point. She’ll be seen with an adorable dog, so perhaps she’ll think the pup will lift Hope’s spirits.

Later, Hope and Wyatt will reflect on a dark time in their lives. They’ll remember how Hope suffered a miscarriage when she was pregnant with their child. Hope will feel like she’s cursed when it comes to babies, but Wyatt will give her a pep talk. He’ll feel confident that Hope will get the family she’s dreaming of someday.

Meanwhile, Steffy will be busy crafting her own perfect family – with a little help from Dr. Reese Buckingham (Wayne Brady) and Dr. Taylor Hayes (Hunter Tylo), of course. The Bold and the Beautiful spoilers say Reese will convince Taylor to accept the baby he’s offering for Steffy. Then, it’ll be up to Taylor to convince her daughter. Steffy will eventually get on board and prep for baby number two.

An old pal of Reese’s named Florence aka “Flo” (Katrina Bowden) will introduce herself and get the ball rolling on the adoption. She dabbles in this on the side, but her main gig involves a casino in Las Vegas. B&B fans can expect Flo to cause some trouble for Reese, but he’ll be grateful for her help.

Flo will assist Reese as he hands over what we can assume is Beth Spencer and gets the money ne needs in return. Over with Bill Spencer (Don Diamont) and Katie Forrester (Heather Tom), they’ll share some warm moments as they bond over their son. Will Spencer (Finnegan George) will spark some new family memories and leave Thorne Forrester (Ingo Rademacher) feeling left out of the fun.

During the week of January 21-25, Thorne’s jealousy will grow stronger. The Bold and the Beautiful spoilers say he’ll call Katie out on her growing interest in Bill. Thorne will suggest that Katie seems to like this “changed man” before her. Katie may admit that she doesn’t, but she’ll probably be in denial about the reconnection that’s happening. That’s something that’ll have to hit her hard later.

Finally, Flo will keep up her efforts to help Reese. She’ll serve a few different roles as she keeps the thug at bay, protects Zoe Buckingham (Kiara Barnes) and gets Beth’s adoption going. The Bold and the Beautiful fans won’t want to miss the twists and turns ahead.

It sounds like the next two weeks will bring some serious excitement. We’ll give you updates as other B&B news comes in. Stay tuned to the CBS soap and don’t forget to check CDL often for the latest Bold and the Beautiful spoilers, updates, and news.