The Bold and the Beautiful Spoilers: Wednesday, January 16 – Steffy Meets Flo’s Baby, Falls In Love – Will Struggles With Dad Issues

BY hellodrdavis on January 15, 2019 | Comments: one comment
Related : Soap Opera, Spoiler, Television, The Bold and the Beautiful 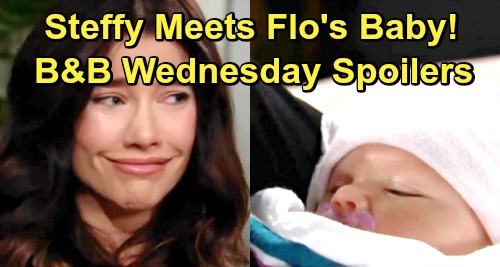 The Bold and the Beautiful spoilers for Wednesday, January 16, tease that Steffy Forrester (Jacqueline MacInnes Wood) will really warm up to the idea of adopting the baby girl that Reese Buckingham (Wayne Brady) introduced to Taylor Hayes (Hunter Tylo). Of course, Steffy was surprised by the sudden adoption opportunity, but the more she thinks about it, the more she’ll want to go for it.

Steffy really wants a baby girl who is close in age to Kelly Spencer (Zoe Pennington and Chloe Teperman), but if she adopts through an agency, then she’s going to face months of red tape. A private adoption, on the other hand, could happen quickly, and will sound like a dream come true for Steffy.

The more Taylor and Steffy talk about the possibility of adopting Florence’s (Katrina Bowden) baby, the more Steffy will be into the idea. It looks like she’ll ultimately say yes to meeting Florence and the baby.

Meanwhile, on the new B&B episode on Wednesday, January 16, Bill Spencer (Don Diamont) will spend some quality time with Will Spencer (Finnegan George). Bill and Will have been getting along great lately, and B&B spoilers say that they may even do some more father-son coaching on finance.

The two seem to enjoy talking about what Bill does for a living and Will always seems interested in learning about making money. On Wednesday’s episode, Will is going to impress his dad with his ability to turn a profit, and it will make his papa proud.

But Will is also going to have some serious questions about his family situation. He’ll have noticed that Katie Forrester (Heather Tom) and Bill are getting along much better now, and he’ll want to talk to his parents about the situation. B&B spoilers say that Will is going to ask Katie point blank whether she still loves Bill.

This could be an awkward situation, but Katie will handle it well. She may say that of course a part of her will always love Bill. We’ll see if that satisfies Will, or if he will have more questions about his family. It’s bound to be a little confusing for him since Thorne Forrester (Ingo Rademacher) is in the picture, so he may have questions about what his family is going to look like going forward.